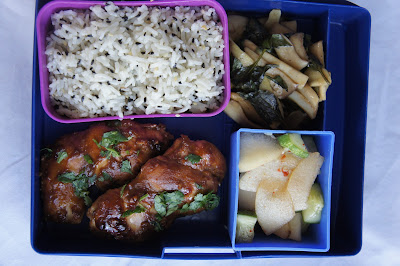 Finally getting around to posting on last week's bento. I'm finding going with an Asian theme tends to make for very quick turn around on cooking time. Preparation is key, if you can get everything chopped up and sauces done ahead of time then cooking is pretty straightforward and simple. Usually just a quick stir fry and you're done. So no narrow ethnic theme this time just a few dishes from Japanese and Chinese cooking. 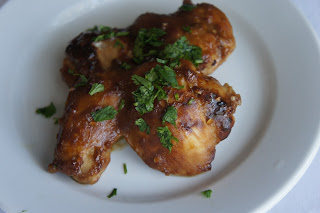 For the main protein I put together this miso glazed chicken. Very simple marinade of miso, soy and brown sugar which sat with the chicken overnight. Some people will argue for shorter time saying that I'm risking the chicken to be too salty, but I used a white miso paste (which tends to be less salty) and I've done it before without much problem. So for what it's worth I did the experiment for you and overnight didn't hurt at least with chicken. As the chicken baked I boiled down the marinade and used it to glaze the chicken. 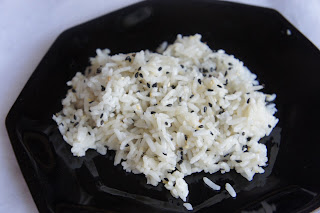 Can't have Asian food without serving some sort of rice. I decided I wanted to make it interesting instead of punking out with simple jasmine rice. After cooking I tossed it in a bit of sesame oil and added both black and white sesame seeds. This turned out to be very fragrant with notes of jasmine intermingled with sesame. I even broke out of my low carb shell to have a bit more than I should have, very tasty stuff. 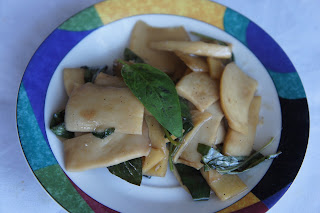 So as I posted earlier I wanted to do a bit more with the King Oyster/Abalone mushroom. Abalone mushroom is probably a very good name for this mushroom, some friends of mine had this at a Chinese restaurant and went looking for the dish in menu under the seafood section only to discovery it was a mushroom they were eating. I think the mushroom has quite a wide range of applications because of it's very durable texture. Anyway very meaty fungi was tossed in with some bamboo shoots and Thai purple basil. The sauce foundation was made with black vinegar, a new ingredient for me. It's kind of hard to explain the taste of black vinegar, it's not as strong as standard vinegar and has some elements that remind me of malt vinegar (but not quite). Either way this dish turned out to be very popular with my bento-ers. 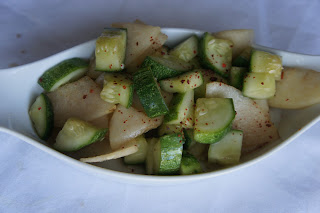 For a quasi desert and quasi salad I went with this asian pear and cucumber salad with a chili vinegar dressing. This is similar to a garlic quick pickle that I do, adding the pear and chili was an interesting addition.