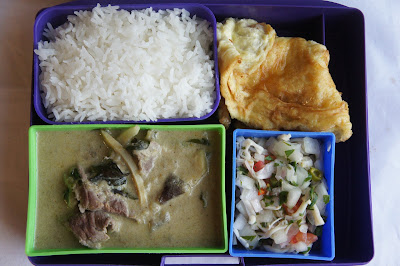 This isn't technically my third Thai bento, but it is the third one that I've labeled as "Thai Bento" and I really didn't have another theme to follow with this one and someone wanted Thai food.  I had a few new Thai recipes that I wanted to work on so this request worked out well.

I've already professed my love for green curry. Here I went with a beef sirloin with Japanese eggplant in green curry sauce. I kind of screwed up here, I should have sliced the beef a lot thinner to keep the beef tender, that or I should have gone with large chunks of beef (probably preferrably beef short rib) and gone the slow cooker route. In this case (although everyone gave comments on really liking the dish) I felt the beef too tough and the eggplant a tad too mushy. Slow cook is the best call here since I don't eat up a burner space and can afford to stage the eggplant into the crock at the last second and get better texture. 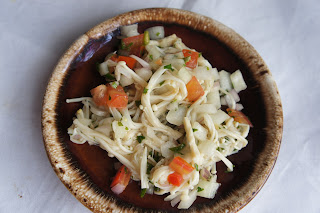 For a salad I found a salad called Yum Hed Khem Thong "Spicy Golden Straw Mushroom Salad". There was an option for shrimp but since this was a side dish I opted out of it. The salad resembled a chunky salsa and a healthy amount of spice was added to the dish in the form of chopped whole bird chiles. I felt the sour would help counter the richness of the green curry, but I think the cumulative heat from the curry and this dish really did a number on some people. The mushrooms had a texture of noodles. I'm not sure I'll recreate this dish (at least not without a lot of modification) but I had quite a few positive comments so I'm not sure where to go with this one. 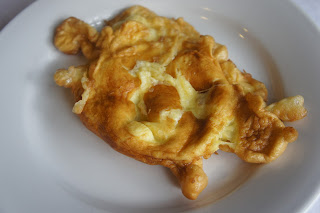 I've only recently noticed the dish Khai Jiao "Thai Omelet" and on a lark I ordered it. Wow, this was a very pleasant find. As I started researching this dish I found that it is considered a "comfort food". The texture is pretty neat, the outsides of the "bloomed" egg is nice and crispy but the center of the egg is fluffy and light. Typically the egg is served right out of the wok over rice with some sriracha hot sauce. Without exception this dish was the fan favorite. 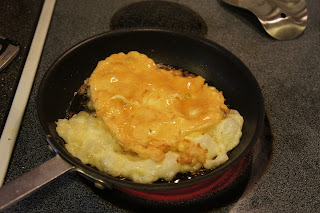 I had to take a picture of the cooking process. Since I have a flat top stove, my wok is pretty much worthless here, so I used a large skillet and a lot more oil. What you see is two eggs, a few drops of lime juice, fish sauce, corn starch and a whole lot of elbow grease to make sure there weren't any corn starch lumps. The mixture is then "dropped" about a foot and a half above the very hot skillet of oil. The egg immediately "blooms" and a short 20 seconds later you flip it and wait another 20. Boom you're done!

Thanksgiving came up so I'm probably not going to get another bento in for the holiday. But I'm going to be doing some travel so you'll be seeing some food posts from my trips. Happy Holidays all!