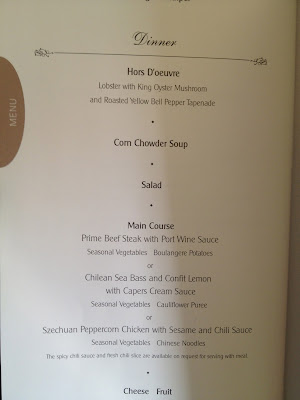 Short post on another leg of my trip and the business class treatment. I realize that when you go business class you're paying a pretty hefty premium, I think the cash amount is like 2x or more depending on where you're going. Even with miles and cash it's a considerable sum if you translate the miles you spend into actual money. But the upsides? Seating is bigger (2x), they're very "lenient" on baggage weight, priority seating, real forks and knives, it's really night and day. And then there's the food, as in, "not only do you get food and free booze, but they try to make it nice". Instead of a theme dinner designed by a Michelin star chef, this time I picked from the "regular" selections. 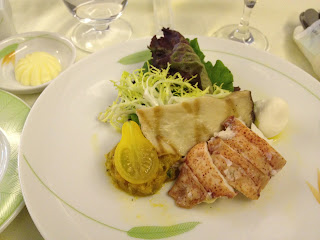 First course Lobster with King Oyster Mushroom and Roasted Yellow Bell Pepper Tapenade. Err wow, kicking it off with lobster. Very tasty, I liked that they had nice grill marks on the king oyster mushroom. This mushroom goes by many names, the chinese name is abalone mushroom for it's meaty/chewy abalone texture. It's often used in a lot of vegetarian dishes for it's texture qualities to mimic meat. It was an nice pairing with the lobster. The tapenade wasn't very remarkable. 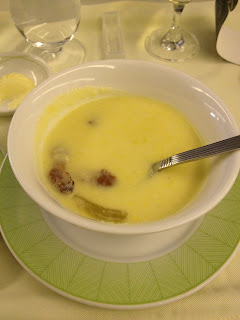 For soup we had a corn chowder soup. The soup was nice and creamy different from any corn chowder soup I've ever had here in America. Not as sweet and no sign of actual corn kernels for texture just a smooth blended soup with some bits of roasted vegetables. 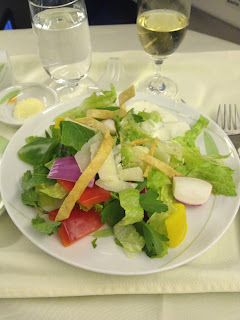 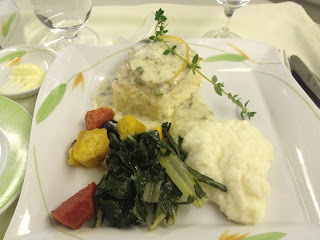 Chilean Sea Bass and Confit Lemon with Capers and Cream Sauce. It was accompanied with spinach, roasted root vegetables and a cauliflower puree. The fish was nicely cooked, not dried out. The cream sauce was not too heavy. I didn't care for the confit lemon it was bitter. I have to say that the attention to detail is impressive considering we're talking about airplane food. Adding that fresh sprig of thyme again, couldn't have been done by anyone other than the flight attendant staff just prior to serving it would have fallen off otherwise. 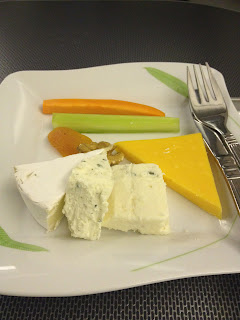 Cheese course: Brie, Cheddar and I believe a Gorgonzola 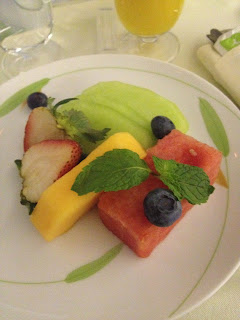 Fruit plate with a sprig of mint 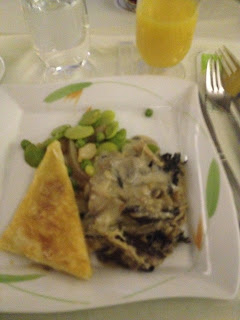 Sorry about the pictures, it was kind of dark and I took the photos with my iphone. I'm not exactly sure what this was. I believe it was my "Western breakfast" it was a piece of puff pastry and some sort of egg mushroom scramble and green pea and lima bean side dish. This is certain not anything I've ever eaten in "the West" for breakfast. It did taste good, but not knowing what I was eating was a little disconcerting.

Please bear with me I'll be doing a few more of these types of posts since life is so hectic I've been unable to produce my regular bentos.
NIAB yammering