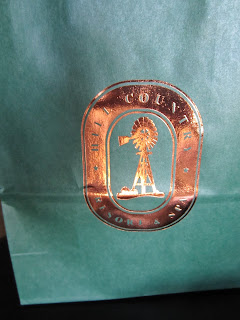 So it's about that time again. I've burnt myself to a crisp both in terms of life and work. I'm really bad about taking vacations for two reasons. First, I'm not a big fan of going out to a destination vacation on my own. I like sharing experiences and so I feel bad when my significant other is unable to accompany me. Two, I'm just bad at drawing my own boundaries even though I know how refreshed I feel when I do take time to unplug from my email and truly take time off.

Well I came up with a nice compromise I decided to jet down here to San Antonio and stay at the Hyatt Resort Spa. There's a lot of advantages to this type of vacation. It's not much of a destination, so I don't feel to bad since my girlfriend doesn't have the vacation time to spend on this vacation (we have others planned). It's close enough that my girlfriend could come up with me over the weekend and spend time with me. It's on a golf course so I get to try to see if I like golf. It's a resort! It's a place designed to make you chillax. And finally, it's next to Six Flags, so one of my day trips this week is to go and ride as many roller coasters as possible since kids are still in school!

Anyhow, I wanted to post on an nice little meal we had at the resort in the main restaurant. The restaurant is pretty good for a large kitchen restaurant. It caters to the bulk of the hotel guests and although pricey  it's not nearly as pricey as the higher end restaurant at the other end of the resort (I've got a post on that one coming too). However, I was taken aback enough my surprisingly good food on my last dinner with my girlfriend to take some photos and put a post. 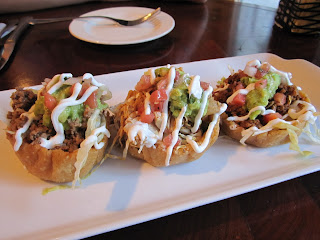 First we got an appetizer, the "Tres Sopes". Their fried masa shells topped with a trio of meats. From left to right ground beef, shredded chicken, and chorizo. The chorizo was my favorite I think the flavor of the pork went well with guac and sour cream. The masa shells were very nice and flaky. 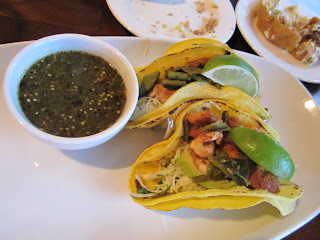 My girlfriend ordered the fish tacos. Mahi mahi  topped with a chili lime vinaigrette slaw and served with a tomatillo sauce. They grilled/toasted the corn tortillas and the whole thing had some great flavor. I thought the fish was a little over done but the flavors were nice. Presentation wasn't the best but again, this was main dining this was the place folks went to after a day out in the sun floating in the lazy river or walking around on the nature trail. 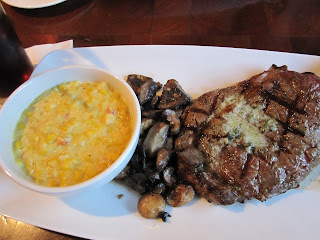 Finally for dinner I got the grilled Ribeye. Now if you've been reading you'll know that I'm very particular about steak, in fact I rarely order it out anymore since sous vid-ing at home always produces a better result. I didn't hold up much hope here either as the steak was about one inch thick and I had ordered it "medium rare". To my surprise they got it correct at medium rare. The steak was very flavorful and cooked well.  The biggest surprise for me were the sides! First up was a southwestern creamed corn. The side dish had a distinctly smokey flavor and the corn was extreme fresh, not that extra sweet stuff out of a can, this clearly came off the cob or they did a good job fooling me. The second side was a sauteed mushroom with a bit of truffle oil. The truffle oil really put the dish over the top, how else to get more mushroom flavor than to add oil infused from the king of mushrooms. Such a simple thing but totally added a touch to the dish that made it special I'll need to remember this trick and  put this in a bento somewhere.

Anyhow back to vacation. I hit those rollercoasters tomorrow!
off topic southwestern steak vacation yammering