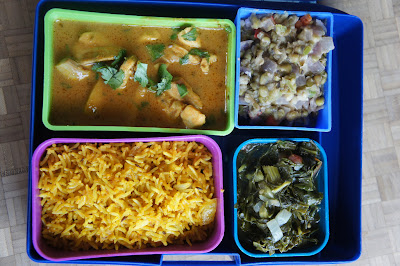 I had a hell of a time getting the title photo into place. For some reason every time I tried to upload the photo it turned it on it's side. I was going to blame blogger for this but I finally fixed it by uploading via my mac. GRRRR. Who to blame? My browser or my OS. Ok.ok. in with anger out with love. WOOOSAH.

Originally I was going to go with another Indian theme since curries seem to be very popular with my bentoers but then I remembered I have a co-worker from Kenya so I quizzed her a bit about Kenyan dishes and started my research from there. Like many cuisines, Kenya draws on influences of regions around the area, Arab, Indian, and surprisingly English cuisine. 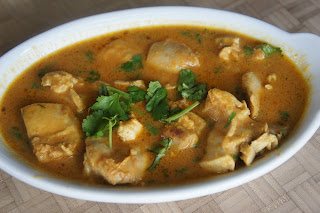 The main dish is called Kuku Paka, it's a chicken in a coconut based curry sauce. This is a nice combination of the Indian influences of curries as well as the English use of actual "Curry Powder". Curry powder (after digging around) was an English invention to mimic the flavors of Indian foods that the British discovered when they colonized India. The "gravy" of the curry comprises of a tomato puree and coconut milk. It's a lot thinner than an indian curry but has a great flavor with a twinge of sour from the tomato. This recipe says serves 4-6 so I doubled up and after serving 8 I *still* have 3 quarts of this stuff in my fridge (not necessarily a bad thing). 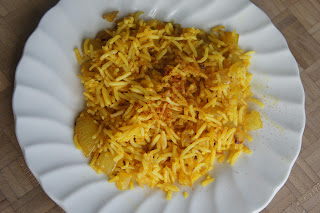 You can't have curry without having some rice. I didn't want to go with the same old basmati rice. This one is a quasi "fried rice" with turmeric, onion, cumin, and cayenne. The cayenne certainly packed a good punch. I liked that it was a simple and dresses up the rice with some flavor. 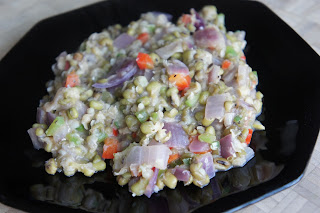 This dish is called Dengu. It's reminiscent of an Indian Dal. It's made with a green mung bean cooked with red onion and tomato but not cooked down as much as a Dal. I found the flavor to be a bit flat and my coworker had mentioned another dish to substitute as I believe she knew it was a little bland. I went for it because I had half a bag of mung bean to use up. (you'd be surprised what ingredients I have stocked in my pantry) Anyhow, I ended up adding a bit of lemon juice to punch up the flavor. I only added about three tablespoons to the pot and it brightened up the flavor and I couldn't even detect the lemon flavor. 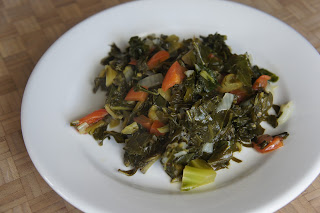 Finally I wanted some vegetables to round things out and decided on this Sukuma Wiki. It literally means "stretch the week" which I take to mean inexpensive filler. I went with a mixed green of collard, mustard, and kale. I cooked this down and braised in some chicken broth. Very tasty and very good for you.

Don't know when my next bento will be. I'll be doing some travel so I might post something from my "near-cation".