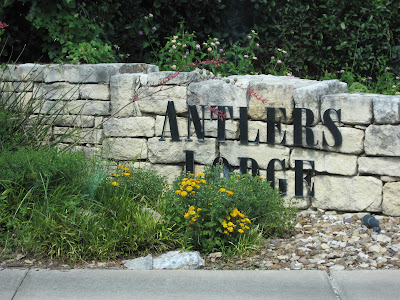 Still on vacation. I was talking to one of the staff here at the resort asking about "must try" places in San Antonio and was met with the same reply as I got from the concierge, "um. that's a good question" I was finally directed to a couple of pizza places but since I'm low carb-ing it those were out. I decided to try the resort's fine dining option at the Antlers Lodge. I wandered in early and they apparently let my t-shirt wearing self slide by their dress code policy (I was otherwise compliant).  Let me say, "wow!" this was an excellent meal, I only wish I went there three days prior so my girlfriend could have experienced the food too. 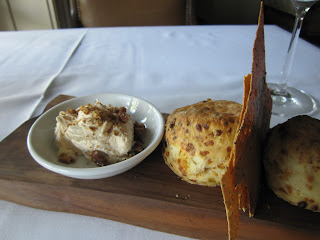 They started off with a cheddar biscuit and laver with house made butter. Wait, house made butter? I had to question the waiter, "did you mean you house compounded the butter? or did you actually mean you guys made the butter?" Apparently they churn their own butter and added candied pecans. And apparently they mix it up and make various butters all the time.  It was quite tasty. The butter was very fluffy and light and I knew I needed to add a few more mins on the elliptical tomorrow. 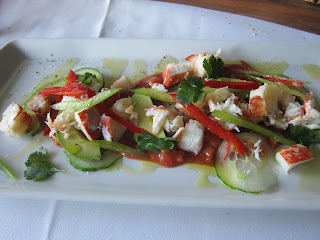 I normally would have a partner in crime helping me with a giant order of food so I could taste everything. Fortunately, the hotel rooms come equip with a dorm fridge so my leftovers are chilling nicely. I started things out with the "cold lobster", which came with avocado and a cocktail bbq sauce with red onions and cucumber. Very tasty. I think I got a good amount of claw meat from the texture of the meat but the few pieces of tail meat were delicious. 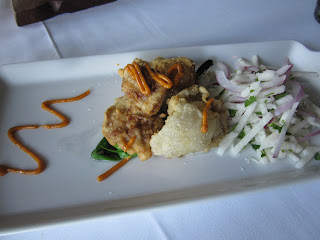 Next was the Chicken Fried Oysters. The oysters were delicious, the crust was very thin and not too overwhelming. The sauce that you see was a paprika aioli, I still wonder if they used some cayenne too since the sauce had a bite to it. The jicama slaw was nice and refreshing to cleanse the palate. 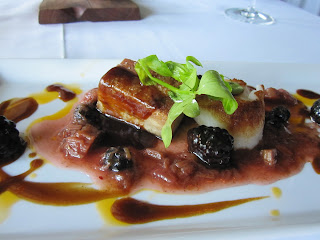 Pork belly was on the menu and that was a "must have". Pork belly and scallop (surf and turf) with a blackberry pear (?) chutney. I detected cumin or some other smokey flavors in the sauce. The scallops were tender to perfection and pork belly... well nuff said. 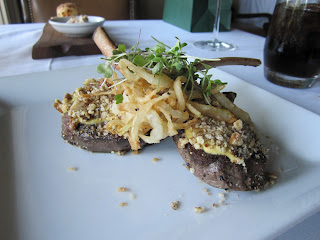 Finally my entree was the Venison chops I accompanied it with roasted mushrooms (they should take a cue from their sister restaurant and add the truffle oil). Wow! The venison was crusted in pecans and a mustard wet rub. The mustard really brought out a bright note and complimented the gamey quality of the meat. My very knowledgable waiter was 100% correct on pointing me to this dish.

I'm going to have to go back and try the antelope since I'm here...  More soon!
vacation wild game yammering