Meat Bento: It's what's for Lunch 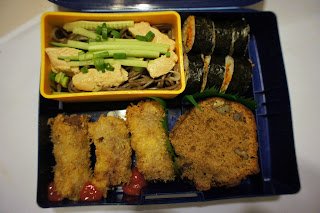 It's a New Year and always hard to get back into the rhythm of things when you've had a whole month to derail yourself. I managed to finally get a free weekend to put together a Bento but I haven't had much time to consider a theme. After four to five years it's getting more and more difficult to think of untried themes so I asked one of my eaters to come up with something for me. After careful consideration he comes back with "Meat", everything had to showcase meat. To be a little more fun, I added the stipulation that each course had to feature a different "meat". The difficulty was to tie the dishes together so that each course wasn't such a jarring experience so after a bit of research I went with "quasi" japanese.

We start in Beef land with this Fried Negimaki stuffed with King Oyster Mushrooms. I have to give credit to JustBento for the idea although I underestimated the effort of making 30 of these things. I went with the King Oyster Mushroom because it's got a really solid texture that I could still cut into large strips to fit inside the beef and seasoned it with a bit of salt and pepper. I'm still on the fence about fried foods in the bentos, they re-heat poorly, most folks ignore my advice to use a toaster oven and the microwave would the turn the fried parts into mush. I'll have to see how my bento-ers did this time around. I added a bit of Sriracha to add a bit more flavor. I think for next time, I'll make it a true Negimaki and glaze the inside of the roll with Teriyaki sauce (I'll spare the outside as it would interfere with the crust).

On to chicken. Nothing Earth shattering with this Chicken with Soba Noodles in Spicy Peanut Sauce. Again, this dish tends to have bento issues because when it chills the sauce locks up and it turns into a giant pile of noodles all glued together. A gentle reheat in the microwave fixes the problem. The chicken was quickly poached in some salted water. The peanut sauce consisted of peanut butter, sesame oil, soy sauce, and a bit of chili oil I had on hand for some spice. I ended up using only half of the stated amount of sauce, it would have been way too overwhelming otherwise. Rather than a bento this is definitely a quick lunch party dish. Prep up night before then boil the noodles and put it all together. Very tasty dish and I can see it being a light crowd pleaser.

I had some dried salmon "sung" on hand, I had been meaning to try it out as I usually buy the "Pork Sung". This seemed like a great time to make use of the unusual ingredient. I featured the pork sung version of this roll in my second bento. This is the same roll just using the salmon instead (plus egg and chinese pickle). Honestly I can't say that there was a whole lot of taste and texture difference. Still yummy. Sorry about the picture, I need to get a new lighting rig, my NEX-3 doesn't do as well under fluorescent lights. You can always tell when I've lost my daylight while cooking. Photoshop does a reasonable job but you can still tell which ones are in natural light. You can tell when I have a bento that runs long when I have mixed lighting like this. Actually what I should say is "if it's all uniform natural lighting you know I was able to put together a quick lunch".

Finally the big challenge! I think the intent behind selecting "Meat" as the theme was to challenge me to use meat in a dessert. I could have side stepped this because I don't always put in a dessert but what fun would that be. I scoured the web looking for something interesting. Lots of interesting meat desserts lots involving bacon. Since "putting bacon in anything" seems to be pretty popular I filtered those out of the pile. I then filtered out anything that had too many steps or too intricate and we end up with "Sausage Cake". Apparently this is an old native Native American recipe. This doesn't pre-date colonial times since it was the Spanish that introduced the pig to the new world so I'm not exactly sure when it was developed or if another animal was used as a substitute. Ground pork is used as part of the batter, you first beat it together with the sugar until well incorporated. I will admit to some hesitation as I put this into the oven. (I was disturbed enough to tweet about it) As it turns out this wasn't a really bad cake. I think a good dark coffee would have gone quite well with a slice. It's like a fruitcake (I omitted the fruit), dense and sweet (but not syrupy). Someone said it reminded them of a dense banana nut bread. I'll probably stay away from making it again, but I think this will rate with the most interesting dish I've baked.
I have to say that this was probably not one of my best bentos. I'm still waiting to hear back from my bento diners. It certainly took me a lot of time to produce, I *barely* fit inside of budget, and the reheat challenges I talked about. All meat really made for a heavy box. I should have opted to somehow include more greens in the menu. Anyways lesson learned, better to come up with my own themes or face some weird oddball request. I'm going to have to pick something easier this next time around.
Box Contents
beef chicken fish japanese meat pork salmon