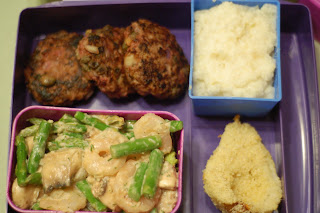 Back on track with another bento! It's gotten harder and harder to come up with new themes every week and I needed a bit of inspiration so I went over to the local Half Price Books and went through their ethnic cookbooks to scratch up some ideas. I tend to look for a nice worn out "old" looking cookbooks, usually those are the ones that have the super old school recipes that interest me the most (from a research standpoint). I did pull up some nice relics, so I'll be busy compiling, testing and cooking and hopefully come up with some new ideas and themes I can try.

This week I went with the Swedish cookbook I found. I'm not certain how much of it is authentic. I know the Ärtsoppa is traditional and the rest do use typical ingredients but I avoided a lot of the items that wouldn't reheat well (fish primarily) and the more cliche items (like meatballs and dumplings) which didn't leave much left to pick from the book and I didn't have as much time as usual to do a deeper dive on the internet. So here goes:

The main dish is a blend of a few recipes. I liked this one recipe for a blue cheese lamb burger, but wasn't impressed with the amount of fat and calories, so I blended this with a famous dish called: Biff a la Lindström. Apparently this was served at Hotel Witt in Kalmar and named after a Swedish inventor that was a frequent patron and brought the recipe from Russia. The beef patty was mixed with beets and capers and finished on a skillet. I really wanted to make use of some ground lamb but for some reason lamb is in short supply, and I tried veal since it was cheaper. Ultimately, I found the Veal to be too texturally soft and gamier lamb to be a better taste complement to the salty, sour capers. Fortunately, the store had just enough lamb that I could stretch out enough patties.

What Swedish meal would be complete without some form of seafood? For a salad I put together this simple Västkust Salad (west coast salad), not sure of it's authenticity but it sure did taste good. It's a mayo based seafood salad that features, shrimp, mussels, crab, asparagus and mushrooms. I went with the lower calorie/fat olive oil mayo which in my opinion carries a ton of flavor compared to the lowfat mayos. This is the only seafood component I put into the bento, I realize that Swedish food relies heavily on seafood, but I couldn't subject the lunch room to the smells of re-heated fish from the microwave (if you haven't made this faux pas before then be warned).

The next dish, I've done in the past, I just didn't have a name for it: Kålrotmos. Basically it's a mashed rutabaga (yellow turnip). Very simple dish to prepare, you boil it until it's soft much like a potato and you dress it with a bit of butter and sour cream. I opted for less butter and low fat sourcream. The rutabaga was a nice in between for the softer creamier cauliflower cream and the starchy carb laden mashed potato. They also hold well for cooking and don't tend to break down as quickly as a potato.

Ärtsoppa is a nice pea soup made from yellow lentils. It's very similar to a split pea soup except that the yellow lentil tends to hold up better under cooking. I used pre-sliced salted pork and cooked down some Vidalia onions. Then simmered the lentils in for an hour and a half. Normally a green split pea would turn to mush under this treatment. I was pleasantly surprised to have a perfect "al dente" (as described by one of my eaters) lentil that had some mush and some bite. Next time I'll go with whole chunks of salted pork so I can cube it for better texture. The thyme lent a nice almost "sweet" flavor to the final soup.

For dessert we have a Mandel Päron which is a baked pear with ground almonds. Normally it's topped with a whipped cream but I figured the cream would breakdown over night and the bartlett pears that I used had enough sweetness to hold it's own. The lemon juice I used to keep the pears from browning added a nice little tang.


Whew another one down. Next bento will be a big one. It's Number 100! I can't believe it 100 bentos. I've got a few ideas of what I want to do. Check back here and see what I come up with. As always thanks for reading. Smaklig måltid!