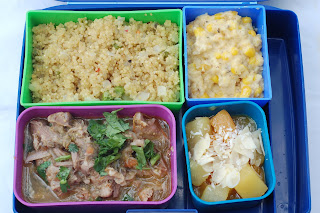 I know, I just did a SloMo theme not too long ago. I like the fire and forget nature of the slow cooker and I had plenty of dishes I wanted to try out from last time that I really had to come back and re-visit using my multiple crockpots. There's a good reason why a lot of busy parents rely on the crockpot to serve dinner. I mean who hates putting in a bunch of stuff and setting it cooking right when you leave for work and have it all ready for you by the time you come home. (well that's the dream anyway) I find practically speaking if you factor in transit time even six to nine hour cook times you will find yourself rushing home to turn it off. (perhaps it will hold that extra hour or two, sounds like a future experiment) Anyhow it's still got the no fuss, no muss factor working in it's favor, and newer models let you set on and off times. If you pair all that with my sous vide rigs you could probably setup for a large dinner party and just worry about plating when you come home. I might have to give that a shot to see if it's really that easy. Anyhow on with the show.

For the main entree we have a Tomatillo Braised Pork, as with everything in the crockpot you just dump in all the goodies and wait for it to finish, there is an oven version of this recipe. I personally like a bit of browning with my pork so I finished this uncovered for 15 min in the oven. The acid in the tomatillo salsa did a nice job of breaking down the pork, just trying to pull these out with tongs caused them to break apart. I used a fat separator on the resulting liquid to save my eaters from some of the fat in the cooking liquid. I think five pounds of pork was more than enough to prepare at least 12 bentos (I only had eight to do) so I am happily munching on the leftovers this week.

It was suggested that the pork was served over rice or quinoa. I took a quick look at their recipe and decided to go with a modified version of my mushroom quinoa from a previous bento. As I've said before I love quinoa, it's got a neat texture and is a "super food" you can read all about it here. It's actually quite simple to make, I just fry up my aromatics, dump in some stock and bring it to a boil and drop in the quinoa and wait about 20 mins. I think the only thing I do different from the various recipes I've encountered was a 1:1 ratio of quinoa to liquid. I add more liquid after the initial cook time if it comes out a little dry. The end product reminds me of the texture of tobiko (almost a delicate pop when you chew on them, not hard little rocks). Most places I've encountered quinoa I personally feel like it's overcooked, the dish is usually "mushy". I'm probably the lone cook that has it all wrong, but I've yet to have someone complain about my quinoa so I must be doing something right.

Last time it was a toss up between creamy potatoes and scalloped corn. Obviously having done the potatoes previously I had to circle back for the corn. I have to say that I prefer the corn because it was a healthier recipe (no cheese, sour cream, and a lot less butter) and I think heavy starches going with some the pork would easily put my bentoers straight into an afternoon nap. I really enjoyed this dish. Tasting it right out of the crock it had a egg custard type of texture and the sweet corn was a perfect light flavored accompaniment. I ended cutting the butter by about a further half because it seemed a tad rich in my head, I'm glad I did because even with the version I have it seemed a little rich.

For dessert we have a Fruit Compote with Ginger. Basically it's pears, dried apricot and pineapple mixed with a bit of ginger and cooked for a long long time. I use a bit of sugar (brown and white) which I suspect drew out further moisture to 1) rehydrate the apricot 2) provide a nice "sauce". I garnished it with some sliced almond and coconut that I had in my freezer. Nice and simple.


I got great thumbs up for the food this week. I'll take the gold star :) Next week's bento will be another simple one, I have a lot going on this weekend but I should be able to manufacture something tasty. My hope is that my dying camera will take it's last shots and not give up on me. I've got a Nikon d50 so anyone with any advice to give on how best to upgrade and retain all my extra batteries and lenses please help me out with some suggestions! (It's having shutter issues and I don't want to pay the bucks to send it in) I'm considering moving to the four thirds format but I it seems wasteful since I only use my "big camera" for this, food events, and big vacations. Anyone have an opinion for me?