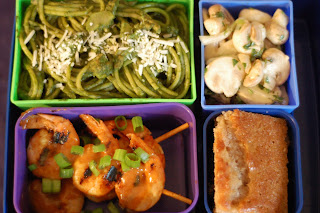 We have a bit of a Frankenstein theme this week. I still couldn't let Peru go, there were just so many more things I wanted to try. I was ready to go ahead and put together another Peru bento when Lindsay from Apron Adventures was kind enough to drop off a grapefruit and grapefruit accessories basket from the folks at Texas Sweet. This of course got me thinking grapefruit theme, but I really wanted to stick with using the grapefruit on a subtler level rather than the more obvious fruit salad or fish with grapefruit slices and I still wanted to do a bit of peruvian cuisine. I found two recipes from each theme and I think they all pair nicely together, so I present to you grapefruitperu, citroperu, perufruit ok it's a confused theme we'll just have to roll with it.

So our main entree is a grilled shrimp marinated in grapefruit bbq sauce. Dead simple to make, I ended up tweaking the sauce recipe because it came out a bit thin and I had hoped for a better coating, I also opted for a combo of both dijon and regular yellow mustard. The bbq sauce in general was quite pleasant and had a nice citrus twang to it. The original recipe called for rice, but since I have a starch component already, I went ahead and just served them on the skewer. I will say the suggestion to serve them as a po-boy would have been perfect, the sauce isn't so sweet or overwhelming that you could just stuff the shrimp in a bun and add a bit of bbq sauce for moisture and you'd be good to go.

Back to Peru with Tallarines En Salsa De Espinacas or Pasta with Spinach walnut pesto. The ground walnuts lent a very creamy texture to the dish. I think the recipe suffered from either translation errors or simply badly written instructions. I muddled thru it and figured out what needed to happen. Basically you make a spinach walnut pesto, fry up some onions, and pork and mix everything together and toss it with the spaghetti. The color was very dramatic and bold which is something I liked, I think in retrospect I would have gone further to thin out the pesto as it's a bit thicker than I would have liked.

This recipe was requested, you can find it here.

Here you see Cebiche De Champinones, or Mushroom prepared Ceviche style. I was a bit skeptical on the idea of raw mushrooms marinated in lime would still chemically cook like fish or meat. Sure enough after a day worth or marinating the mushrooms did cook. I think I should have gone with the mellower red onion for the additional color. Serrano peppers round out the ingredients to give the dish some heat. I think the dish is still missing something. I'll have to think on it some more and experiment with some tweaks. I think in the end I prefer the lightly cooked marinated mushrooms from my quickfire bento. The mushrooms might still be a little to raw for my tastes. I'll have to ask my diners to see what they thought.

Finally dessert, back to the grapefruit theme, Grapefruit spice cake. I use grapefruit juice in the cake and the glaze, I think I could probably have gone with a bit more as it seemed like the cinnamon and nutmeg overpowered any sense of grapefruit in the cake. Still pretty tasty, I brought the extra loaf to work and it was gobbled up pretty quickly.


Ok there we have it citroperu, citrusperu, whatever, it's a bit of a stretch when you think about it for a consistent theme, but if the Grapefruit fairy brings you grapefruit then you make a bento out of it. Thanks again to Lindsay for the grapefruits.

Unknown said…
I have to disagree with you on the texture of the pesto, walnut sauce. It was just right- and the dish was delic, too.
March 4, 2010 at 3:53 PM

Preparation:
Bring water for the pasta to a simmer.

In a blender blend walnuts and while the blender is on add spinach and reserved liquid and a couple of tablespoons of parmesan cheese. If the sauce is not thin enough add some of the simmering pasta water.

Cook Pasta according to instruction

Mean while, heat 2 tbsp of vegetable oil and fry the onions until soft and add the pork cooking until ground pork is cooked through. Season with salt and pepper.

Add the spinach mixture and heat through. Add more pasta water as necessary to keep the sauce from becoming too thick.

As soon as the pasta is done, drain and add to the sauce and toss thoroughly. Sprinkle on Parmesan to finish.
March 5, 2010 at 4:28 PM

The Magic Kingdom said…
This comment has been removed by a blog administrator.
January 2, 2021 at 2:25 PM