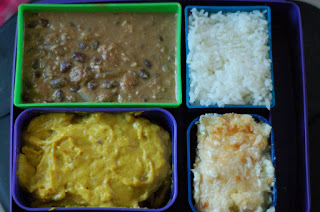 I'm not sure what possessed me to pick Peruvian food as the theme for the box. The country just popped into my head and I just started digging. I learned a lot about the cuisine and apparently it's a melting pot claiming connections to Japan, China, Africa, French, and Italian immigrants to name a few. This mix became very apparent while reading through collection after collection of recipes and websites. It was a fun exercise getting a week's worth of immersion looking into the country and it's cuisine. I've no doubt barely scratched the surface and am so intrigued by what I found, I'll no doubt have a return to Peru bento somewhere in the future. I tried my best to pick and imagine the combination of flavors and textures that seemed on paper would come out as favorites (there were lots to pick from) and that's what I present today. My only regret was that I had to sacrifice a slot (and a whole dish) to rice, which was unavoidable after tasting my main dish.

For the main dish we have Aji De Gallina, it's a poached and shredded chicken cooked in a chilli pepper sauce. The sauce is actually thickened bread and pretty rich tasting. From reading the description, I had expected a more stew-like consistency, it's more of a very thick curry. It was very delicious and I think I could have used more chili but refrained because I was afraid scaring off some of my eaters. In the end the sauce really needed rice so I sacrificed the slot for the Tallarin Saltado and just kept that for myself. (oh darn) The addition of the kalamata olives gives a good salty kick to the almost sweet creamy sauce. I think for next time, less bread so the sauce is a bit thinner but all in all we have a winner here.

The dish not pictured that got pulled was called Tallarin Saltado, it's got roots in street food, and I found it curious since it features spaghetti noodles and beef, tomato and onion stir fry seasoned with Soy Sauce! Talk about cultures combining.

I won't lie this next dish probably isn't the most healthy thing I could have put in we have here Frijoles Negro En Salsa De Nueces. It's black beans cooked in bacon (home cured of course), ham, roasted onions, and ground walnuts. The flavors were delicious, the beans were suppose to be pureed but I like the texture difference by leaving them whole and not mushy. The use of ground walnuts is pretty curious to me as my only other encounter of using ground walnuts is in Persian cooking. Perhaps another culinary visitor from around the world? I'll have to do some more research to find out.

To your right you see Pastel De Coliflor, which is basically a cauliflower gratin. I had to rely on experience a bit here, the instructions said to plop in one egg at a time into the milk/roux mixture. That screamed of scrambled eggs, so instead I went with beating all of the eggs and slowly tempering the eggs by adding the milk mixture a bit at a time. This gave the Pastel a custard like consistency and seemed to work well. The dish borrows from italy with a bit of Parmesan on the top to brown it up top.

No dessert today, but I did go after a soup: Sopa De Quinua (Quinoa soup). As I've said in the past, I love quinoa, it's a very versatile grain and it's really good for you. Since quinoa comes from South American, I really *had* to find a place for it. The soup is interesting, one of the characteristics of quinoa that I like is the almost caviar like texture. In this form the quinoa is far more mushy with only hints of texture, making this more like a rice porridge consistency, kinda creamy. Great flavors in the soup, the cumin was a nice touch to the vegetables. I did manage to forget the egg which is one of the things that drew me to this recipe. To finish, I was to stir in a stream of eggs, which is no doubt a nod to Egg drop soup in origin.

I'm not sure how spot on I got all of the dishes, it's difficult to cook blind never having tasted the food before. What made it even more difficult was that most of the recipes and their multiple versions were poorly written out. Keeping in mind that the cuisine was developed by many different cultural influences, I actually used my knowledge of french, italian and chinese cooking styles in the various dishes. This proved to be quite fun and a nice exercise in using the things I've learned over the years.
beans cauliflower chicken peru soup south america

audranoodles said…
Oh, but it was my favorite bento yet!
The coliflor was divine. I was sure it was my very favorite new thing in the world... for about 10 seconds until I tried the Aji de Gallina, so warm and delicious in my belly. The perfect end to a winter day.

Ironjack said…
Glad you enjoyed it! I'm still hatching out plans for next week, course I'll need to think of ways to top your new favorite :)
February 25, 2010 at 9:43 AM