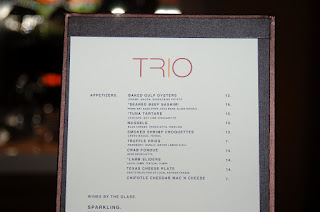 Trio at Four Seasons invited a bunch of us out to a blogger event. As always the event was a blast and I really enjoyed the food. It was a pleasant surprise, as my previous experiences at the Four Seasons Cafe was pretty common "hotel food", tonight's showcase really brought some down to earth food that was terrific without being pretentious. As usual with these post, lots of pictures and lots of words so buckle in for a long post.

Let's start with our hosts, Director of PR Kerri Holden, and Sommelier Mark Sayre. They wanted to get the word out on Trio as they had only recently kicked off their happy hour venue with half price wines and appetizers. I tried to get a good picture of Mark but he has an uncanny ability to blink on every picture. This was my best one. Seriously, I had some very tasty selections of wine from a yummy rioja to a surprising Coonwarra Cabernet. Mark was very conscious of picking wines from various regions that showcased something unique and special about that region.

Our other host is Chef Todd Duplechan. I spent a good amount of time speaking with Chef Todd, he's very down to earth and passionate about his food. His vision for Trio is delicious accessible food. Chef's inspiration come from his large family homecooking events on his mother's side and his father's interest in exploring the common food in various parts of the world (street food if you will). "The best tasting food is the common food." He takes very common menu items and adds just a bit of perk with a few simple additions. Many of the items he showcased seemed to try to take advantage of local ingredients (like the Texas cheese plate). I had a delightful time getting to know the creator of all of the fine food and he seemed genuinely interested in talking with all of us and sharing his inspirations. Since beef was overdone (as a genre in Texas) Chef really chose to show us in his words "a steakhouse like he'd want to go to"

Let's get on with the food shall we? Let's start with the Cheese plate. I took a picture of the cheese description, the goat cheese is at the top. My favorite was the Bosque Blue. It's a wonderful "light" blue, I'm usually a big fan of sheep's milk blue which tends to be sharp and salty, if you click thru to the larger picture of the cheese description you'll see how much a premium the restaurant places of local and non-factory type food. The cheeses were all delightful .

We move to something familiar with a twist. Here we have Truffle Fries and Chipotle Macaroni and Cheese. Again this is a showcase where Chef took normal comfort foods and added the slightest twist to make them truly special. The fries were YUMMY: truffle, fried potato, rosemary and the meyer lemon aioli mayo. I suppose in my limited experience with truffles, there *is* such a thing as over doing the truffle but certainly not the case here. The earthy taste with the fresh aroma of rosemary was delightful, and yes I love mayo and fries, guilty as charged. The Mac and Cheese was a fun dish, I didn't taste the chipotle but he used a variety of cheese and who doesn't like mac and cheese.

Let's move into the meat fare. We have some very delicious lamb sliders and seared beef sashimi. The lamb sliders were fabulous, tender and the pickled vegetables gave mini-burgers a wonderful taste. I'm not sure if the mint was in the meat or primarily in the tzaziki but was a welcome addition. I suspect the mint was dried so I didn't get a really big hint of mint from the slider, good non-the-less, but I think fresh mint would have helped. The Seared beef sashimi was good and the sauce was a great side. Most everyone I polled commented that were it just a bit hotter the fat would have played into the palate, cold fat doesn't help make it "melt in your mouth yummy" So this might have been a case of the serving and getting to the appetizer a little late.

Ok onto some seafood. The smoked shrimp croquettes were not a favorite with my peers. I happened to like them, maybe it's because I took a whole sampling with the fennel. I will say that the Crab fondue was excellent, I'm certain I could feel my arteries harden taking a bite out of the extremely rich dip, but we're here for food and I certain am willing to take one for the team. The Baked Gulf Oysters with shrimp bacon and shoestring potatoes had a little too much going on for me. It was a great appetizer, however I lost focus on what I was suppose to taste. I tasted oyster, crunch and it was over in a flash I lost the bacon. Maybe it was a case of too much going on for my simple palate. (boo I sound like a critic, it was yummy and I appreciate it!)

The seafood was wonderful but these two stood out for me. First we have the Mussels in blue cheese Proscuitto and Riesling. An amazing combo of flavors, I'm use to the hit of garlic but was surprised by the sharp blue cheese taste I got, very different than most mussles in white wine than I've had. This turned out to be a big favorite for the night. However, it happened to get beat out by the Tuna Tartar. Holy cow, if there's only one thing you get off this tasting menu it's the tartar, it simply melted in my mouth, the sauce was not overwhelming there was some other oil in the background that made this feel both rich and light at the same time. It was served with a sesame baked flatbread which turned out perfect. I got a great hit of the greens on top which gave the taste a nice spicy hit along with the rich creamy avocado. I would order three plates of this and call it dinner.

Finally my favorite, apparently for a special wine menu Chef raised a pig on pecans (a play on acorn raised pigs) and produced an amazing meal. Waste not want not, he took the rest of the pig and produced this amazing Garam Masala smoked Pork ribs in muscat Gastrique (heck I dont' even know if I spelled that right). Needless to say they were the best pork ribs I've had. Most of my fellow bloggers had a hard time with the level of heat on the ribs, but in my mind they were my favorite. Ask them if they have any "behind the counter" they might some left, if so, you're in for a treat.

Ok enough of my yammering. Go try trio, accessible food from a wonderful and considerate chef! Again, my thanks to Trio and their staff for a welcoming atmosphere that did indeed feel like a happy hour.

Folks I saw: Boots in the Oven, Poco-Cocoa, Maggie's Austin, Tasty Touring, Edible Austin, MisoHungrynow, and a host of others, but I can't remember their blog names.
bloggers event yammering