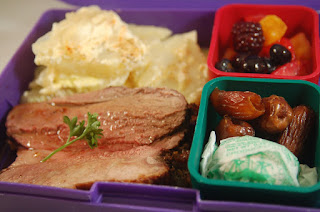 Sorry for the interruption of updates last week, a few things came up and I wasn't able to put together a bento. Fear not! The bento I had planned is here for this week, well almost. The original concept for this bento was Easter around the world. After I starting work on the box last night I realized I had bitten off way more than I could chew and had to scale back. Originally there were two additional items, it's just as well as it would have made the bento not gluten-free and less healthy. The only exception today is the Amaretti cookie I provide as part of dessert but the rest is GFF (gluten free friendly). Let's get started shall we?

The main course was a Greek-style leg of lamb. I've never worked with a whole leg of lamb before, this certainly was an experience. I think I could have done with some sort of sauce on the side, tzaziki, horseradish, or mint. The meat came out perfect, this happened to be one of the end pieces, but the center cuts were a perfect medium rare (yeah I had a slice) more important was that a reheat should result in a perfectly medium slice of lamb for my audience. The herb crust and crispy outside gave the lamb a perfect flavorful bite, but as you get to the center of the slice something to go with would have been nice.

First side: Hungarian Potato and Egg Casserole. The first blush recipes (since I didn't know what I was doing I consulted 8 variants) was a bit too unhealthy. I trimmed back on the butter and went with low fat sour cream. Also instead of a tall casserole dish I would opt for a "flatter" rectangular baking dish. It was too difficult to plate the casserole hence the jumbled mess you see in the picture. The dish itself was pretty good, I think I needed to intensify some of the spices especially since I cut corners on the fat. Also there were many ways to incorporate the sour cream, a direct application (like putting ricotta on a lasagna) would be the best way to go, you'll get a more even spread of sour cream.

Moving on, I needed something light after a heavy dose of meat and potatoes enter Fruit Salad with Gran Marnier Sauce. This one was very easy. Our local grocery stores have quart sized containers of mixed fruit. Add some zest (and fruit) from an orange, zest and a squeeze of lemon, and you can round it all out with a little bit of Gran Marnier. The Gran Marnier was there for that unusual flair that hits you with a bit of unexpected.

For dessert I re-used some of the components from the other recipes and threw in some dried dates and some Amaretti cookies.

As always, thanks for dropping by and if you want a recipe just hollar. Another blogger event coming tomorrow, look for the post!