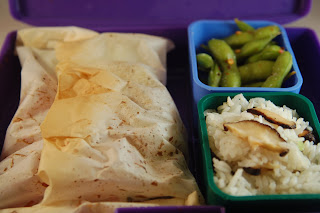 Martha Stewart invades my kitchen this week; news at 11, ok not for real. My wife saw one of those suggested meal cards in one of the Martha Stewart living magazine and thought it looked very "yummy". Being that it was gluten free, I was happy to give it a whirl. I got started on this bento kinda late last night but I was happily surprised the whole thing from prep to finish really took me about one and a half hours to churn out all six portions. Not too shabby I'd say. I had a few regrets on this one but from a general level it was the budget. I blew my budget by 2x, fish is expensive period.

On the positive I just want to say all of the dishes (excluding the fish) were brilliant in that they tasted wonderful and were just a breeze to put together excellent for any home cook that has to come home from a long day of work. Maybe I need to subscribe.

The leading entree in this series was a Fish En Papillote. I made a few mistakes which i'll detail out. I went with halibut since it's all the grocery store had yesterday, the mistake was it was previously frozen and thawed rapidly. Generally speaking the fish quality was pretty poor (mistake #1). The dish itself I'm sure was really wonderful on paper, the colors of the red onion, contrasting with the baby bok choi and the fish made this visually very appealing. I should have punched up the seasoning with some different spices, I was depending on the fact that all the the stuff would some how come magically together during the baking. I had tasted the onion mixture felt like it was missing something but I carried on anyway(mistake #2). The cooking time was 10-12, my gut said 8-10, I should have listened to my gut. It may have been the fish quality, but it just didn't live up to my standard of producing food. (mistake #3). I have to give myself a C on this one I think I could have done much better. Live and learn.

First side is the Jasmin Rice with Shitakes and scallions. I had a huge advantage in that I have a rice cooker and I swear, next to my Chinese cleaver, it is the most versatile thing in my kitchen. The topping was a simple saute of mushrooms and scallions. Put together it was kind of plain, the flavors didn't come together, it was rice with mushrooms on top. This one (unlike the fish) I could fix, I dumped the whole thing back into the skillet (no oil) and quickly did a pan fry. Something about heat and rice just changes the taste. I finished with a *little* bit of sesame oil to bring some additional fragrance. So, much better.

Nothing to write home about with the edamame, very simple very good for you. The chile salt sugar mixture came across pretty good. Not too spicy and something a little new to what you normally get at the restaurant.

This is a Vanilla Ginger asian pears, or asian pears with a vanilla ginger sauce. (just depends on how you want to serve it) This was amazing, so simple and different. Asian pears have a wonderful crunch to them, had this been a poached pears it would have destroyed the normal texture of the pear. Instead what they did was have you soak the pears in a Vanilla, ginger sugar water bath. The pears retain their crunch but suddenly instead of just pear, you have this wonderful subtle vanilla/ginger undertone. I put the syrup in with the pears because it was very light and it would give the pears that extra 4 more hours to soak. Big winner on this one and a keeper for future light desserts.

Overall, the I give the bento and preparation a B (for my failures with the fish) however the day is Martha's as I think for the simplicity had I not made mistakes on the entree, would have been as Martha does, perfect. Thanks for reading see you next time.

* Get a pot of water at a rolling boil.
* Take a bag of frozen edamame and empty the contents into the pot and bring back to a boil
* Boil for 5-7 mins
* Drain the water and dust with some salt (not too much)
* Serve (can be served cold or hot)

Packed with protein and niacin it's a wonderful good for you treat that is perfect for nibbling on.
February 17, 2009 at 9:25 AM