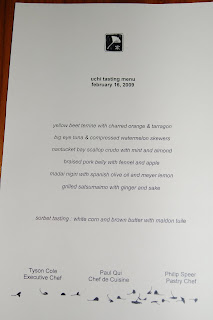 It's with a bit of mixed feelings that I submit this particular blog entry. I've worked pretty hard to keep any personal information off my posts. I've even gone out of my way to not really reference where in the world I am. With this post, I will officially place myself in Austin, TX. I can't really say why I didn't want to put any personal information out, paranoia? somehow mixing personal and business by providing linking data? In anycase, this blogger event pushed me over. The food experience was out of this world, and the chance to meet up with local bloggers was just a lot of fun. My friends and I love food, I'm the only one of us truly obsessed and geek out about food and so I felt amongst comrades at the gathering. Warning long post ahead!

So, some background. I get an email inviting me to a food bloggers event. I almost trashed the invite because 1) it looked like spam 2) who knows that I'm in austin? I've kept that info out. Fortuneatly I *did* take a closer look and it was an invitation to a tasting at my most favorite restaurant in Austin, and anywhere I've been thus far. As it turns out Addie Broyles (she's on the left) from the Austin American Statesmen, has been collecting local blogs and that's how they found me. Side note, Addie has been really wonderful in the local community connecting Austin bloggers and you'll be seeing a lot more local blogs in my following section.

Uchi? What is it? What's the food like? Who's the chef? Well all I can say is that there was a certain sushi restaurant in town that was my #1 spot in Austin. Executive Tyson Cole (pictured above) one of the owners of Uchi, studied under the master sushi chef of the former #1 and has managed to supplant said previous #1 as the new #1. Chef Cole has won numerous awards and accolades, heck he's even participated in Ironchef (interesting fact: he learned japanese by watching the old shows on VHS). The restaurant focuses on small bites of a wonderfulness and unique blend of old world sushi ingrediants with flavors from an amazing array of exotic and common ingrediants. Traditional fare is there and unbelievably good and the new flavors are amazing. Our invitation was to taste his favorites! For so many achievements and talent Chef Cole was amazingly humble and down to earth, sharing his stories of being on Ironchef and talking to us all one at a time and getting to know us.

I'll apologize for the photos, flash washes out a lot, I managed to get a few without flash (a little fuzzy but they look better so keep with the small view ).Ok, ok, the food you want to see and know about the food. Here we go. Be warned, I'm no sophisticated food critic, I'll try to do the dishes justice.

To start we have a yellow beet terrine with charred orange and tarrigon. The delicate flavors of citrus with a small bit of bitterness from the actual charred orange brings a great aroma to your palate and the yellow beet grants a nice texture. Personally the tarragon didn't come out as a flavor for me. The presentation was meticulous, amazing considering there was plate up on plate of 20 squares each!

Big eye tuna with compressed watermelon skewers. The tuna of course was amazingly fresh. the flavors on this dish were truely complex. You have the *slight* sweetness, the fish roe on top gave a saltiness and the bits of green onion added a savory (or as the japanese call it Umami) taste. It's kind of a weird combination that sounds contradictory, but the interplay was neat. The watermelon hits the palate first and as the rest comes together it's like appreciating wine where there were didn't "phases" of the taste. *and* that doesn't even cover the color. I mean look at that photo, beautiful shades of red offset by green. Again the labor involved must have been impossible. The small thing that I always look for in proper sushi chef. look at the surface of the tuna see anything on the flesh itself? *exactly* the perfect single stroke with consistent thickness, no mark that there was a second slice of the knife, that's skill and technique.

Ok next up: Nantucket bay scallop crudo with mint and almond. I had to do lookups on some of the terms crudo: is a raw fish dish dressed with olive oil, sea salt, and citrus juice such as lemon juice and sometimes vinegar. The scallop was perfect, I didn't taste the "citrus" which I imagine chemically cooks the raw fish. Now there were grapes, dunno if that's enough vitamin C, but food science aside, YUM. The mint was only a small hint which was only a highlight for the nice light textures in the dish. I didn't detect any almonds, but looking at the picture it was clearly there. Edit: ok after reviewing my pictures there appears to be "sea bean" in the mix, that would explain the very slight saltiness I tasted.

This dish is probably my favorite: Braised pork belly with fennel and apple. Braised pork belly! SO good. the presentation was of course pretty. It looked like a rack of ribs. Again sweet and salty, crusty taste from the braised pork ribs. Almost like an interpretation of bbq pork with colslaw because I swear there was some cabbage mixed in with that.

Madai nigiri with spanish Olive oil and meyer lemon. Again amazing knife skills. I can't tell you that I could tell the difference between italian olive oil and spanish, but the shisho leaf brings some of the hand roll/mint flavor. The fish was wonderfully light and delicate. The second bar of a good sushi chef for me is how well sushi rice is prepared. Everyone has their ratio of vinegar, sugar, mirin (optional) but having none of those over powe , along with the right consistency of rice (not mushy, not too undercooked) A+ well done. I'm no expert, but i've had a good share of sushi rice and these guys have it down.

This is grilled satsumaimo with ginger and sake. Satsumaimo is commonly referred to as a Japanese sweet potato. The only difference I could tell is that Satsumaimo seemed to be less sweet, maybe milder. The texture of the dish was more crisp (as in cooked but leaning towards raw-ish) rather than mealy or overly starchy soft mushy like standard potatoes, this is probably a cooking technique rather than potato, but I liked it not over cooked. Very good, the ginger and sake flavors gave it a great umph in flavor that wasn't over powering. I really expected a heavy ginger flavor when I read the description, but like the rest of the dishes the flavors played well and were subtle without one standing out too much. I'm betting the slight sweetness really help supress the spice of the ginger because it's pretty clear how much ginger was on the potatoes.

The Chef surprised us with a surprise addition to our tasting menu: their "shag roll" - tempura fried salmon with a squid ink sumiso sauce. I had to look this one up, sumiso is a vinegar miso sauce. I didn't think that the squid ink necessarily changed the taste of the sumiso, but the black was a stark beautiful difference on the plate compared to the roll. The whole thing was delicious, (I had two bites :) ) I'm a sucker for dynamite sauce (the pale orange sauce) but the whole thing was delicious I'm coming back for more of this.

To finish our tasting Chef Cole brought us white corn and brown butter sorbet with maldon tuile. I'm not a sweets or dessert guy I didn't think this would be anything for me, however as with everything, the finishing dish was amazing. It wasn't so much as a sweet as it was just a perfect semi-savory-semi-sweet-and-rich finish. I can't explain it. You simply have to go and taste for yourself.

We (the bloggers) joked that we were like the paparazzi of food. The moment a new set of bites came out flashes went off in all directions. I'm sure the actual patrons of the restaurant hated us. It was great, no one took themselves too seriously at some point we joked as we took pictures of Chef Cole "Tyson over here, Tyson over here". I'm pleased to have had a chance to attend this event. It was great to attend a food event that wasn't too pretentious with a bunch of fellows just as excited as I was to savor every little bite. And the experience to meet and chit-chat with an amazing Chef well, does this little blogger an undeserved great honor. Thank you for the invitation and my compliments to the Chef! I leave you with some misc pictures of the event

Christine said…
My mouth is watering just reading this post! What a great event and an honor to be invited. The next time I'm in Austin, we MUST go there!! By the way, when I saw the picture of Addie Broyles, I thought I recognized her as if I knew her...turns out I saw her in an episode of TLC's What Not to Wear! She's a local Austin celeb :)
February 19, 2009 at 11:23 AM