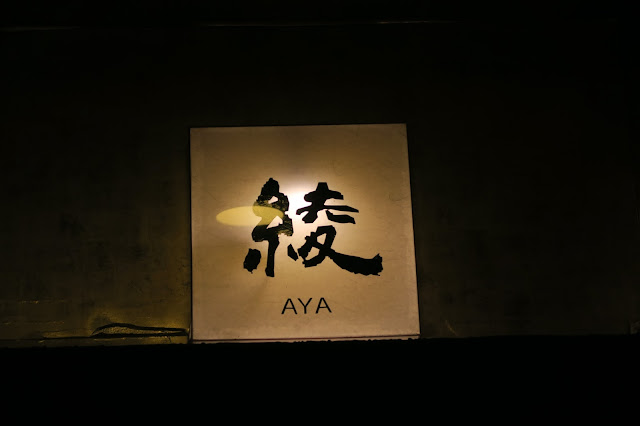 Finally getting around to posting our second fabulous meal in Tokyo. We met another friend for lunch near in the Ginza area. She suggested Aya and booked us a seat for an Omakase lunch.

We had a little trouble finding the rest 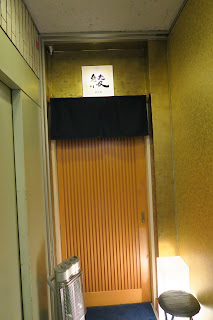 aurant, as you can see the front door is a little tucked into the building and just like the other place you probably wouldn’t have thought the door lead to a restaurant. 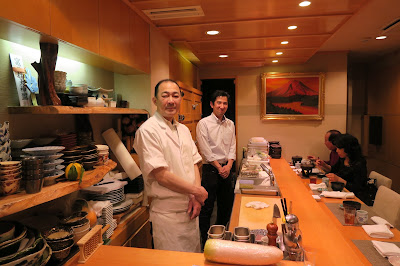 Inside the restaurant sat a total of eight people. The Chef worked in the center and as you can see there was a wall of beautiful dishes that he plated his creations, the space was very efficiently used. There were two waitstaff that assisted with bringing out things from the back as well as tending to your needs. I really like this style of eating, you feel very close to the restaurant and the people designing the wonderful food and ambiance that you are enjoying. Although the chef didn’t speak much english between ingredients and words I was familiar with (and gestures) I was able to understand most of his meaning even when our friend had to leave (lunch took a few hours and it was a working day).  Every course wait ate was a work of art and the dedication and these folks brought to their craft was amazing. 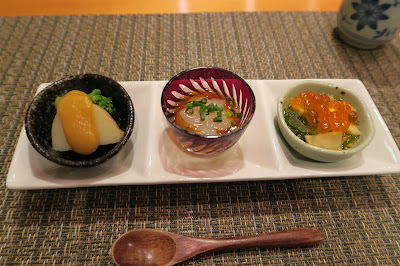 Opening course: steamed broccoli and potato with miso dressing, young white eel in a soy ponzu sauce, and salmon roe with seaweed and braised bamboo shoot.  The eel was similar to the white fish we ate for dinner, except not live this time. 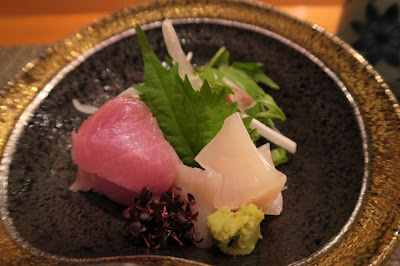 Sashimi course of tuna and scallops. it was served with a citrus soy dressing. 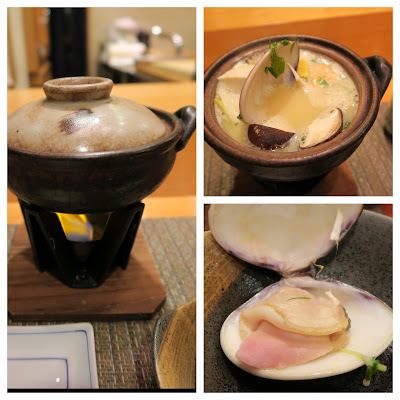 Next came a soup course, it was a flavorful broth with fresh shiitake tofu shrimp and a fresh clam. The serving vessel was brought out and unveiled the stand heated the soup vessel to boiling and the clam slowly opened up. The chef explained that this soup is also served as part of “Hinamatsuri” or girl’s day and the clam symbolized a wish for a finding your true love, as both halves of the clam shell can only match the original whole. 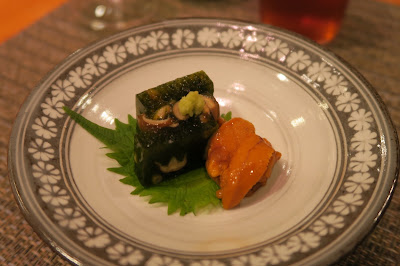 Sea urchin with mushroom and seaweed terrine. There wasn’t a lot of flavor to the terrine jelly, but there were some interesting textures going on, I think the jelly was achieved using agar agar, which makes sense with the whole seaweed theme. The sea urchin was (just like every sea urchin I ate in Japan) deliciously rich with a hit of brine. 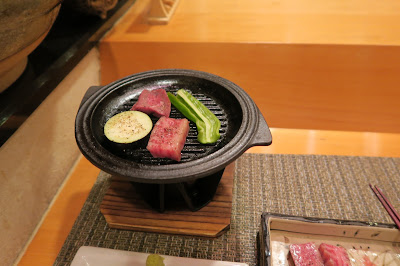 Self grilled selection of Wagyu and Kobe beef. The Kobe beef (show on the bottom of the grill) was extremely marbled, I’ve never seen anything like it and the flavor was rich, meaty, I know it looks like you’d be eating a solid piece of fat but it was nothing of the sort. 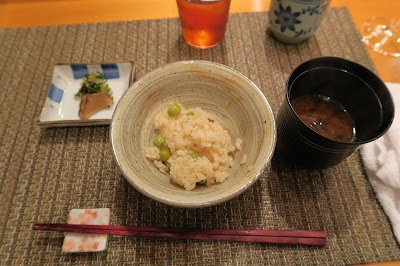 Next came a rice course called Takikomi gohan I had the chef spell it out for me so i could try to make it myself, he said it was pretty simple dish. He explained that rice was cooked in a earthenware bowl and the cooking liquid was a dashi and a bit of soy sauce. The brown pickle to the side was a daikon radish that had been buried in Sake Kasu (the left over rice when they make sake) for three years. 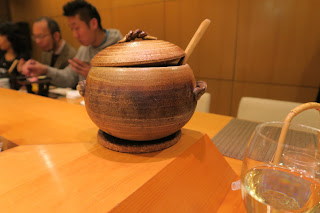 This was the earthenware pot that the rice was cooked in and it was full of rice.We were getting full at this point and gratefully took the extra rice home (which made for a delicious morning breakfast with some miso soup). 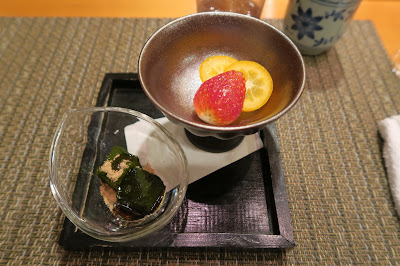 To finish things off we had a bit of Matcha Warabi mocha in a syrup with fresh strawberry and what looked like a large kumquat. The fruit was larger and sweeter than a kumquat. 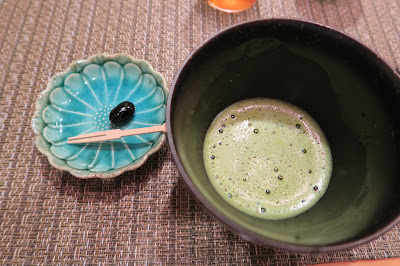 Finally we end with some Matcha and a single sweet bean, literally a bitter/sweet end to our meal. We enjoyed it so much we hated to leave but after three hours we were quite full! As I said, this was one of our most memorable meals in Japan. I can’t imagine that folks can normally spend three hours on lunch here, but the experience was phenomenal.

Man I miss Japan, I want to go back as soon as possible!