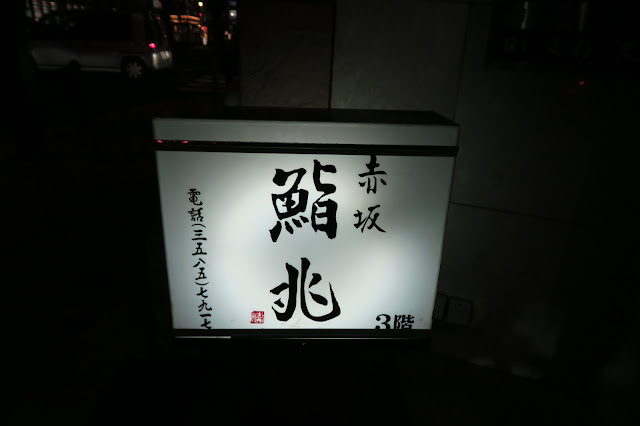 Best meal I had while in Tokyo? Well there were two and this is one of them. Our friend that took us on a mini tour of Tokyo over the weekend took us to his favorite lunch place for dinner. During lunch they serve a bustling crowd with Kaisen Don (a Sashimi rice bowl). He had never been here for dinner and reserved us a space for an Omakase dinner, the chef's selection, the literal translation is "I'll leave it up to you". I couldn't for the life of me tell you the name or where this restaurant is, the only thing I have is the above picture of the sign outside the building. 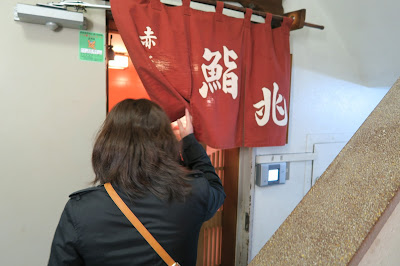 The restaurant is very nondescript, it was on the third floor right around a stairwell and had I been walking around I would have missed it. It's really close to the Parliament building so the part of town is nearly deserted during the evening. 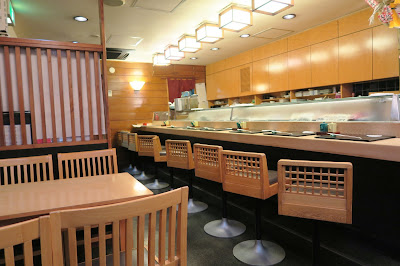 Here's the photo of the restaurant, it's shot from our table of four and there's a four seat behind the screen. 20 seats. The place was tiny. I'm not sure that they normally open for dinner, we were the only customers for the evening and it appeared that they were doing the books.Dinner was a total of a eight course . 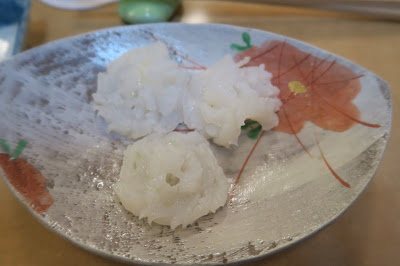 Our first course was a scored squid quickly blanched to create a flower effect, simply beautiful. The squid was blanched in a salt water to give it flavor. The texture was very soft without any trace of rubbery over cook-ness. 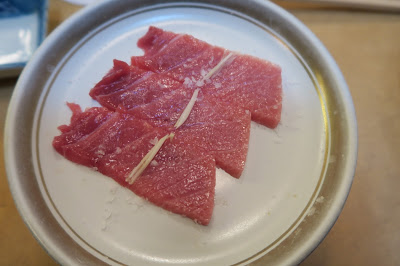 Next was a chu-toro with sea salt and a sliver of raw garlic. I've never had sashimi this way. No soy sauce needed since it was already salted. As you can see the tuna was a beautiful red color and the tell tale white stripes indicating a medium fatty belly cut. The Chu-toro was melt in your mouth and the garlic gave it meaty "flavor". I guess I usually associate garlic with beef. If I had closed my eyes I would have believed I was eating some sort of well marbled beef. My mouth is watering as I write this.


There was a flurry of conversation with the Chef and our friend. Our friend translated asking if we eat "alive fish". I wasn't exactly sure what to make of this, I was envisioning Gollum with a fresh catch "raw and wriggling". My intrepid wife responded without hesitation "of course!" I really only draw the line at insects and even then I'd try anything at least once. Upon seeing the dish, I now understand the fish tank on top of the sushi counter, it was not for decoration. This is the first video I've ever actually posted so I hope this works. I'll admit I was a little intimidated at first. Do you swallow them whole? Give them a chew? Envisioning sci-fi horror movies, I opted for the latter to be safe. The white fish were dressed, in a soy ponzu sauce. The chef came by to explain that the fish were just now in season to be eaten this way. This one is a hard one to explain, the fish itself didn't impart much flavor so mainly soy ponzu with a hint of fish, the texture was like eating konyaku noodles (a low calorie noodle made from yam) slippery with bursting texture like salmon eggs. It was actually quite delicious and unique. 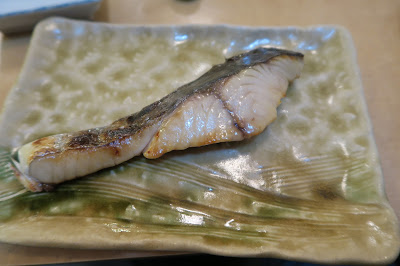 Grilled mackerel, the fish was first marinated and then quickly grilled. The skin was edible and fattiness of the fish came out with the grilling. 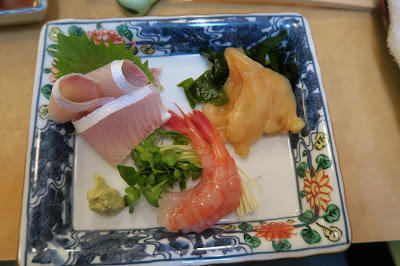 Sashimi course featuring yellow tail, surf clam and sweet shrimp. Most of the time surf claim is served cooked in sushi bars in the US it features a red tip and the wider part is white. Also shrimp tends to be cooked as well, so it's been a neat experience eating the shrimp raw. Both were a very different textural experience. The spicy radish greens went well with the naturally sweet shrimp. The Chef's wife poured some dark soy for us to eat with the sashimi. 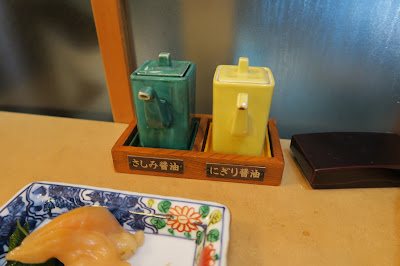 Which leads us to the soy sauce. There were two containers of soy sauce one for light soy sauce and one for the dark. Both soy sauces were brewed by the chef here in his restaurant. There was a hint of sweetness to both of the soy sauces and something missing in the after taste that I normally associate with soy sauce. It was explained to us that the thicker dark soy sauce was for sashimi and the light for sushi. 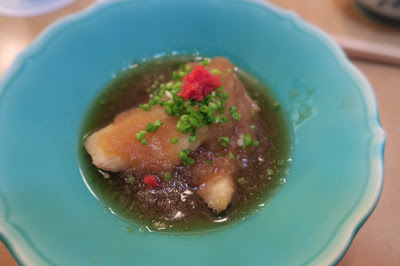 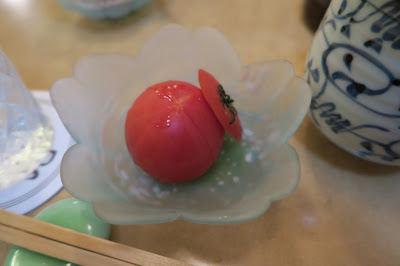 A quick palate cleanser. Tomato, just under the size of a golf ball. I could get the variety of tomato, it was very sweet and more fruity and no tartness. 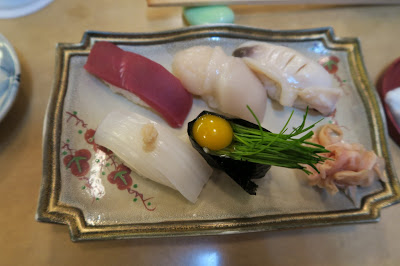 The final course was sushi. From the top left. Tuna, scallop, another type of clam, squid and a gunkan of qual egg and chives. This was served with the light soy sauce.


Oishii! This was a perfect amount of food, our friend asked if we needed more food and we both declined, we both felt perfectly content, not uncomfortably full and not hungry. The meal lasted two and a half hours and we enjoyed every morsel of food and every minute of conversation. The chef and his wife were such wonderful hosts and a great thanks to our friend to show us this gem that we would never have had an opportunity to try otherwise.

Still need to post Kyoto and our second epic meal.

Kathy said…
It’s a great resource when traveling. Thanks for sharing!
Rochester Sushi