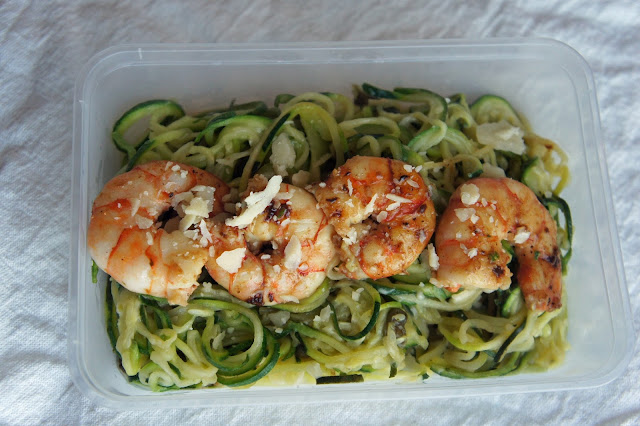 It’s been a busy season, holidays are a little different in Australia. Since they don’t have Thanksgiving  their holiday season starts near Christmas and stretches thru to Australia Day on the 26th of January. I have been cooking but just no time to post anything so I’ve got a huge backlog of posts to put up. Ah, so many bento boxes to choose from which one to post?

I found inspiration in a shrimp with red pepper garlic pasta dish, no sauce just tossing in fresh ingredients infusing the oil along the way. I substituted zucchini noodles for pasta to save on the carbs and get more veggies into diet and since my wife isn't big pepper I decided on capers and lemon. 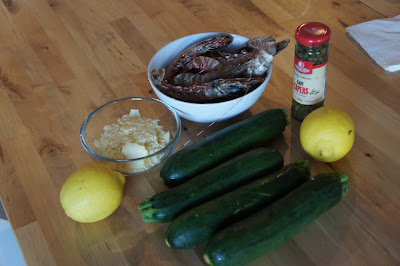 Five ingredient and a one skillet meal you can’t ask for a simpler recipe. 500 grams (about one pound) of Tiger prawn (they call shrimp prawns here) which I shelled and cleaned (you could use the shells for a stock). Four Zucchinis, a couple of tablespoons of capers, 1/2 cup of parmesan cheese, and a couple of lemons (taste as you go on that one since lemons differ in size, I ended up only using one). 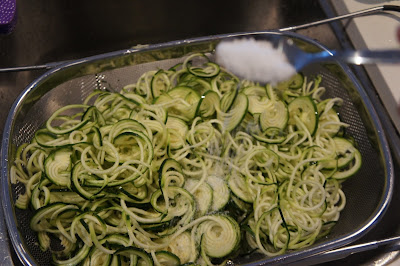 First step after spiraling the zucchini is to salt them and let them sit in the sink for about 30 mins as I cleaned the shrimp. 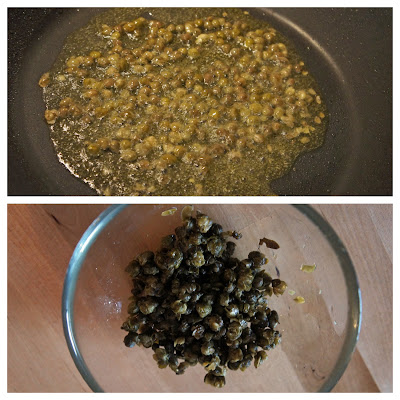 Over medium heat fry the capers in the olive oil until they pop open and using a slotted spoon (or some other way to fish out the capers and leave the oil in the skillet) remove the capers and set aside. 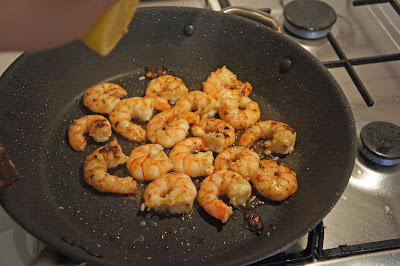 In the same oil sauté the shrimp until they are cooked. They don’t take very long a few mins at most. As you finish the shrimp squeeze half a lemon over them and give them another good toss in the skillet. Take the shrimp out and set them aside (do not clean out the skillet) 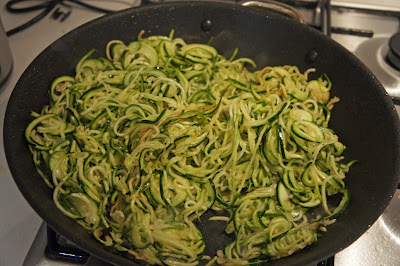 Rinse out your zoodles and shake them dry. (the paper towel thing gets too tedious) Briefly pan fry them until they are cooked. This won’t take very long you’re basically heating them through. The salt will have taken away the raw taste/texture. 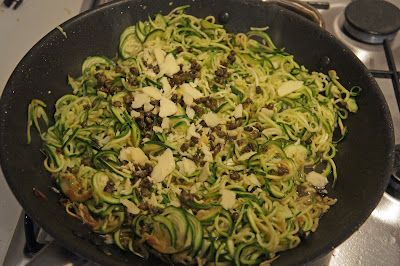 Just before you’re done  add in your parmesan and fried capers and toss them around and squeeze in the other half of your lemon. 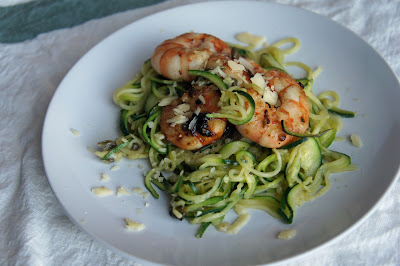 Plate it up and top with your shrimp, Done!

Over medium heat heat olive oil. Toss in capers and fry until they pop open. using a slotted spoon remove capers and set aside.

In the same skillet sauté shrimp for three mins or until cooked through. Squeeze half a lemon and toss in skillet making sure to coat the shrimp in oil and lemon juice take out shrimp and set aside.

Rinse and drain salted zucchini. Then saute in skillet until heated through. Add capers, parmesan and squeeze the other half of the lemon over the zoodles. Plate and top with shrimp.
capers parmesan shrimp zoodles zucchini