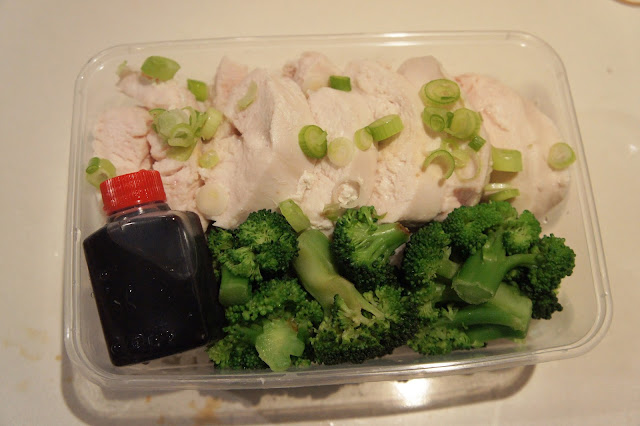 I've been working on easy to cook lunches that I can put together during the week. Usually my bentos are made during the weekend when I have a bit more time to shop, prep and cook. I like this particular bento because a lot of the work is set and forget and doesn't require a lot of active prep time which gives me more time to unwind after work. I've made Hainanese chicken in the past (wow it's been 5 years) it's basically a poached chicken. I say "basically" but that description doesn't do the humble dish justice, it's got a lot of flavor and a great simple protein meal. Certainly, such a dish can easily be done sous vide couldn't it? After a bit of searching there were lots of different variations so apparently I wasn't the first to come up with the idea. Oh well. 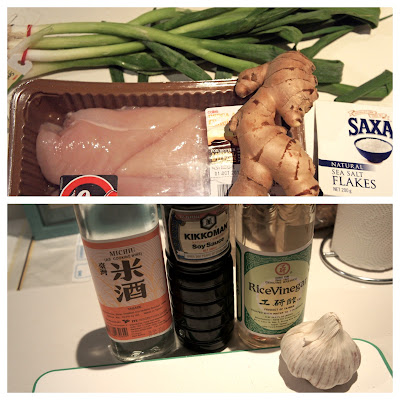 As I said the ingredients are simple. The top for the poaching packets: Green onion, ginger, salt and chicken breast. The bottom picture is the sauce: rice wine, soy sauce, rice wine vinegar and some garlic. Yup that's it. Hainanese chicken is usually skin on and whole bone in chicken mainly because it produces a flavorful oily poaching liquid. Since I was holding at temp for a while, I figured we could go with skinless as we'll be adding more flavor from a longer poaching time on the chicken and aromatics. It's also worth noting for the sauce the longer it sits the more garlic flavor you'll get. It's fine if you're cooking this for dinner but if you can let it sit for overnight it'll be even better. I've still got a batch in the fridge, since it's vinegar, salt, alcohol (three things all bacteria hate) I felt pretty safe in storing it longer term. 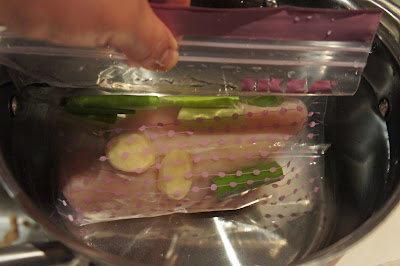 I sliced up the ginger into thin rounds (maximize that surface area) and the green onions into 1.5 inch segments and dropped them in with the chicken breast (which I salted ) and added 1 cup of liquid to the pouch and used the "water displacement" method for sealing the bag. The water in the bag is important because you're going to be using this for your rice. 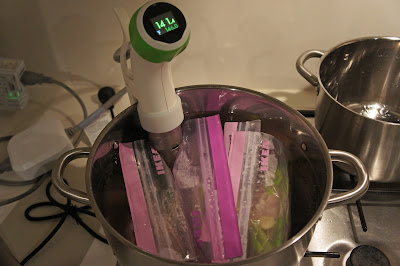 I set the nomiku to 146 and when I had the water I temperature I dropped in the bags and let it go for about 1.5 hours. Minimum you want an hour but you can go as far as four hours if you've got things to do. 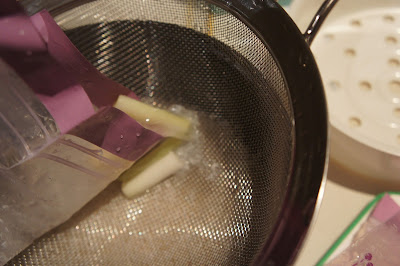 Once done, I strained out the liquids from the bag directly into my rice cooking pot, until I had enough liquid to cook the rice. In this recipe I did four chicken breast which worked out to be enough water to cook to the "four cup" level on my rice cooker pot. (kind of convenient). I hit the button on the magic rice cooker pot and let it do it's magic. 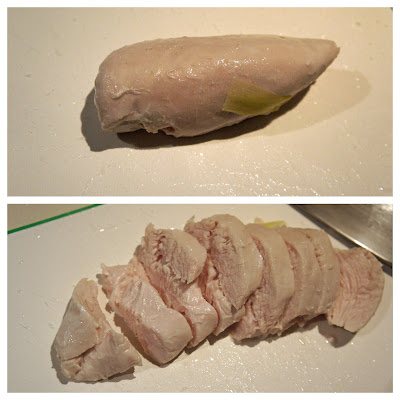 After I let the chicken rest, I sliced it up 3/4 inch thick. For the sauce I went with 1/4 cup of Soy sauce and vinegar and 2 tbsp of the rice wine and 2 cloves of garlic roughly chopped. 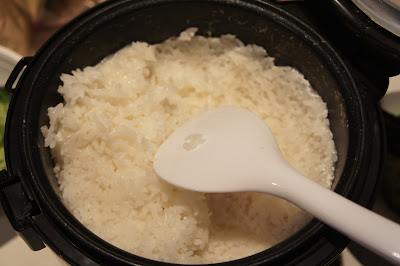 The rice came out very flavorful, maybe not quite as flavorful as cooking with a bunch of rendered chicken fat, but I think it's a reasonable trade off for a healthy version of this dish.  All told active cooking time might have taken me about an hour including washing up and boxing everything. (I microwaved steamed the broccoli) I even had time to watch an episode of Dr Who on the dvr, not too shabby.

Fill your sous vide device with water and set the temperature to 146F.

Slice green onions into 1.5 - 2 inch pieces including the greens. Peel and slice ginger into thin rounds. Divide both into 4 equal portions

Salt the chicken breast on both sides and place in sealable plastic bag with a portion of ginger and onion. Add one cup of water and seal the bag with "water displacement method".

When your water bath is at temperature drop in your chicken packets. Let cook for at least 1 hour up to 4 hours.

For the sauce: roughly chop garlic and combine in a bowl with soy sauce, rice wine vinegar and rice wine.  (this can be ahead to develop the flavor)

When Chicken is done, strain the liquid and reserve for cooking rice and let rest. Slice in to 3/4" medallions and serve with Sauce

For rice:
measure 4 cups (roughly 3 cups uncooked, depends on your rice cooker). Fill rice cooker pot with reserved liquid to instructed mark on rice cooker. If you don't have enough top it off with water. Cook according to instructions.

j8cobqjmyk said…
CNC machining has made it possible to create objects 100 instances quicker than quantity of} decades in the past. Given a rudimentary understanding of math and an understanding of how milling functions, studying very fundamental CNC programming is straightforward. While studying superior CNC programming would possibly take many years, studying intermediate programming abilities can be taught in a yr. A CNC machine can produce virtually anything that needs to be created from right amount|the right amount|the appropriate quantity} of any cake packaging material. Since its beginnings, it has been used to create precise prototypes in virtually each business find a way to|you probably can} think of, and it nonetheless does so today.
January 15, 2023 at 4:15 AM