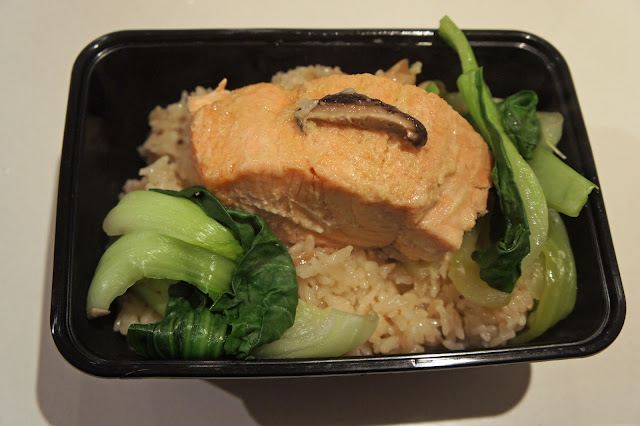 It's been a real struggle, I came to Sydney with two pieces of luggage and a backpack. The only kitchen device I brought was my Nomiku that burned out (but was replaced thanks to the generous Nomiku guys!) So it's been a struggle to choose what to buy and what to pass on. Only the essentials and multi-tasking is preferable 1) because of space and 2) because I'm not staying too long, so I can't afford to just replace everything I left behind.

One of the items I really struggled with was whether or not a rice cooker was necessary. I have a rice cooker back home and it was the first kitchen device I ever owned. My mom got it for me when I left for college and that little six cup rice cooker has been my "go to" for everything rice, steamed and then some. It's one of those simple on/off cookers, none of that fuzzy logic business. I used my mom's tried and true "back of hand" method to measure water (amazingly it always seems to work and her hands are more petite than mine) and I seriously considered bringing it with me. But I didn't. 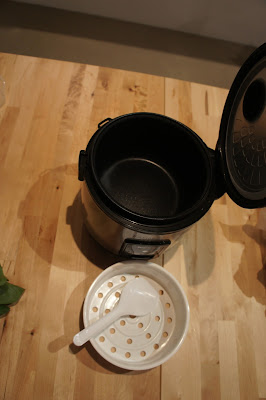 In the end I finally broke down and purchased an inexpensive one, (I had no idea how expensive a proper one costs). This one features a nice non stick insert bowl/ steamer tray and a simple on off switch. Of course I was in a hurry to test it out and so I decided to give it a spin as a one pot bento. 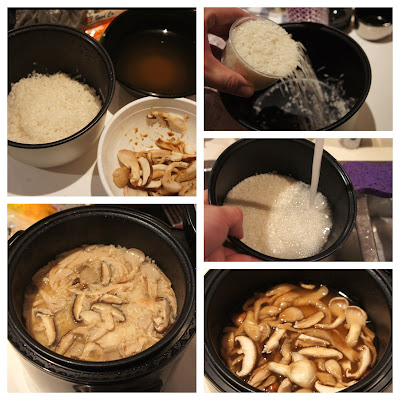 First the rice: I found an interesting looking recipe for a mushroom rice. It turns out my little cooker couldn't handle the full size recipe so I had to half it because otherwise the steamer insert wouldn't have fit. It's pretty easy, I used some dashi granules, chopped up the mushrooms, rinsed the rice and put it all in. I didn't believe liquid ratio (the recipe said that the mushrooms will provide enough of the liquid to finish the rice but I didn't believe it. Subsequent tries proves that the author knew what they were talking about, it came out a bit too soft this time (still delicious but I like a less mushy texture to my rice) 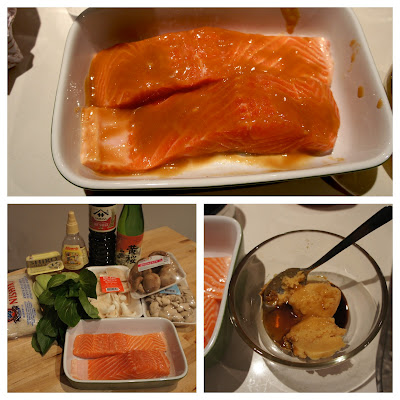 Next the fish. I went with a soy miso glaze: honey, soy, sake, white miso. This particular glaze I think was too thin for a steamed application, usually I broil/bake the fish. I also should have marinated longer. When steaming you don't get the nice caramelized glaze. I'll skip the recipe on this one you can see how simple it is. I'll post my brown sugar version in a subsequent post anyhow. 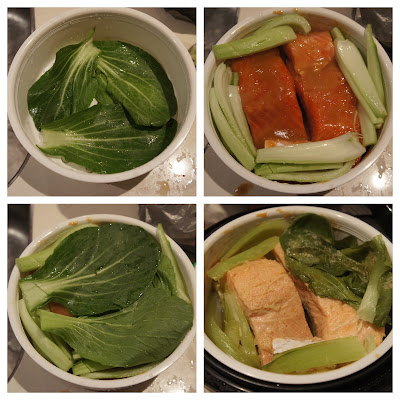 The idea was to put a bed of bok choy and let the salmon steam while the rice cooked with two servings of rice it should cook right about the same amount of time. Any rendering fat and marinade from the salmon would have just flavored the rice. This turned out to be a perfect dinner for two and it took me about 20 mins to put together. The bok choy went a bit yellow in the steamer (the final bento picture I had blanched the remaining bok choy in dashi broth so it's a lot more green). 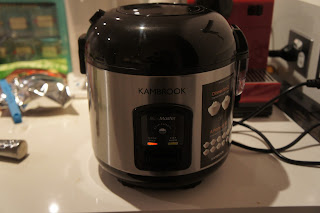 The rice cooker is a Kambrook, (I would have preferred a Tatung but those were $140) is going to take a bit of getting use to, it burns the rice on the bottom, you get what you pay for I guess, this one only cost $30 AUD so I shouldn't have expected a lot but as a test to put out a quick dinner it's definitely a winner.  I wouldn't call it a "rice master" but it's rice capable if you're willing to write off the bottom layer.

Boil water and add dashi granules. Let cool and set to the side
Toss the mushrooms in soy sauce
Wash the rice until water is clear and drain. Add Mushrooms, rice, dashi, and sake to rice cooker and turn on
The water level will not reach the marker on your rice cooker, the mushroom should make up for the remaining liquid (see my experience above)
Allow rice to "rest" for 10 mins after the rice cooker clicks off.

Julie Gomoll said…
I'm trying to think about what one kitchen device I'd buy if I were in your position. I think it would be either a slow cooker or a pressure cooker - they're the most versatile for the way I cook. I'm definitely going to try the mushroom rice in my rice cooker though!
September 21, 2015 at 5:08 PM

Ironjack said…
Hey Julie!
Yeah I agree it was between either a slow or fast(pressure) cooker :) I opted with slow since there was so much more I was able to do with it. (make pho broth, party food warmer). I never did use a pressure cooker much but I did buy one as I had intended on getting into canning and such, but with the limited space there's no way I am going to do that here. (that and I still have a fear of poisoning myself with canning food)

Lemme know how the rice turns out. I wish i had my tried and true rice cooker here to compare the results. As a side dish (rather than having stuff over the rice) you may want more soy sauce or salt.
September 21, 2015 at 6:39 PM