Joel Robuchon my first experience with a 3 Michelin Star restaurant 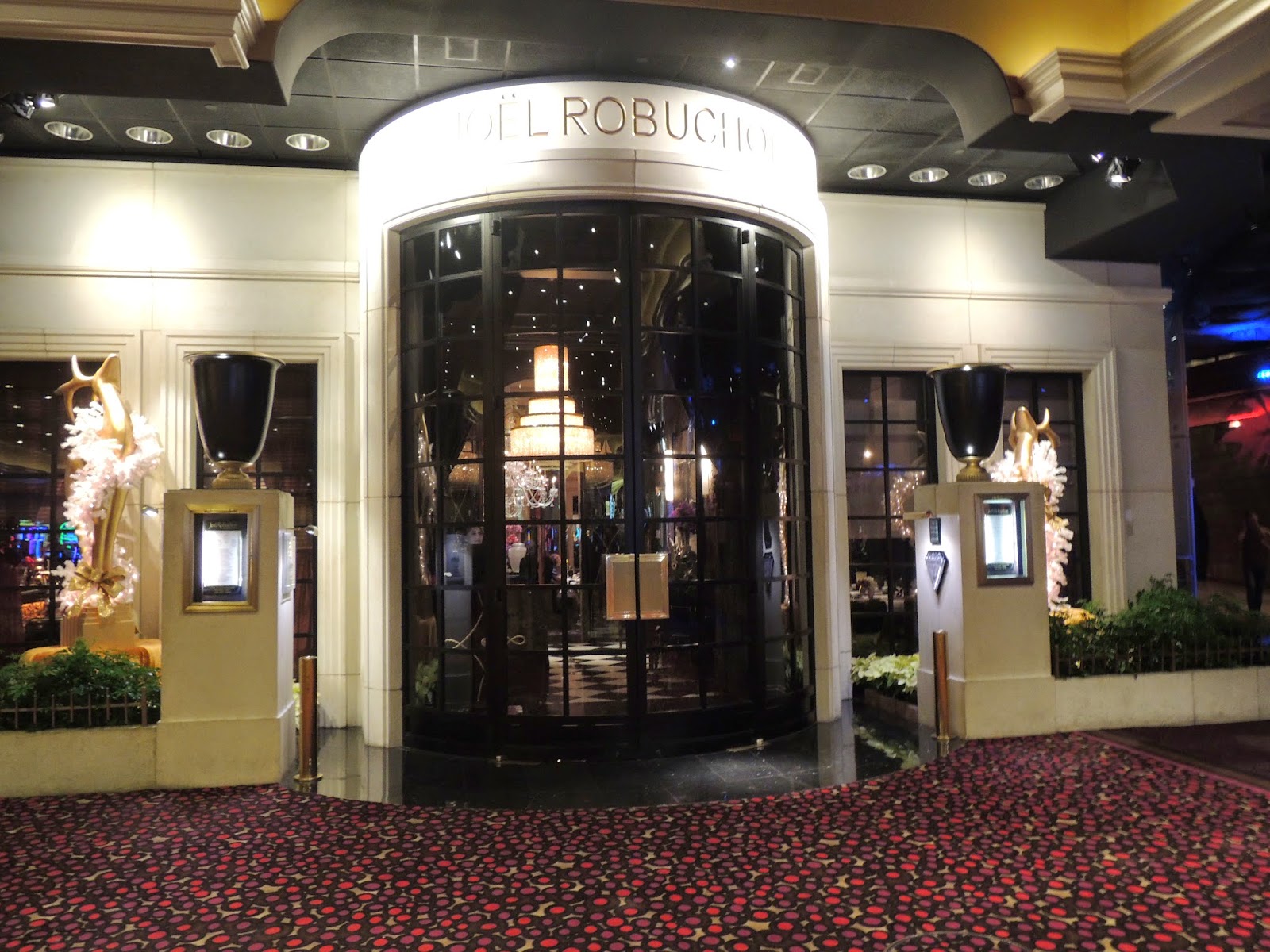 One of the many things on my foodie bucket list was to dine at a 3 Michelin star restaurant. I had my chance a few years ago on our trip to Las Vegas but at time we only had only stumbled upon Robuchon and there was only a day left and there were no places on the reservation list. After recounting our trip to my friend, he asked "OMG did you go to Joel Robuchon? I had the brioche from the bread cart and nearly cried". Since then I had been plotted my return to Las Vegas just to try this restaurant.

I had no idea what to expect out of my experience at a three star Michelin star restaurant. I only knew that the food would be top notch and I was told that the service was a completely different level of experience. We had an idea when my wife asked the maître d' "can I...." his reply before she finished was "Yes of course! we never say no!". 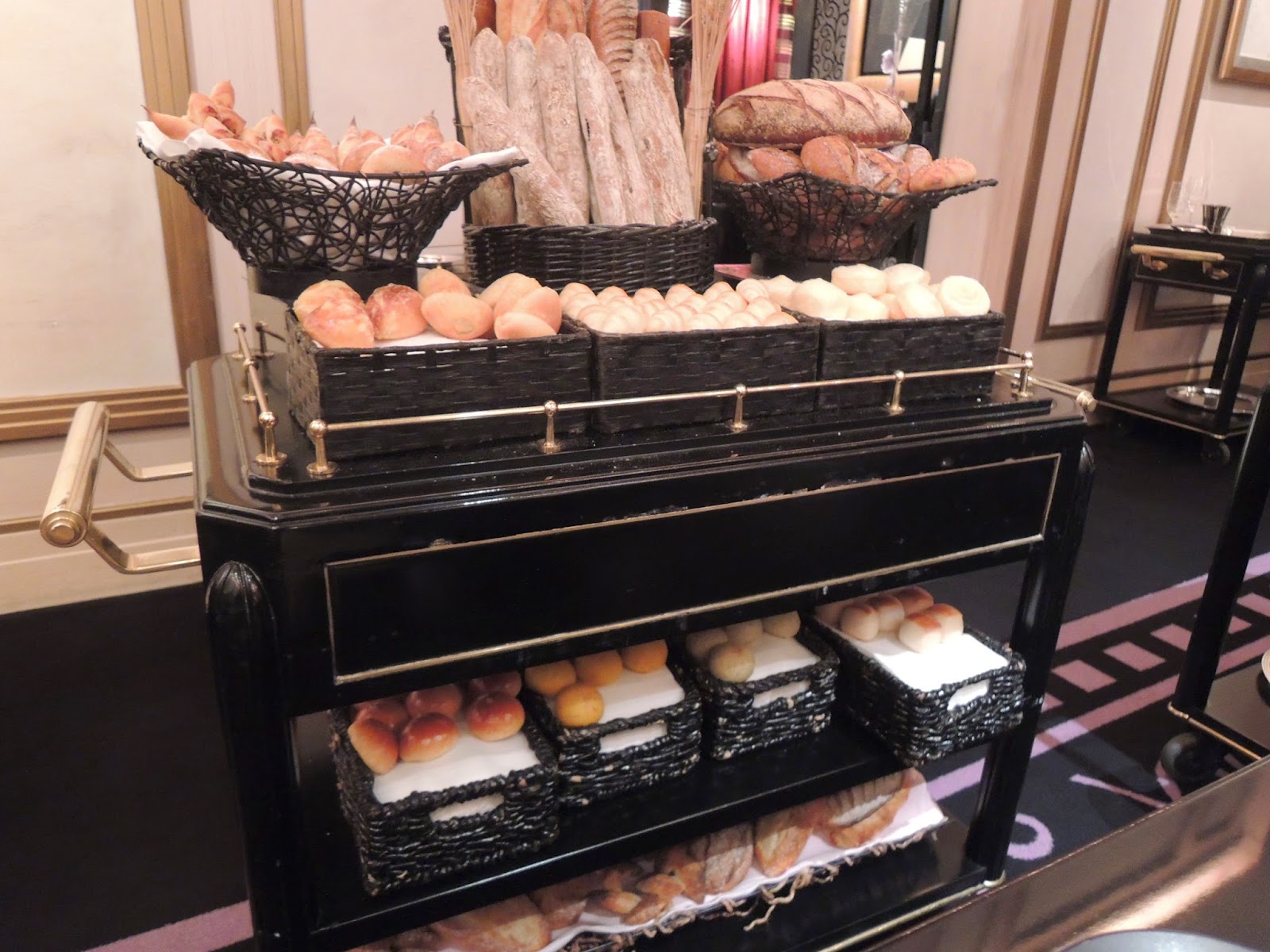 The bread cart was quite a site. Usually you get a bread basket, if you're lucky it contained a couple of selections of bread. A whole cart was presented to us with breads of all sorts. It was preceded with a cart with what I can only describe as a "tower of butter" which the was artfully carved with a spoon and presented with fleur de sel and a small bowl of very delicious extra virgin olive oil. The cart contained every bread I could think of. 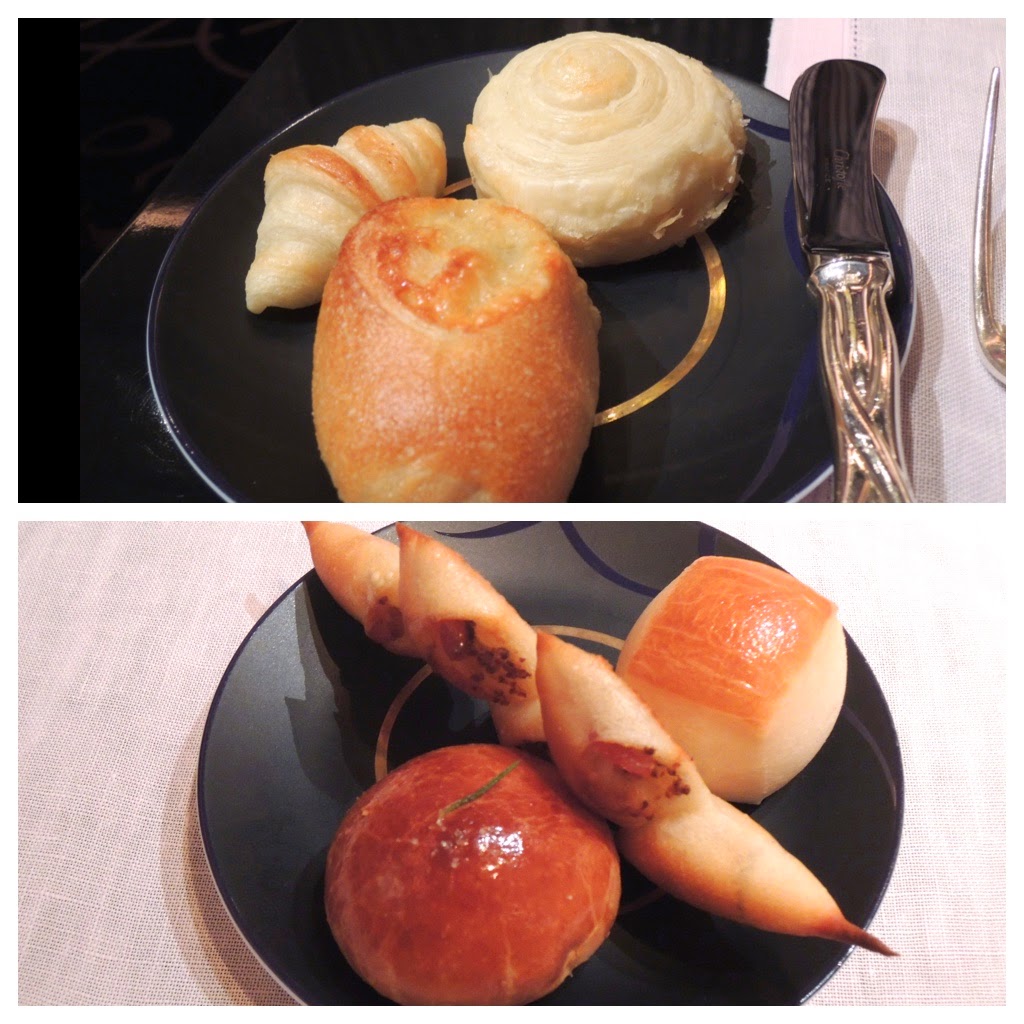 It was hard to choose even though there seemed no real limit. I picked a classic brioche, mini bacon pain d'epi, and the square "milk bread". We also sampled croissant, cheese brioche, cheese pastry bread. Each piece was delicious and had their own characteristics. The brioche had a chewy crust and a soft pillowy inside the croissant was every bit as good as the full sized versions I had in Paris. Wow, what a start to dinner. They toasted our first selections and never hesitated to offer more when we glanced over at the cart. 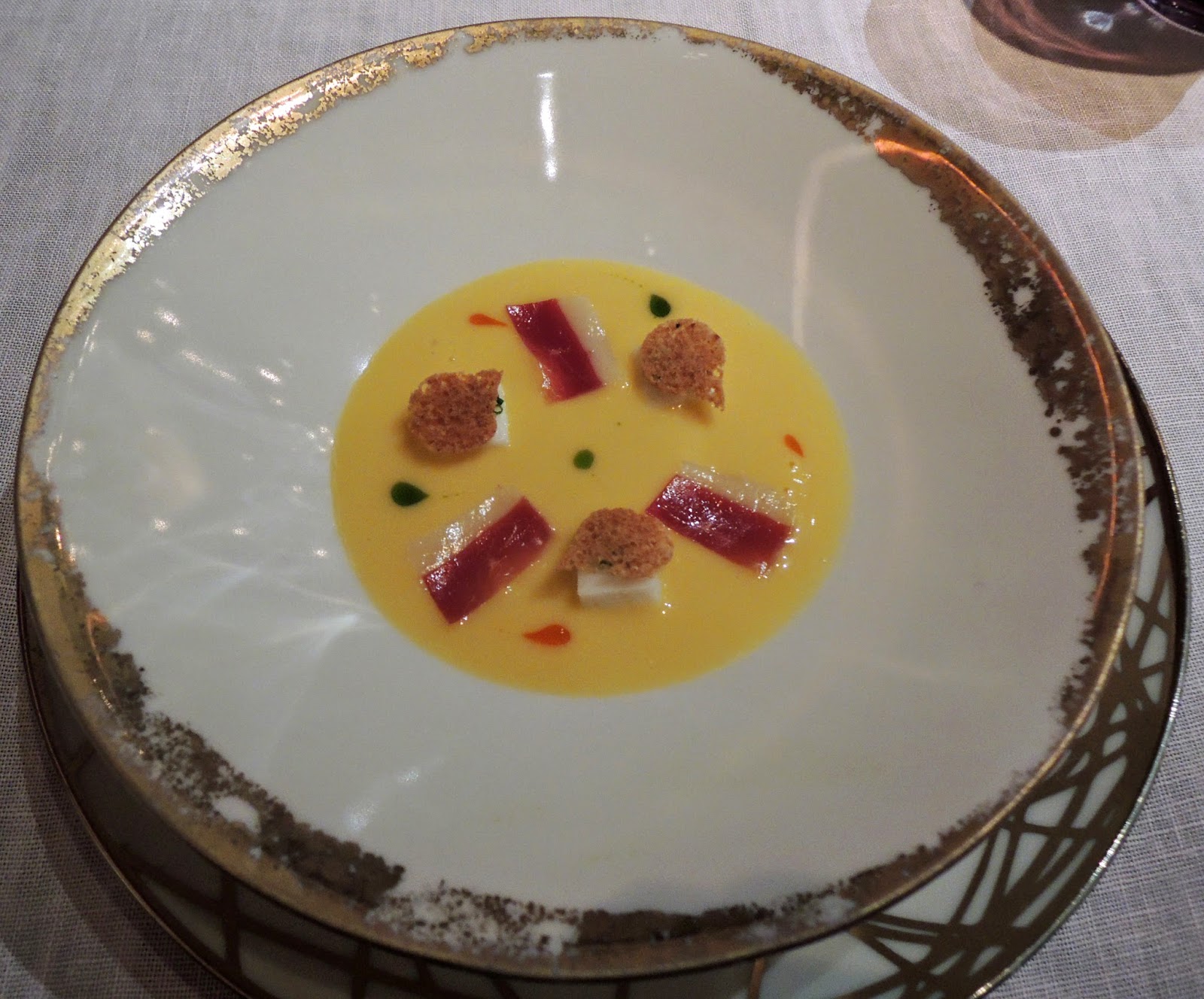 We started with an Amuse Bouche of corn veloute with smoked duck. The white square bits were described as some sort of savory marshmallow. Very delicious. 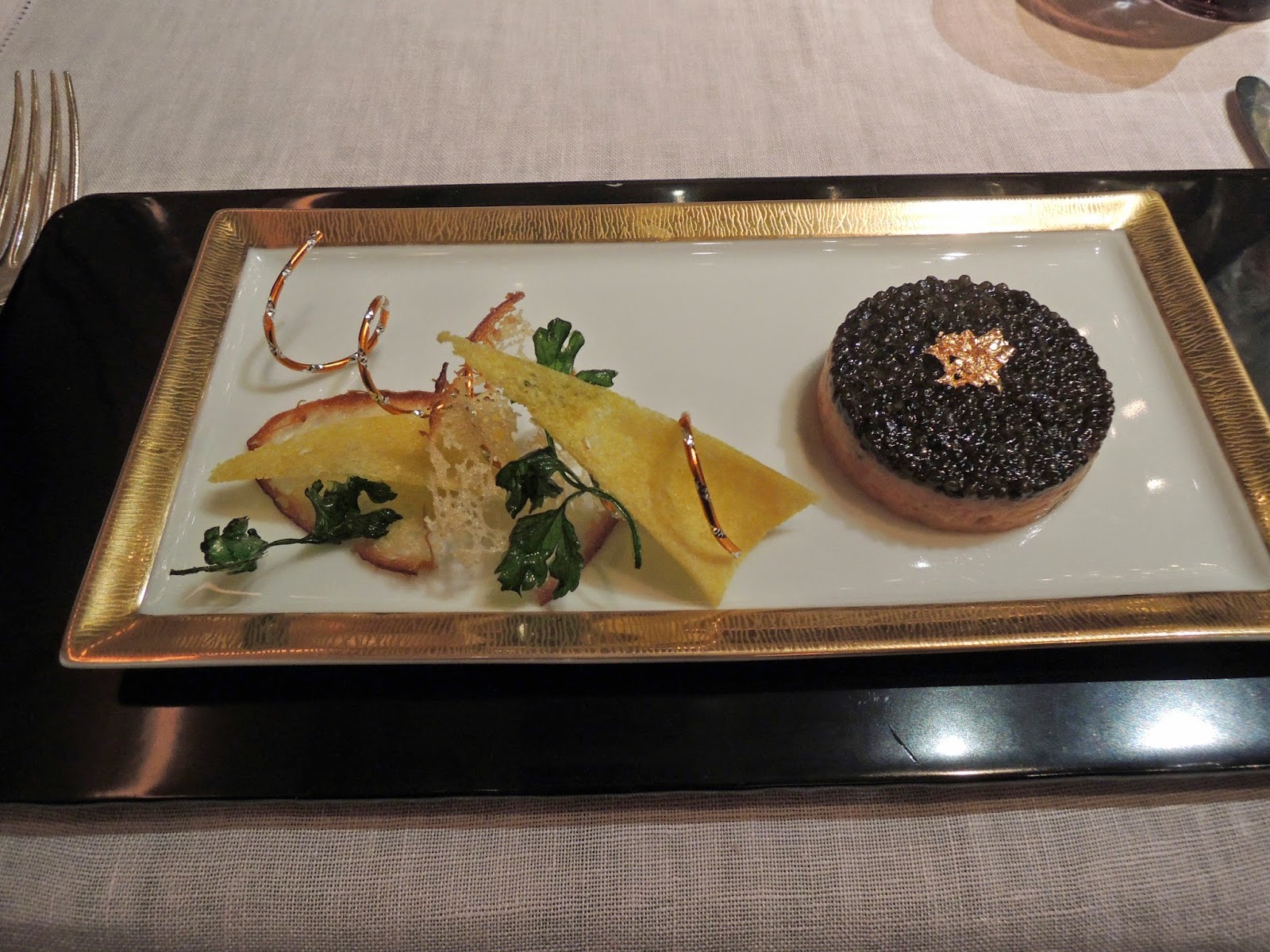 I had two choices for appetizer. I opted for Le Caviar Imperial: salmon tartare with osetra caviar. The salmon was mixed with some tobiko in order to give it a crunchy texture. I really enjoyed this dish super decadent. 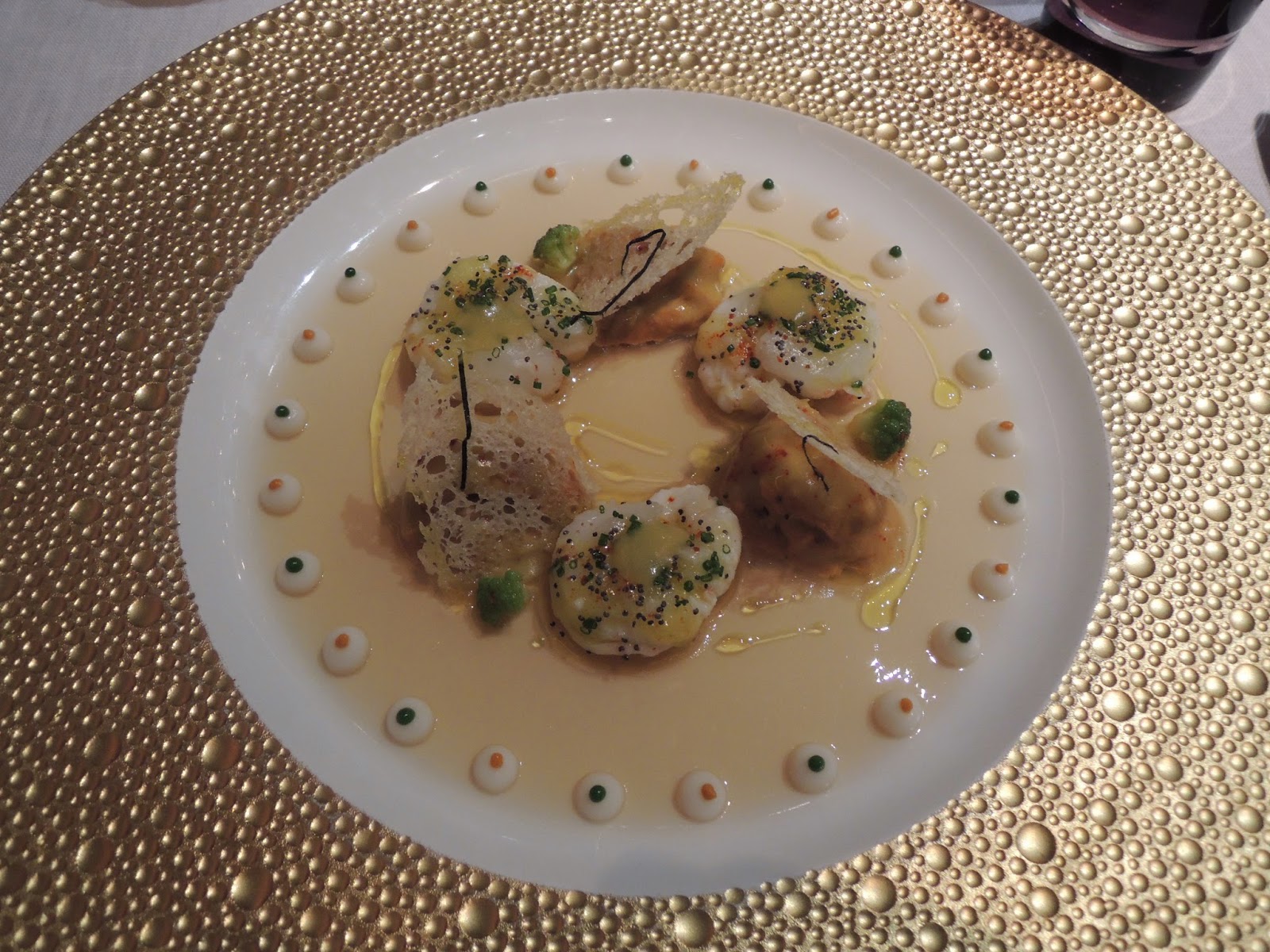 For my second appetizer I got L'Oursin, sea urchin with langoustine and pureed cauliflower on top of a vinegar gelée and seaweed. I love sea urchin and this was by far some of the freshest tasting I've had. The vinegar gelée was an interesting texture the slight sour flavor was great with the langoustine and fat of the sea urchin. I was amazed at the precision on the plating, each of little mini kisses of cauliflower puree were perfectly spaced and dotted. 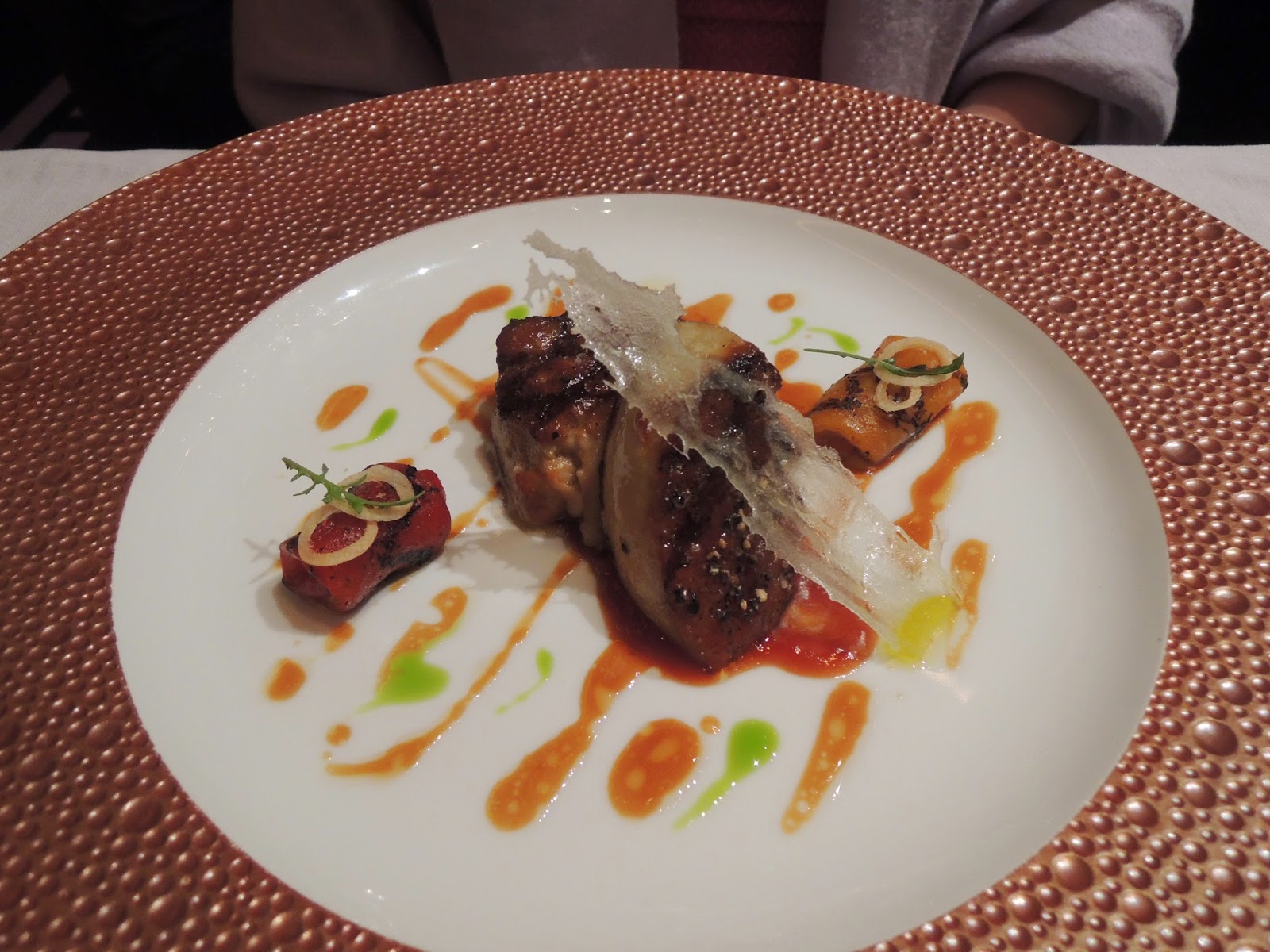 My wife got the Le Foie Gras De Canard, grilled foie gras bell pepper confit in acacia honey. She usually hates bell pepper but however they treated it she found it delicious. She felt the Foie gras was too rich,  I think when paired with honey I could see how it was a bit overwhelming, I dutifully took one for the team and helped gobble it up, I didn't have a problem with "too foie gras". 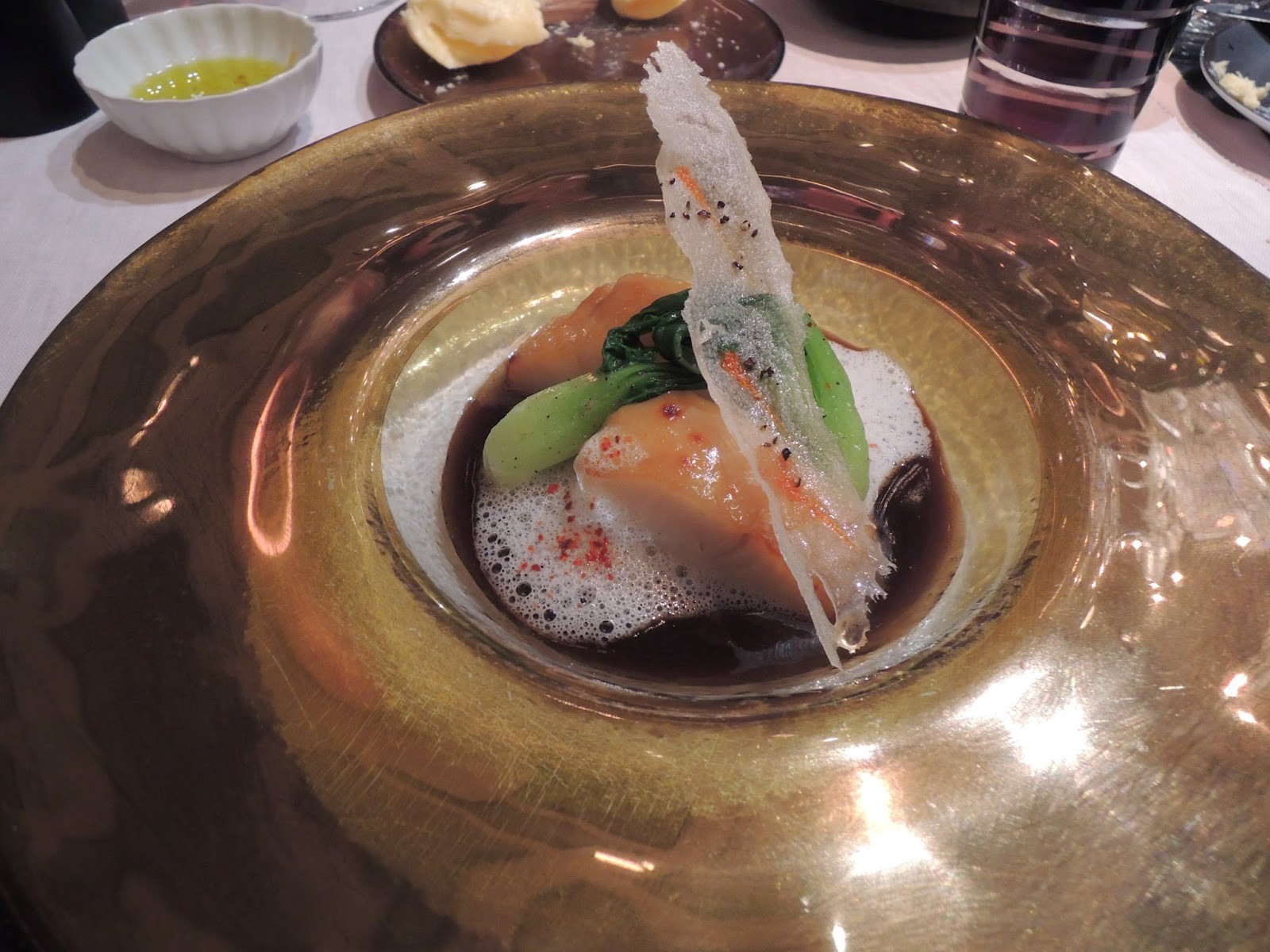 My first main course was a Caramelized black cod in Malabar pepper sauce with bok choy served with a lobster roe chip (you can do that?!). The fish was perfect, the sauce amazing. This is one of those things that I cannot describe it's just burned into memory. Second main course was a Sliced grilled beef rib-eye, bone marrow condiment with daikon and matsutake mushrooms. The beef was perfectly cooked and had soft melt in your mouth texture. Not one bit tough but a perfect crunchy au poive crust.  You see those chip looking things on the upper right corner, those were tiny eggplant slices lightly fried. It was served with a creamed potato which they didn't spare on the butter. 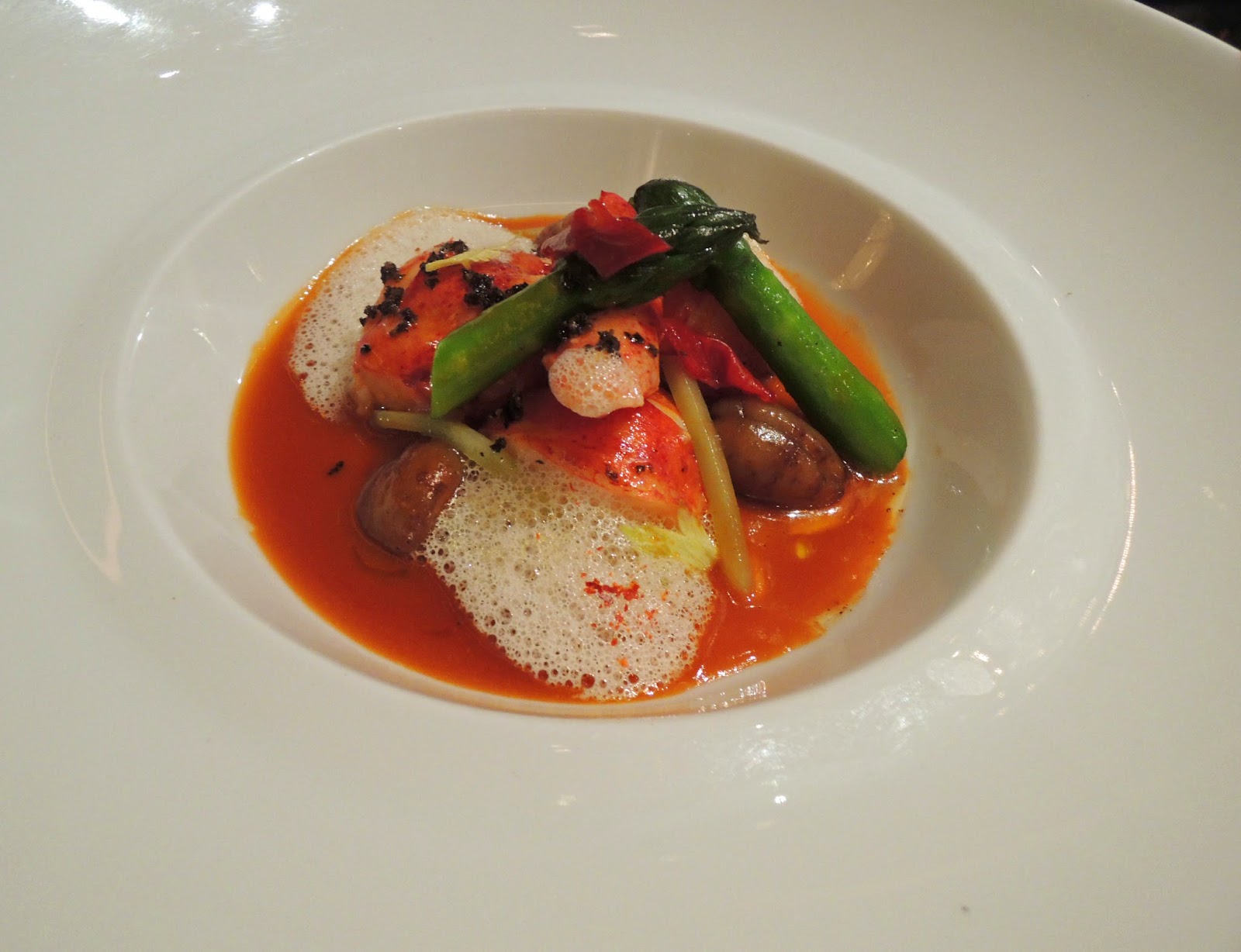 My wife's main dish was Lobster roasted with chestnuts and asparagus with shellfish jus (which tasted like they had some saffron in it). 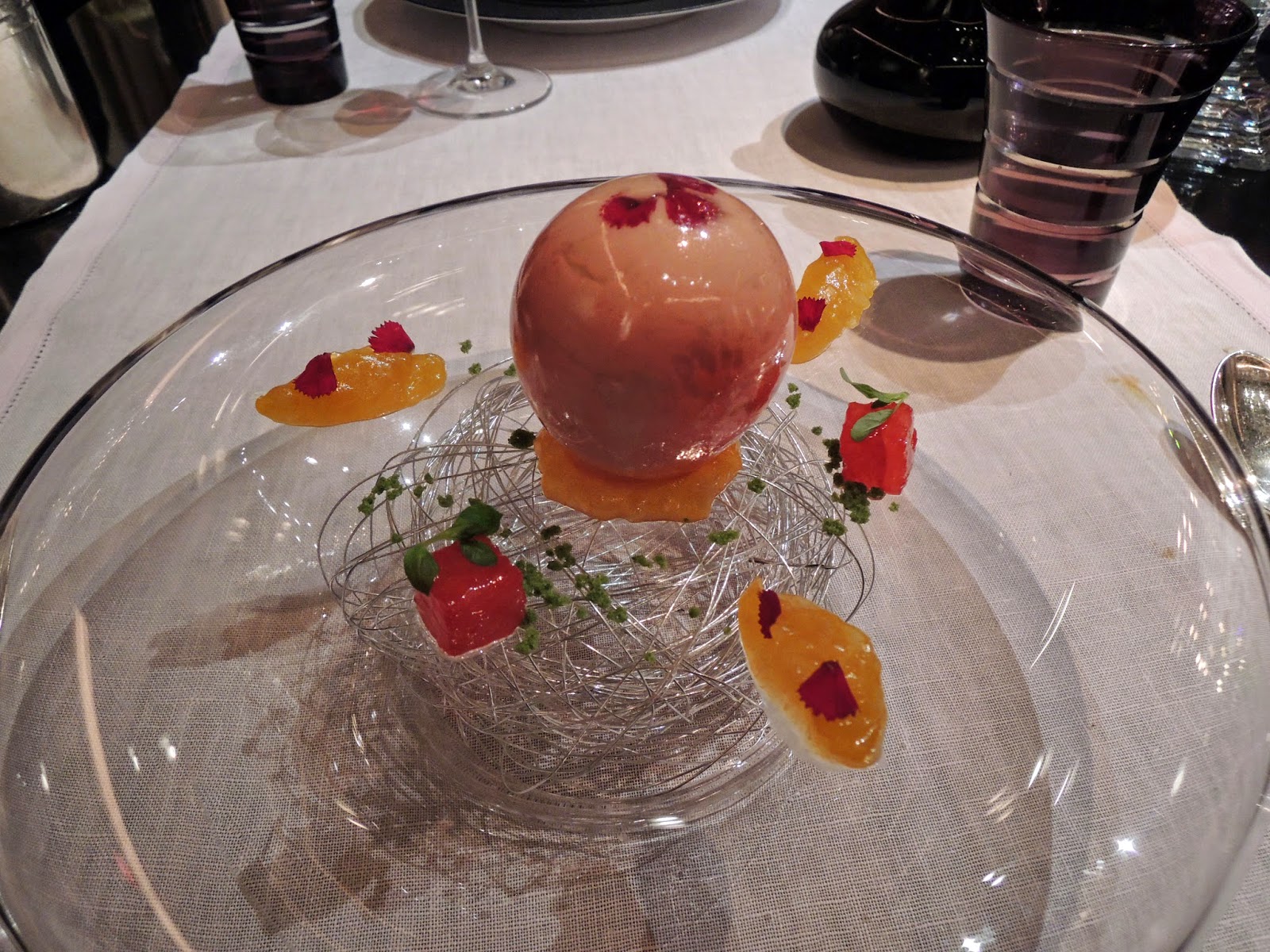 Finally (sort of) dessert La Sphére, bubble sugar sphere with campari sorbet, kaffir lime creme. I really hesitated to break into my dessert. The sugar glass sphere was filled with the kaffir whipped cream and a grapefruit sorbet (not campari). It looked like a Christmas ornament. It was served with a citrus marmalade and (somehow) perfectly cubed grapefruit and mint sugar crumbles. 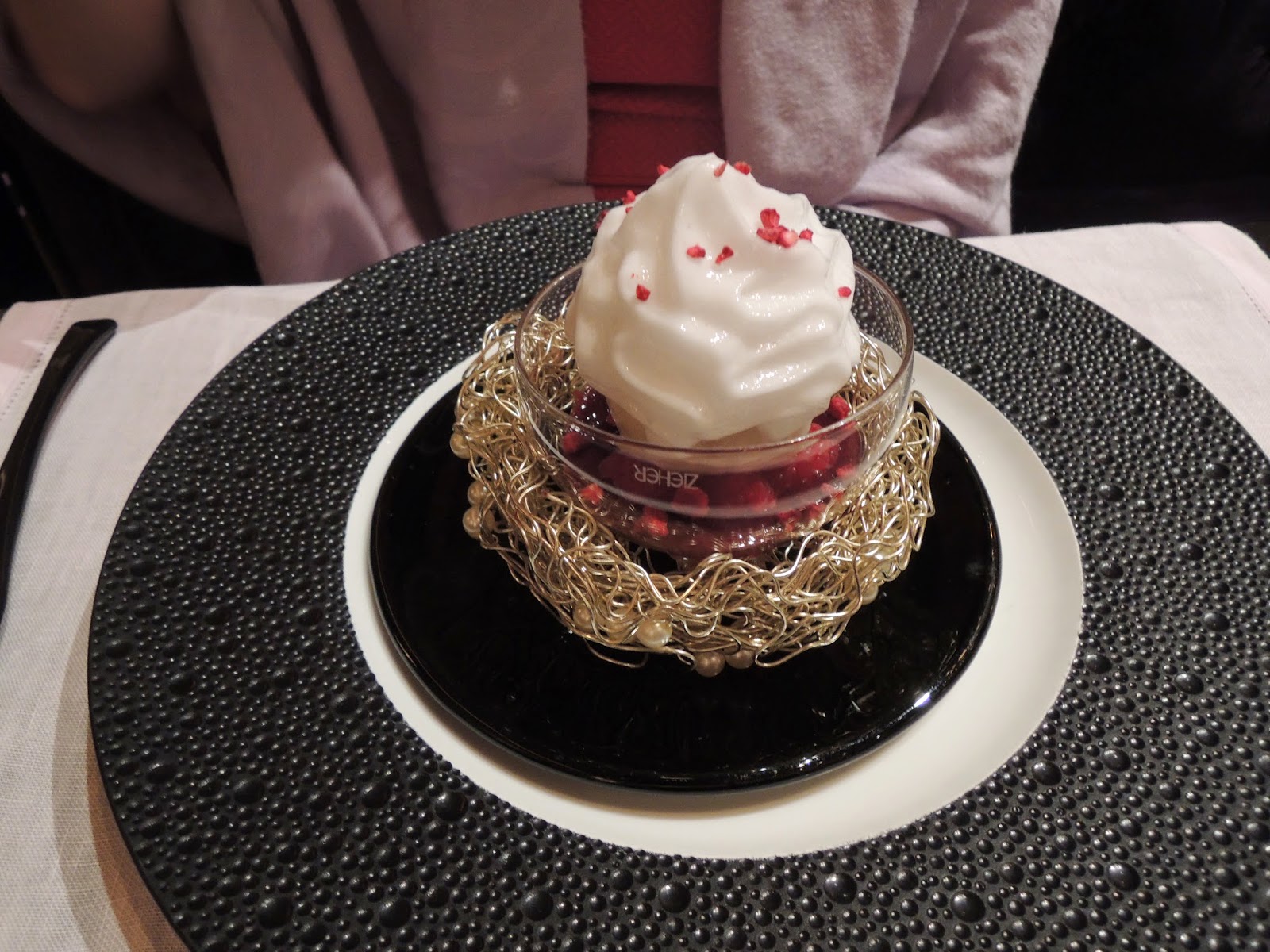 We also had the Lychee sorbet with fresh raspberries. 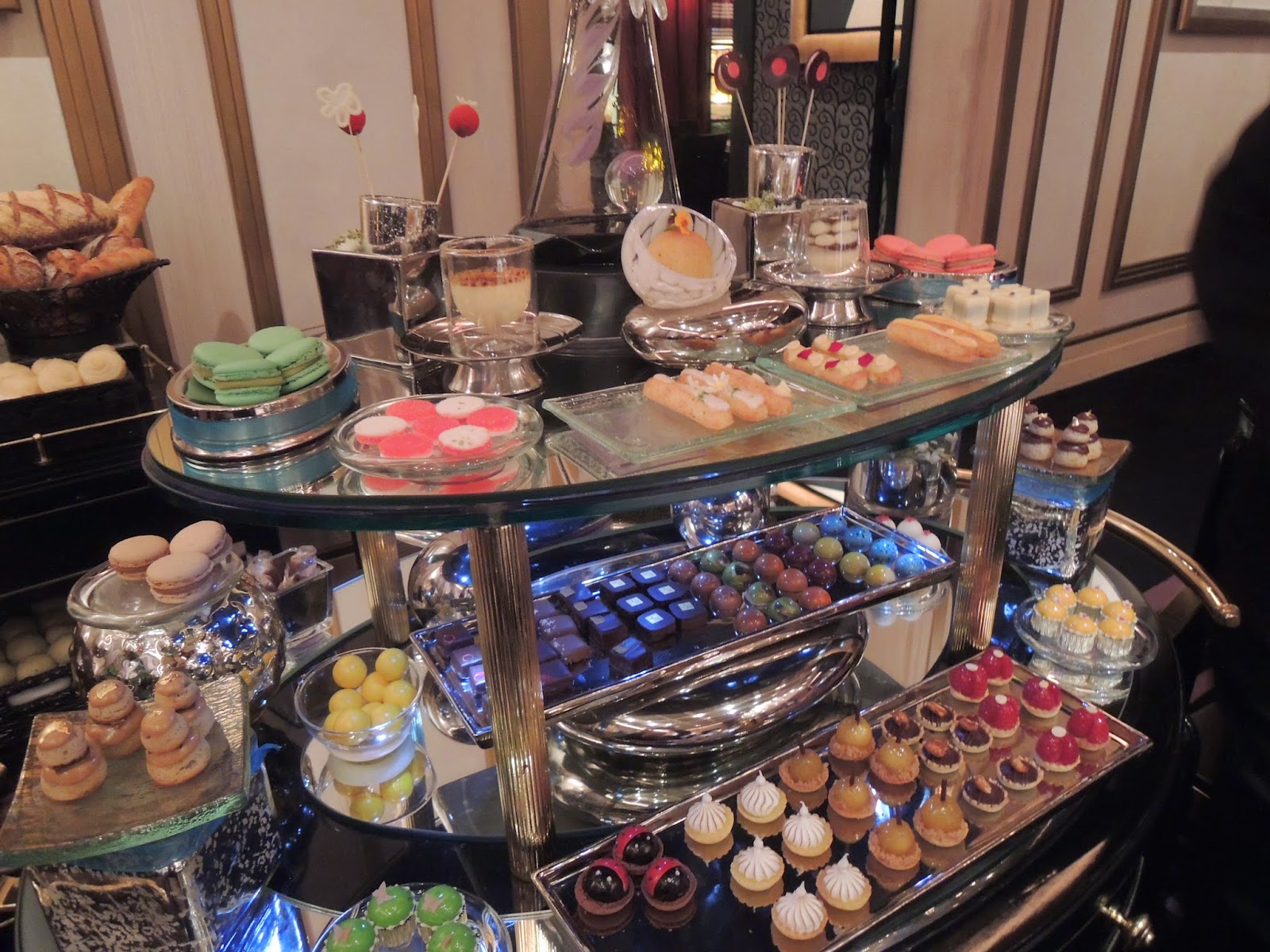 If that wasn't all enough they had yet another cart with just miniature sweets. 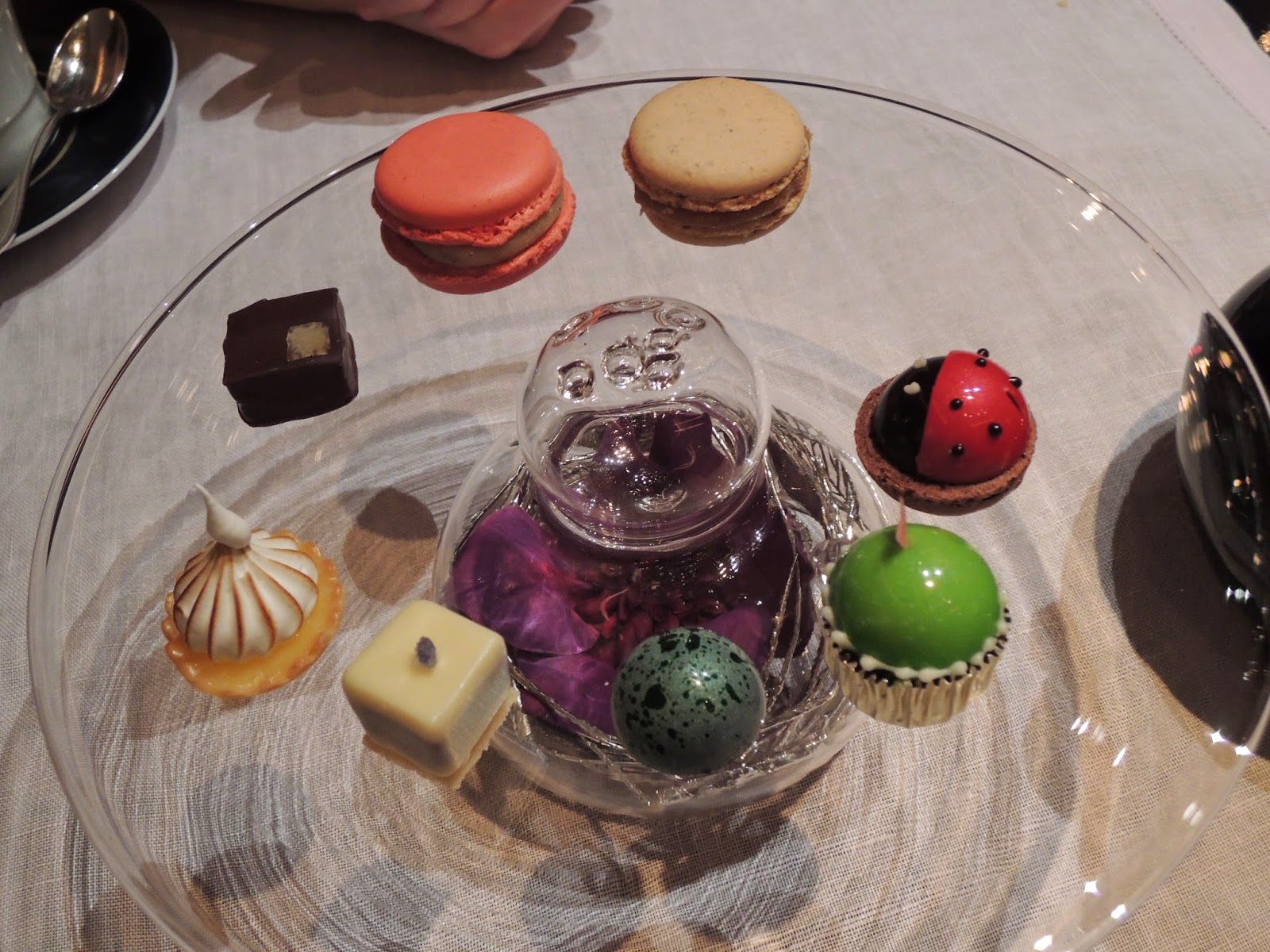 This is what we ended up picking. Each bite was delicious and the attention to detail was delightful (just look at the lady bug "mini chocolate macaroon"). They offered us more but it was impossible to have another bite. Starting on the left going clockwise, dark chocolate truffle, strawberry macaroon, espresso macaroon, chocolate lady bug "macaroon" , Pistachio cupcake with marshmallow topping, pistachio chocolate truffle, white chocolate (something), miniature coconut cream pie.

I've never had such a magical experience for dinner. The service was beyond anything else I've experienced by a long shot. My water glass was never empty and half the time I didn't even notice it being refilled. There were easily six people attending to our table. They struck a perfect balance of being attentive and not intruding on a romantic dinner. I'm glad to have checked this off my todo list a very memorable experience.
fine dining french holiday michelin yammering