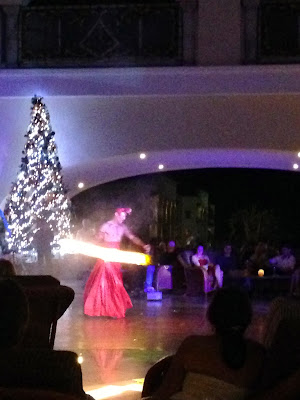 Day Two of my vacation at Playa Del Carmen. The daytime weather was a fabulous upper 70F and nights a warm 65F. They had nightly entertainment, above is a picture from their "Elements" show, obviously they were featuring fire.

Lots of food and drink so I won't bother you with a lot of yammering we'll just stick to the facts since there's more to write about for our day three dinner discovery.

I didn't bother with breakfast, it was the standard buffet, bountiful but just like any other you'd find. We were on the hunt to try out all of the restaurants in the resort and hit the Tapas and Pintxos. It was on the patio next to the Pelicanos. 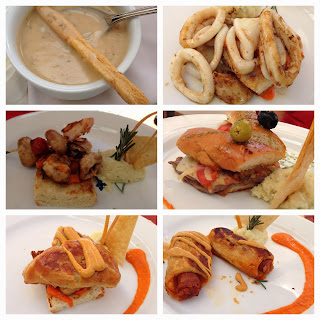 The food was ok, they follow a very similar formula of plating and the same paprika red pepper sauce half crescent and very similiar pale colors.

I ordered the Cream of Artichokes soup which was a pureed cream soup they added clams, fennel and chives, very good combo. To the right was the grilled Cuttlefish, the cuttlefish/squid was extremely tender and had really good smokey flavor.

We followed that with the Mushroom Brochettes: shrimp and mushroom sauteed in garlic oil and white wine and Sirloin Pepito: Kind of a Mexican version of a philly cheese steak with a pineapple pesto. 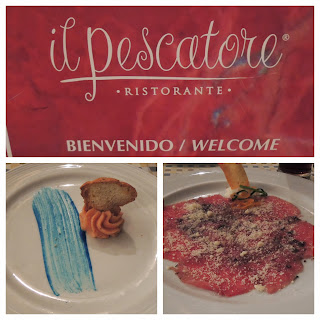 When we checked in we were told that there were a few restaurants that required reservation because they were quite popular. One even required an additional charge of $80 per person (not this one). Having had "pretty OK" food, above and beyond the low expectations that were set before us we figured we probably needed to start trying these restaurants. Il Pescatore was first on the list, it was located across the street at the sister resort. The chef started us with a amuse bouche of a serrano ham and potato mousse over toast it was tasty and a good start, we couldn't figure out what the blue stuff was and it didn't add any flavor (was it a play on surf and turf). It was quickly followed by my order of beef carpaccio au lime, the beef was marinated with anchovies which really gave this a unique flavor compared to carpaccio dishes I've had in the past we gobbled this up pretty quickly. 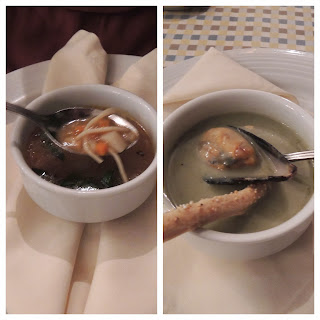 My wife ordered a minestrone soup and I had the florentine cream soup with mussels. The minestrone soup was light and surprisingly without beans (typically there are kidney or cannelini beans) my wife seemed to enjoy it. My florentine cream soup was very interesting, the spinach flavor was very present (not in a bad way) it tasted very fresh since they held back on the cream and the basil oil brought out a very fragrant note, it kept the soup from tasting like "pureed spinach soup", it was a pretty neat balance of flavors I've never had the chance to taste. 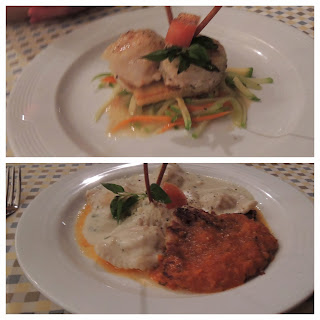 Time for the main course: My wife had a Fish Fillet A L'Orange served over polenta. The orange sauce was only a hint of citrus and the fish was very tender. I had the Pork Excalope Roman Style, basically pork pounded very thin over a tomato garlic sauce. The pork was extremely tender and delicious, I only regret how little I had. I opted to try their gorgonzola raviolis rather than the noodles in garlic sauce. The ravioli turned out a little dry in texture and the sauce was a little thin. 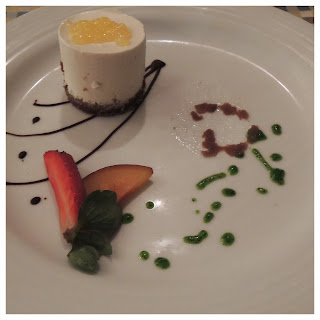 Finally dessert, Panna Cotta with kiwi and orange coulis, the green dots were the kiwi sauce that went really well with the Panna Cotta. I will say the Panna Cotta was a bit more gelatin-y than i've had before but maybe they did that so it could stand as tall as it did.

Worth going to the reserve ahead? Yes! This was definitely a finer dining experience than the day before.