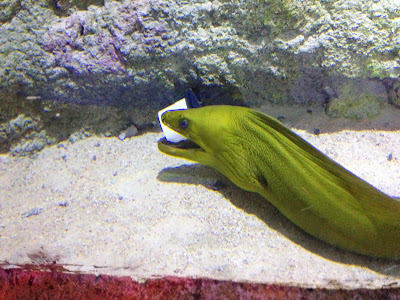 No I didn't eat a Moray Eel but I wanted to post a neat experience at the new Austin Aquarium that just opened up near me. They were having a half price sale on their annual price, which meant if I went twice this year it'd pay for itself. It's up by 183 and Anderson Mill for those that are in town and interested. I figure a quick trip report for the rest of the skeptics.

Now I'm use to aquariums being a lot bigger like the Shedd aquarium in Chicago or even the one we went and saw in Galveston at Moody Garden. This one is located in a strip mall and when I first drove by and saw that they were opening an aquarium I was thought that "Austin Aquarium" was going to be the name for a new fish store opening. When I saw a facebook post from a friend about half price memberships  I decided to bite the bullet, it was only $24 for the year pass I mean I've done more damage at a happy hour or the lego store. 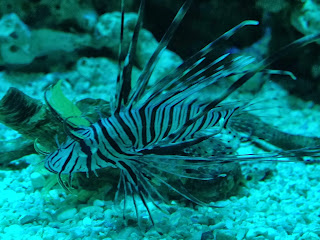 I will say I am pleasantly surprised. The aquarium had quite a few installations and large "open tanks" allowing for people to "pet" the fish. I got some sort of ray swim up and brush against my hand. They weren't completely done, there's quite a few "coming soon" among them a pair of otters, seals and more jellyfish. 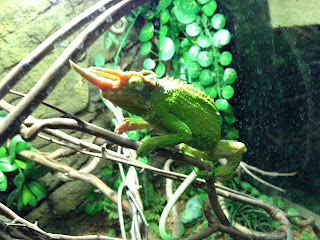 They have a insect and reptile exhibit as well as a tropical bird exhibit where you can pay to feed the bird. There were quite a few "eww it pooped on me" so I passed. There is an opportunity to feed the sharks too. There are plenty staff stationed in the various rooms to explain the different animals. All very knowledgeable, I quizzed the bug guy on the neuro toxin since I had just researched the puffer fish and he seemed delighted to have someone to talk more details with rather than the standard speal.

They have a party area for kids birthdays and the standard gift store. All in all I'm definitely going back.  They still have a few kinks to work out but they'll get that ironed out soon enough. I think after the huge rush of kids (they just opened a few days ago) this will be a pretty neat place to visit.
NIAB off topic yammering