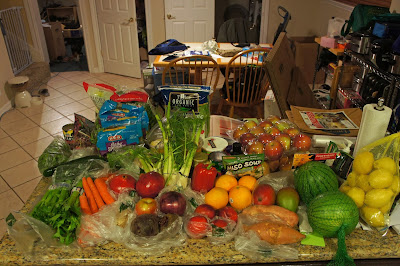 Ok a bit off topic here, but I figured it's food related so if you're looking for another bento you'll have to wait until I get my new kitchen setup. In the meantime:

So I stumbled on this video on Netflix called "Fat Sick and Nearly Dead" by Joe Cross. Basically it's this Australian who travels across America and talked about this 60 day juice cleanse and chronicle the benefits he and other's he's met along the way have received. I found the documentary more anecdotal about these people's results and a little low on the facts and figures (I respond better towards factual evidence) but I got the point and it sounded like a neat idea. I found a book called "The Juice Diet" by Christine Bailey. I liked the book because they had a weekend, one week , and juice for life section depending on how much you wanted to commit to the plan. And each section had a shopping list (fair warning the shopping list was somewhat incomplete) and a full plan on what juices and what to eat when (very helpful). 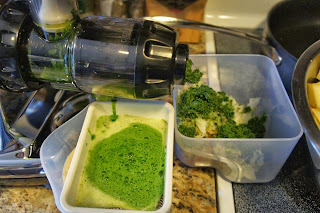 First we start with the tech: an Omega 8006 juicer. It's a masticating juicer meaning it has a spinner auger that crushes the vegetable/fruits to extract the juice. I chose this over a "centrifugal" juicer that push the veggies thru a spinning blade and uses a spinning colander to collect the juices, kind of like a food processor that would have a inner bowl in it to catch solids and fling juice to the outer bowl. From my research I went with the masticating juicer for the following reasons: 1) it pulls more juice out than the centrifugal juicer (I can't verify how much since I don't have anything to compare with, but the resulting pulp was very dry) 2) Centrifugal juicers tend to run hot and the heat does contact the juice. Purists will tell you that raising the temperature of the juice can destroy precious enzymes and nutrients. (ok that wasn't a major selling point but it made sense) 3) it's easy to clean 4)most importantly, it's not a single trick pony. the Omega 8006 can churn out tubed pastas as well as grind nut butters, almond milk etc. Cleanup was very simple we ran thru a few juices at a time and cleaned up between juices which really took like a couple of mins.  You can see in the following pictures how small you need to cut food to feed thru the processing tube.

The program? Basically we "ate" five to six meals/snacks per day. You can see the produce I purchased in the above title shot. (that was most of the food, a few things were missing from the picture). It all came out to roughly $200 in groceries $40 of which were supplements.

We started each day by downing a mug of water mixed with half a lemon (bleh). Not a promising start. 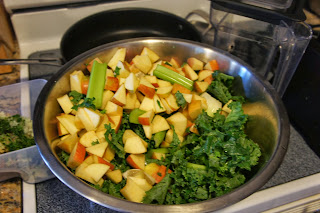 I was pretty amazed at how much juice we were able to get out of our first juice. Here's the before of the bowl of veggies (Kale, apple, celery, lemon). 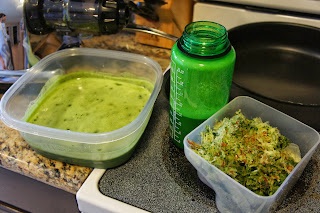 And here's what was left roughly two liters of juice and pulp. I didn't think there was so much liquid in kale, but I will say the resulting juice was quite tasty (despite it's appearance).

Mid morning we had some chamomile tea and two handfulls of mixed seeds. 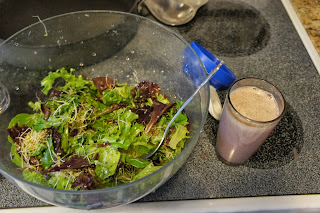 Lunch consisted of a giant salad and more juice: Pomegranate, grape, apple juice blended into a smoothie with yogurt flaxseed and some anti oxidant blend which came out to about 27oz.   The salad used flaxseed oil, lemon juice and hemp seed as dressing. As my wife put it, "my stomach is full but my heart is empty". The lemon juice was way too sour to be pleasant, I would have preferred salt and pepper with oil.

Afternoon snack was more tea and some hummus with some celery sticks. 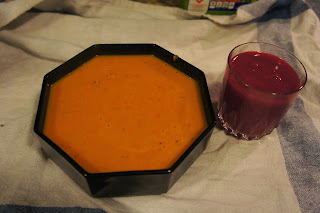 Dinner we made a soup of white beans, sweet potato, celery, red onion, carrot soup and the juice was made of mango orange and beet. I ended up adding a touch of salt and a heavy dose of oregano, basil and thyme into the soup to give it flavor. We couldn't finish soup. What you see above is only a fraction of what I had to eat. The juice was nearly half a quart and the soup was nearly two quarters per person. 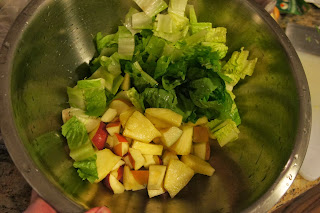 Finally for the last meal was a mix of romaine, pineapple and apples. This wasn't my favorite juice, definitely tasted grassy and some almonds. I was so full I could not choke down the pear I was suppose to eat. Still, I felt quite content with the food and I was feeling quite positive about the experience.