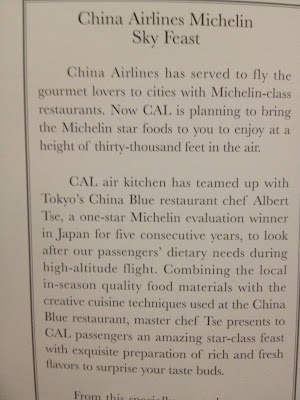 I've been doing a lot of travel recently, I mean two-trips-that-involve-30-hours-of-travel-time-each-way-inside-of-two-months type of lots. I've had the fortune (and airline miles) to upgrade myself in the crucial legs of the trip to make it not suck too bad and the first thing you notice in business class is that the food is clearly superior to what you get in coach. (not to mention free drinks and lots more leg room) So I'm going to devote a few posts to the stuff I got to eat. 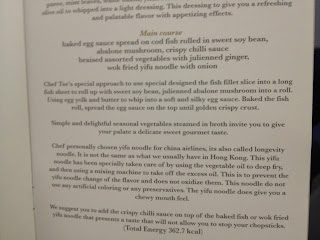 This first post is my China Airlines flight to Taiwan. It's pretty nice, they bring you a big menu where you get to choose each course of the meal, but the "China Airlines Michelin Sky Feast" caught my eye. Basically they teamed up with Chef Albert Tse of Tokyo's China Blue restaurant, he has earned a one star designation from the good people at Michelin. This really piqued my interest since this has to be one heck of a challenge for a chef, you have all the challenge of creating a first class meal and all of the constraints of delivering food *not* freshly prepared and put together in an airline kitchen. Obviously the meal itself will not ever earn an actual Michelin star since service and experience is part of a star evaluation but I was curious to see what the food would be like. Having never dined at a "starred" restaurant I have nothing to compare to. 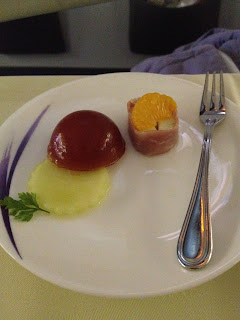 First course was not listed on the menu so I'll do my best to describe it. It's a pineapple wrapped in ham with a fruit jelly. I don't really know what it was or what fruit was suppose to the flavor of the jelly. The consistency was definitely not like jello. It was more dense, it reminded me of what it would be like to take a bite out of those big rubber balls you find at a toy aisle of the supermarket (not the hard super bounce balls) or a really rubbery cheese. The flavor was also indistinct not a very promising start but since it wasn't on the menu I can't blame or say it was part of the chef's design. 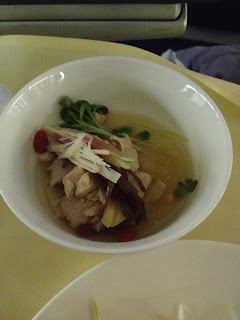 Next up was: summer flavored chicken. Which if you click into the menu pictures above you can read the full description. The short version is Chicken breast and chicken drumstick in a wine broth. It was served as a cold soup. The flavor reminds me of the herbal taste of the chicken soup from the wedding banquet I talked about. (oh side note if you were still looking for the easter egg take the first word from every paragraph and see what it says) The soup was an interesting play of textures from ingredients with varying degrees of soft to crunchy. 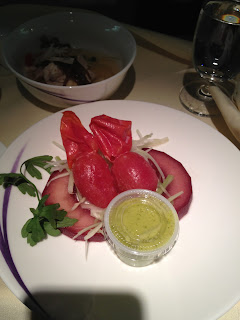 For the salad we had: Tomato, red wine braised apple, shaved fennel, celery salad with a green apple and mint dressing. Again served very cold. This was actually quite tasty as well. The dressing was pretty mute with only a hint of mint which was good since the apple was very bold. 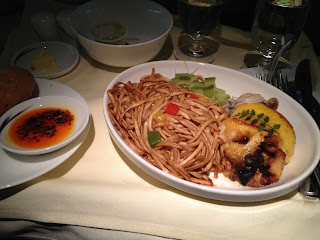 Sorry about the use of the "dramatic lighting" (read: overhead light) the no light versions were too hard to see. Main Course was: Baked egg sauce spread on cod fish rolled in sweet soy bean, abalone mushroom, crispy chilli sauce braised assorted vegetables with julienned ginger and wok fried yifu noodle with onion. (whew quite a mouthful) I enjoyed the fish, the "baked egg sauce" was a bit unusual it felt like custardy topping and the fish was quite tender and not overcooked. I've been fairly well impressed with the use of abalone mushroom in my recent travels, especially when used in context of vegetarian cooking (more on that in another post about this vegetarian restaurant later). The noodles were a bit odd. For the type of noodles used I was expecting a bit more elasticity and I think it's because they fried the noodles (so said the description on the menu). This no doubt preserved the noodles for delivery (without them drying out or being mushy if stored in a broth) but ultimately I didn't really like them. 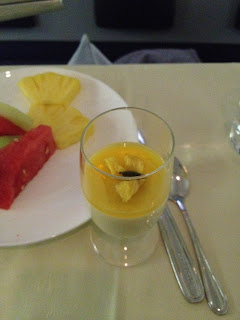 Finally dessert: Pineapple mousse, passion fruit jelly. The description really kind of nails it ".... pineapple, baked in low heat until the pineapple is dehydrated. The pineapple puree, top-grade vanilla ice cream, and home made syrup, whipped into slushy, aromatic, and ready to melt to adorn passion fruit jelly with dehydrated diced pineapple the distilled flavor of elegant scent to smooth out your traveling tiredness." It was a very refreshing dessert, which is saying a lot since I don't usually do dessert. The mousse was very smooth and light, and like most Taiwanese desserts not too sweet.

Anyhow, it was an enjoyable meal especially considering it was prepared/heated on an airplane. I like the attention to detail in the presentation, notice that they even placed the multicolored bell pepper squares on the noodles (that had to have been done by the airplane staff no way that could have survived a truck trip from the kitchen). I'm not sure what I expected from the somewhat gimmicky nature. I will say that compared to the other meal I found the quality of food to be about the same. I think the attention to detail and the full explanation of the thinking involved in the Michelin menu gave this meal an edge over the other one.
NIAB travel yammering