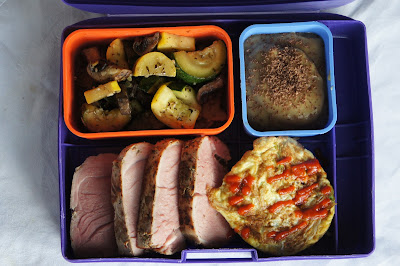 So i've been on this diet for a few weeks now. There's just some stubborn pounds I can't seem to lose and since I work out nearly every day it has to come down to diet. My doctor suggested I try out this diet called the Ideal Protein diet. It comes in four phases and phase one (which i'm in) has me eating their food with only my own cooking once per day. This happens until I lose 90% of my stated goal, which feels like an eternity from now. So to "celebrate" I decided to create a bento that has a *loose* interpretation of my diet. Half of the bento I'm eating now the other half would be allowable in future phases. 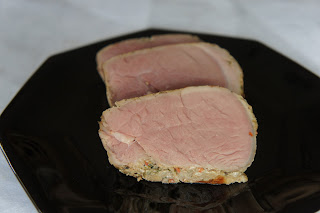 This is has been what I called a technically delicious lunch. I say that because sous vide italian marinaded pork with a yellow, zucchini squash sauteed with portabella mushrooms is indeed a wonderful lunch to have... Unless you've been eating it for about three weeks straight. Why did I select this golden manacle for lunch? Well it's possibly the fastest thing I could produce if I had to in the middle of the week. I purchase this pre-marinade pork tenderloin, it was nicely vacuum sealed so the procedure for this pork is literally: set sous vide supreme at 134 F, bring to temp, dump in tenderloin, wait four hours open package sear. Done! The pork is pink in the center but it's been pasteurized due to the length of time at 134F. I believe the FDA pasteurization tables say at least 45 mins at 134F, since it's an asymptotic curve to get to 134F that's why we put it in for four hours. 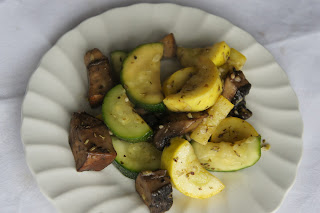 Even though I bought the squash and mushrooms, the local grocery store they have a prepackaged diced zucchini yellow portabella mushroom mix. I blanch the squash and cook the mushrooms down with some garlic and toss the squash in to get some browning. I tossed in a bit of dried oregano, basil and thyme voila done. 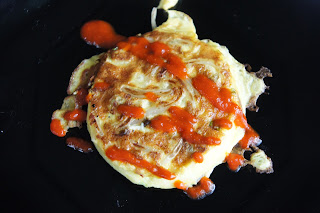 This next dish is something that I can technically eat if I chose to include it in my lunch plans. My only issue with the plan is how things are laid out. The diet is basically a high lean protein low/no carb diet. So there's four "meals". In the morning you get one of their protein packs (a shake, soup, bar, etc) for lunch you get "unlimited" salad (but it has to be romaine or iceberg lettuce, spinach and arugula are inexplicably counted as "vegetables") two cups of vegetables and one protein pack. Then dinner you get 5-8oz of lean protein and two cups of vegetables and again unlimited salad. Finally you get a "snack" which consist of one of their protein packs.  I suppose this works fine for the people that are use to eating three square meals a day, but I'm already a grazer. The first few days of the diet I was burning all the glycogen out of my muscles and liver and felt like I was dying during my work out (bonking, hitting the wall) I re-worked the diet a bit, I moved my "dinner" to lunch and started my "unlimited" salad at 11 and finish my lunch by normal lunch time with only consuming half of my protein. I then finish all of the protein at around 3pm. Leaving me with my swapped "lunch" to right after my workout and then accomodating my snack. This kind of created six total meals and evened out my energy burn it seems to do the trick. So back to this dish, I could indeed eat this dish as part of my dinner. My problem is two eggs count as my 5-8 ounces of protein and I would much rather have 8 ounces pork than two puny eggs. So what's in it? I sauteed some green onions and bean sprouts and used a cookie cutter to form my "mini omlettes" and topped it with some sriracha sauce. How simple is that? 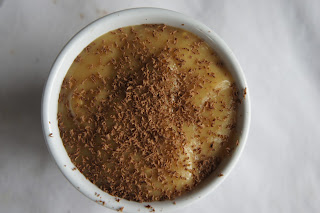 Finally, there's a "recipe" out there from folks that have "hacked" the diet and created new stuff using their packets. Basically they took the vanilla shake and added some stuff to thicken it into a espresso vanilla pudding. I simply took sugar free vanilla pudding substituted in a shot of espresso topped off the rest of the liquid component with fat free milk and then topped it with some dark chocolate shavings. The very little chocolate doesn't amount to much but it gives you a bit of sweetness. Most people really ended up liking the pudding.

Will I tough out the diet? I'm trying my best but it's getting hard. I've stared adding some new proteins and begun critically analyzing restaurant menus for things I can eat, but basically it's pretty miserable socializing around food when I only get one meal to have any variety with. On the days I have to go out with folks for lunch or meet up for half day of activities I basically end up starving because I cannot eat anything. I've also taken to challenging some restrictions of the diet. (what's up with calling arugula a vegetable and not part of my unlimited salad) I've pulled up nutritional statements and made comparisons with my coach. I also had to call her on the statement that "salt actually has sugar in it". You can't make statements like that to an developer and not have it picked apart. It turns out iodized salt does contain .04% dextrose in order to stabilize the iodine but basically to get one gram of sugar you have to consume 500 grams of iodized salt and if you do that this diet is the least of your problems. Anyhow I can go on a whole topic about salt (now that i've done research) but you get the idea, some of the rules of the diet don't seem to make much sense. I've also seen a huge outcropping of these diets recently, most of them follow a similar paleo diet principle and sell you a lot of packaged foods and supplements. We'll gut this out for at least a full month and evaluate my results. I do admit some of my clothes are starting to fit better.

The Charitable Baker said…
wow, yum, the omelette looks so good--I love bean sprouts and onions in it and the cute round shape! And I love what you did with the protein shake--great idea. Stay strong Jack--you can do it!!
July 11, 2012 at 6:31 AM