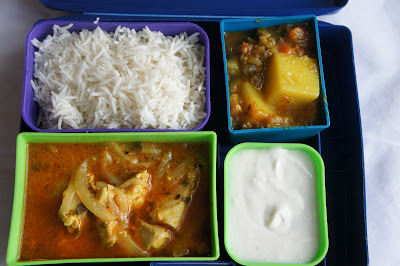 For whatever reason I'm having a hard time getting this post writen. As always life is busy and finding time to cook is just as hard, but whatever reason the last two bentos made a slow appearance into a post and this one seems to be just as difficult. Once I start it goes quickly, but my brain has been put into procrastination mode. Anyhow enough excuses.

If you remember, a friend suggested that I go through the various regions of India as a "set" of themes. A fabulous idea, Indian food is really diverse, each region makes use of different ingredients from spices to vegetables and proteins. This time we land in the west Indian state of Gujarat. Gujarati cuisine is heavily vegetarian based focusing on complex flavor profiles of being sweet, sour, and spicy (often all at the same time). 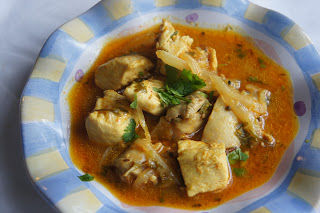 I realize I said that the majority of the dishes from Gujarat is vegetarian, but I usually get feedback that the bento tends to be less "satisfying" when I produce an all vegetarian bento. So after a little searching I did find a nice looking dish. My first dish is Achari Murgh, which is a braised chicken in pickling spices. The list of spices were pretty epic weighing in on eight with one spice completely foreign to me (and not quite easy to find). Nigella seed, also known as black onion seed, I don't know how to describe it, it's kinda of bitter. Anyhow, I managed to find a bit of it. The dish itself is very fragrant, my house still smells like Indian curry. I went with cutting up skinless boneless chicken breast and thigh even though it called for whole chicken pieces (whole pieces don't fit the bento box very well.) I've noticed from the recipes that I looked into all have a "thin" gravy as compared to the Punjabi bento which I attribute to the greater use of dairy in the northern state compared to Gujarati cuisine. 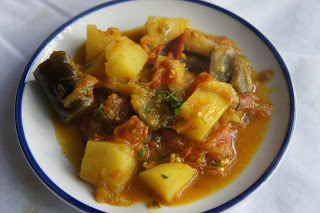 The second dish is Ringan Bateta Nu Shak: Eggplant and Potato curry. This is a very popular and traditional dish. The potatoes and eggplant are cooked in a tomato based "gravy". I think I over cooked the eggplant, I should have par cooked the potatoes before adding in the eggplant. This dish is traditionally served with Roti. My friend, the mastermind behind this theme was kind enough to hand make me a batch of Roti to go with the dish. Although a bit mushy on the eggplant side it was still a very flavorful dish and despite being visually similar to the Achari Murgh the flavors were very distinct. 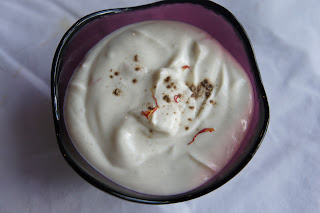 Finally dessert is a cardamom and saffron greek yogurt called Shrik Hand. This turned out to be very popular with everyone. The flavor reminds me of Kheer, an Indian rice pudding. The saffron added a nice color and a very subtle background flavor scent addition (much like how rose water plays into Kheer)

I'm still doing more research into my next Indian state maybe something down South where there's a greater use of seafood. I'll have to consult my friend. Stay tuned!