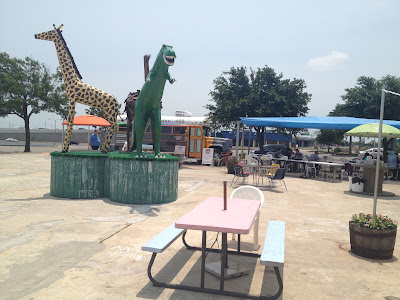 So two days later and we're back at the North Austin Trailer Yard (NATY) because my girlfriend really was craving some more ramen and I was game to check out the other trailers. It was a pretty nice day the only downside was that most of the trailers were closed. That probably explains why there were very few people around. 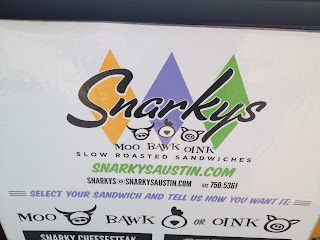 It turned out only Michi and Snarky's were open. And since I was on the low carb train I went with Snarky's. They do slow roasted sandwiches. Since it was a slow day I got a chance to talk with the chef and owner Chuck Watkins. He's been in the restaurant/bar industry for a while and decided to make a go of a food trailer of his own. It turns out he and his business partner were the ones that came up with the NATY idea. He wanted to build on the giant pink gorilla that was already located in the parking lot and go with a "zoo" theme, hence the sculptures you see from the title picture. Chuck said that he wanted to bring in a trailer destination to north austin (YES exactly my sentiment) for families much like the south Congress scene. There's a nice little mini playground for kids and they've put up shaded areas for dining. It's pretty well thought out. 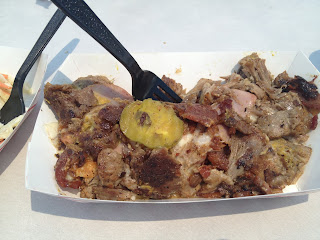 Oh right so the food. I ordered up the "cuban" I mentioned I was low carb-ing and asked for extra meat and bacon (mmmm bacon). So the setup is that you ask for the "style" cuban/jerk/italian/cheesesteak (I believe there were a few more options)  and then you ask for the meat chicken/pork/beef. Since I went for the Cuban Chuck suggested pork and he even offered to go sans bun and just deliver it on a tray for me.  The pork was delicious the combo with the crispy bacon made for a cool texture difference. And to round out everything a pig has to offer there was some ham. It finished off with some pickles, cheese and a Moja Mustard sauce. When you have it all put together it's quite tasty.  Chuck explained that he slow cooks the pork butts in the trailer for a few hours. I had meant to ask (but I forgot) how many butts he goes thru in a day.  I will say my tray definitely had a good ratio of bark to pork and the pork was moist and tender to perfection. Quite a hearty meal. 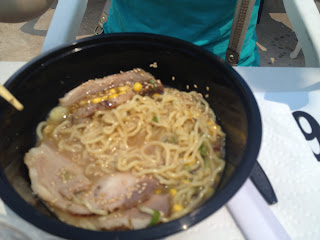 I noticed that my pics from our last visit to Michi didn't include any solid shots of the noodles, so here you go (we went with the Miso this time). I was speaking with the owner Freddy, and asked about the noodles. Apparently there's several categories, the packaged stuff that lasts till the next millennium, frozen which is a step better but still has preservatives, and "fresh" which will go bad if you don't use it within the week. All the top ramen places use "fresh", including Michi. It's definitely a quantum leap above the 10 cent package stuff. Oh, FYI my proposed trick of solving the cold egg problem worked. So if you get the egg (which is cold see previous post) use your chopsticks and move the noodles aside and gently push the egg to the bottom and cover with the noodles. Cover and wait and your egg will be nicely warmed up. Freddy mentioned they are quickly looking for a permanent location so they can scale up and serve more customers. I'm definitely looking forward to drinking the hot broth in a nicely air conditioned facility, summer's coming up and I'm feeling a bit iffy on eating a big bowl of hot noodles in 100+ degree temp.

I know, I know all this off topic non bento stuff. I got one done this weekend so I'll post it in a couple of days.
noodles off topic pulled pork trailer yammering