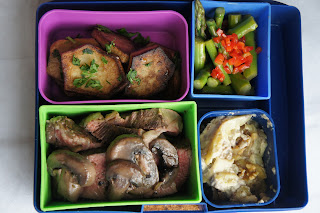 April 15th 2012 marked the 100th anniversary of the Titanic's sinking. There's been a small buzz in the food blog world of people having "Titanic Dinner Parties" where they feature some of the offerings of the 1st class dining menu. I was then inspired to offer my bento-ers a taste of what would become the last dinner on the Titanic. Unfortunately in order to still fit inside my budget I had to pick simple-ish dishes that I could easily buy the ingredients without breaking the bank. As usual if you see something you like I'm happy to post a recipe if requested.

So I'm sticking with my new format. I figured since I had to upload a giant image anyhow, you may as well benefit from seeing a bigger version of the photo instead of squinting at a smaller thumbnail. What do you think? It feels a little linear, but it does break up the monotony. I'm happy I'm able to use some natural lighting for my pictures recently but I miss my old Nikon, I still feel it takes better photos. I need to work on ways to distribute this natural light to erase some of these shadows. the bounce screens I have aren't doing the trick. 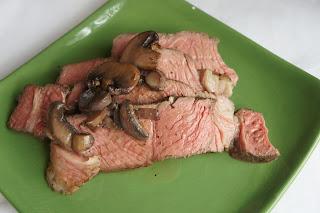 First, the Roast Sirloin of Beef in Forestiere Sauce (Wild Mushroom sauce). I skimped here and went with a normal sliced button mushroom. The sauce was a red-wine cream sauce. For the Sirloin it called for a two inch thick cut of Sirloin. There was a bunch of baking and roasting and browning involved in the recipe but as you know if you've been following me there's a superior way of preparing protein. I mean, it's not like I live in the stone age if I have better tech then let's not handicap ourselves. So I marinaded the steak as directed but instead of harshly treating the steak with a lot of heat, I sous vide the whole thing for about 4 hours. I dare say I may have improved upon what the chefs on the Titanic were able to produce. Sirloin is one of the cheaper cuts of steak and really benefits the most from the sous vide process. It doesn't have the benefit of as much marbling as a rib-eye or the tender qualities of a fillet mignon but when prepared sous vide it has got the boldest "meaty" taste of any of the steaks I prepare. 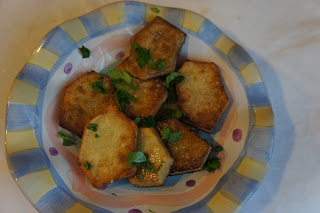 The Steak entree was accompanied with Chateau Potatoes. Usually the whole fingerling potatoes are peeled into little multi-faced jewels. I did not have fingerling potatoes and did not really want to cut every single one into tiny jewels (they wouldn't have fit in the box right anyhow). I opted to slice 1/4 inch thick jewels out of larger potatoes. I went with a white potato which contains less starch and hold up under this type of cooking. The potatoes were simply treated with a bit of salt and pepper and first pan fried (for the crisp) and baked until soft. I admit, some of my potatoes went a bit overcooked. These really turned out to be nicely cut "homefries" and were not anything (in my mind) to write home about. 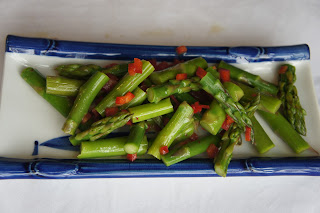 So one of the comments I got back from my diners was that it was remarkable how the dishes  had a "old school" feeling and taste to them. I have to agree after packing up the boxes I felt a little dissatisfied with the results. This was suppose to be 1st class dining on a ship where in today's dollars the passengers paid $124K. Perhaps we've evolved in the culinary sense over 100 years or more simply put, ingredients and tastes that are more common place now were considered exotic back then. You probably couldn't get most of the ingredients year round like we can. Anyhow this Asparagus Salad with Champagne Saffron Vinaigrette was a showcase of what I'm talking about. The saffron's flavor was drowned out by the Champagne vinegar the dressing itself was a bit too subtle I actually up-ed the sugar in the dressing to pull back some of the sour. 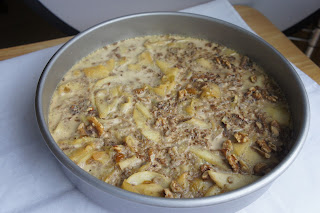 For dessert I opted for the Waldorf Pudding. It seemed the more interesting of desserts, it takes the contents of a Waldorf Salad (apples raisins and walnuts) and turned it into a custard. The directions asked for a ten inch pan, the resulting "custard" was about a 1/3 inch thick and fell apart on serving. I could see doing this with a bunch of shallow ramekins and serving them like a creme brulee. This barely served eight, were I to do this one again, I'd double the recipe hoping that the custard could hold a shape because of the increase depth. I think universally everyone loved the dessert but in the eye of the beholder (me) it was an ugly mess because of plating reasons.

Ok I'm glad to have gotten at least two bentos out this month. I've got a full slate of travel coming up and so I'll have to post what I can, when I can. Good news I'll have some neat photos to post soon.