NIAB: Slaw, Soup and getting back into the groove 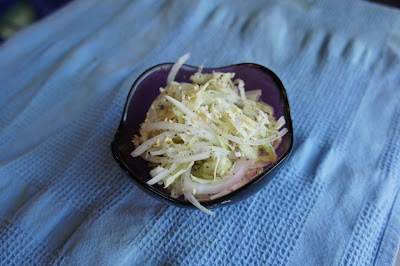 As I mentioned in my last post work's been real busy and it's been tough getting back into the regular rhythm of cooking. I was super bummed when last week because I was so slammed at work that I clean forgot to send my mail out to my bento group to solicit lunch people. I had even cleared the weekend so I could produce a bento. I suppose it was for the best since I really needed the downtime to collect myself. But as time goes by and I don't get in the kitchen to cook the thought of creating a four or five course meal for my diners gets more and more daunting. So in order to get myself back into the kitchen I decided to put together a few things just for me and my girlfriend.
I present my latest rendition of my favorite coleslaw recipe. I like coleslaw I'm not as big a fan of the mayo based slaws that you typically find. In fact my favorite "restaurant produced" coleslaw comes from the Salt Lick. It's a vinegar based dressing with no mayo. I tried my best to obtain a recipe from them but they politely refused to share the recipe. This led to months of scouring the internet and testing my own versions until I landed on this latest incarnation. I am trying to balance: obtaining a similar flavor vs knocking out unnecessary calories. And yes, I'm actually going to post the recipe, I figure this post only has two real dishes so adding a recipe won't make this unnecessarily long. (again, if you ever see something you want a recipe for just ask in the comments, I'm happy to post it if someone really cares)
I realize the Salt Lick recipe doesn't have white onion but the addition was actually quite good it adds a "bite" to it. You should let the slaw sit for at least 30 mins but I've found that overnight it gets better. It turns into a quick "pickle" much like a sauerkraut and mimics the texture of the restaurants version. So I'm betting that they salt their shredded cabbage and rinse it out. I believe I will try that next time because it might cut the bitter taste that my slaw still has that the original doesn't. 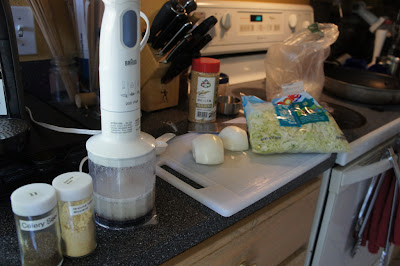 Coleslaw (Salt Lick Copy Cat Sorta)
1 (12 oz) bag of Angel hair shredded cabbage
1 medium white onion sliced thin
1/2 cup white vinegar
1/4 cup vegetable oil
3 Tbsp sugar
1 Tbsp celery seed
1 tsp ground yellow mustard
1 tsp salt
1 Tbsp roasted sesame seeds
1. Empty the bag of salad into a salad bowl and toss with the sliced white onion.
2. In an stick blender with "dressing cup" (see picture above) or a normal blender. Add vinegar, vegetable oil, sugar, celery seed, mustard and salt. Pulse until fully combined.
3. Toss dressing in with lettuce and onion in the salad bowl
4. Add roasted sesame seeds and toss the salad again
Notes: I used a bag cabbage because it's a lot simpler. I've tried this with a whole head of cabbage that I hand shredded and I used 1.5~2x the dressing. I tried apple cider vinegar but it imparts a weird flavor to the slaw and I didn't think the salt lick would have rice wine vinegar on hand. And although (through some social engineering) someone said they had a tiny bit of mayo (specifically Miracle Whip) I find the resulting dressing looks about the same as the dressing leftover from a bowl of slaw, so I think that was a red herring. Why would you stock Miracle Whip just for your slaw when you use so very little of it. I didn't roast the sesame seeds myself I just got the pre-roasted from the Korean store. But fresh toasted would bring out more flavor, if it matters to you I would suggest a tiny touch of sesame oil. 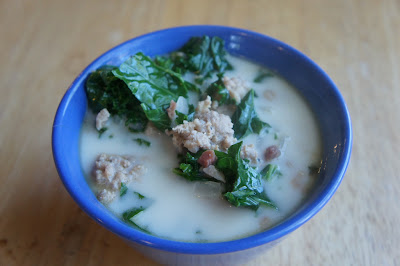 Finally, I got a recipe for a copycat of an italian wedding soup which my girlfriend really likes. I cut the cream in half and ditched the potatoes since I'm low carb-ing it. The results were wonderful. No recipe just a pic here for you to see.
I did manage to send out my cattle call for bento eaters and I've got my menu ready to go so look forward to a real post next week!
NIAB slaw soup yammering