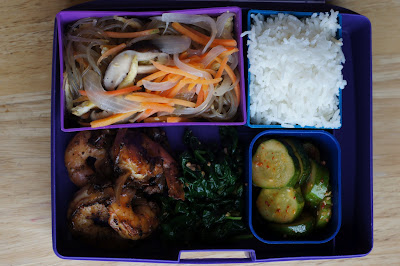 Work and life have conspired to rob me of my time to cook and blog. Boooooooo. Well I'm finally done with weekend commitments and work travel so I found a moment to put together a bento. I got a request to do Korean food. I've done Korean as a theme in the past and a couple of the dishes are a repeat.
Considering there's five items I was very surprised that I was in and out of the kitchen (yes dishes in the dishwasher) in three hours. Not too bad when serving for people. Don't let simple preparations fool you the dishes packed a lot of flavor. I got a few "best bento yet" comments so I guess I am on the right track. I picked up some Tamari sauce so this box is indeed gluten free.

Everyone was surprised I didn't do a Bulgogi. Two reasons I didn't: I did it before, and it was the first thing that popped into my head meaning it was too common and predictable. I like to explore new things so I found a nice bbq shrimp: See Woo Gui. The original recipe calls for shells on. A lot of asian preparations include shell on, but I'm cooking for a bunch of coworkers and the last thing I'd want to subject them to is de-shelling shrimp during their lunch hour. So why shell on? Well you get a more intense shrimp flavor to go along with the bbq marinade. Personally shell on is fine by me, but most asian preparations leave shell on and don't devein and I know that freaks some people out. Pretty simple marinade, tamari, mirin, sesame oil sugar and some citrus. I didn't want to break out the grill so I just used a searing hot skillet.

Oi Muchim is the name of this cucumber banchan (side dish). I was asked about the classification of this dish as a type of kimchi. Honestly from the research I've done it's hard to say. Kimchi is a fermented dish, it's contents do not necessarily have to be cabbage, cucumber is a possible ingredient, but the lack of fermentation here would technically classify this as a quick pickle. Kimchi is a pretty old dish, my first though was it had to be a pickle and must include red chile powder since all varietals of kimchi I've ever seen has the ubiquitous red hotness. But then I remembered that red hotness was only "recently" introduced since the New World was discovered (I know you're like "what?! Korean food with no red pepper paste/chili flakes?"). I did find reference that an international standards organization ruled on what it takes to call something kimchi which includes a fermentation process. Anyhow if someone reading this has a clear definition please let me know.

This banchan: sigeumchi namul is one of my favorites when I go to the local Korean restaurants. It is so simple to make. You simply blanch the spinach and toss in the dressing. The dressing consists of garlic, green onion, soy sauce, and a bit of sesame oil, that's it! Super good for you and tasty too.
This recipe was requested via tweet so for fun I shall reply with the recipe ala Maureen Evans @cookbook with her famous recipes condensed into the size of a tweet: "1 bnc Spnch,2 cl garlc,1 gr onion,1.5T SoyS,Sesme oil: blanch spnch 30 sec,shok cold,squeeze dry. mix other stuff in bowl. handtoss in spnch"
Yeah not a single character to spare!

This Chap Chae, like the Oi Muchim are my two repeats. You know those recipes you get on the back of the can of veggies, soup or box of whatever? Yeah this is one of those. I found this recipe when I bought the package of glass noodles at the Korean store. It looked so much better and flavorful than the recipes I had run across on the internet and in my books that I had to abandon my original shopping list and add new stuff. If you're familiar with asian food then the noodles look like a thick vermacelli, we'll you're wrong. I wrote about these last time and commented on elasticity. That really doesn't do it justice as a description. As I was plating these noodles for the box it was like pulling a hand full of really long rubber bands that were cut and thn mixed together. They just stretched so much and when they finally came lose they shot around. Yeah, I know doesn't sound fun to eat, but it's weird biting into them, they are soft and full of flavor. If you get a chance, skip the bulgogi next time and order some of this or better yet order both!

Finally, my new favorite soup for the winter, Kimchi Jigae. I've made this several times this winter after being introduced to it this thanksgiving during a potluck I hosted. That version used tuna, the traditional recipe calls for pork belly. I've tried a version where I tried to cut back on calories and skip the pork belly and add a little bacon drippings that I had on hand. NOPE definitely not the same. The final recipe I ended up with doubled the volume of liquid and spices because as much as I like the original (more like Kimchi Stew), I like the flavor of the broth more.
I had a mini upgrade in tech this time around. I purchased a connector for my Sony Nex 3 so I can use my old Nikon D50 lenses. These photos were shot with my "Nifty 50" or 50mm fixed lens. I still need to compare these shot to my previous shots, but I gut feeling is they look better. The 50mm captures light so much better than the pancake lens.
That's it for today. I'm hoping to get on a more regular schedule for bentos. Until next time, thanks for popping by!
Box Contents:
asian Korean noodles seafood shrimp spinach