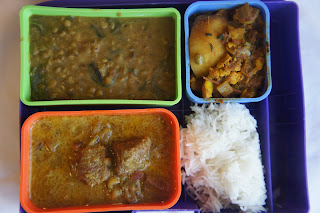 By request I have produced another Indian themed bento. It was quite timely since the newspaper was featuring this Indian cookbook author that wrote a book on cooking traditional Indian dishes with a slow cooker. The book is called "The Indian Slow Cooker" by Anupy Singla. I just found her blog and will be earmarking it for a full read. I enjoyed the book, but I bought the e-book version for my nook and it's just hard navigating reference material on an e-book versus have the old fashion tree killing paper version. I do like the idea of adapting a cuisine to using the fire and forget slow cooker, it's a good way to save stove space and the lack of need to supervise the cooking lets me still have a reasonable Sunday. I will say I seized the opportunity to buy yet another slow cooker bringing me up to three (ouch am I like the slow cooker version of a cat hoarder?).

This Lamb Korma recipe actually didn't come from the book. I grabbed a few recipes from online and took some liberties. The resulting dish had a thinner curry than you normally would get at the local Indian restaurant (dunno how it compares to authentic) but I'm betting they used lots of ghee (which I skipped) and a ton more heavy cream. I believe one variation (northern style) even used ground cashews for thickening. Either way the five hours of cooking made for very tender and flavorful meat. I think the only complaint I got out of this bento was that I didn't include enough rice for both the curry and the dal. I considered using the larger container for rice, but I really didn't want to "cheap out" with the rice as a filler. Goes to show you that there are just certain things you gotta have with Indian food and plenty of rice is on top of the list.

I'm still playing with my new camera and my new acquisition of a reflector to bounce some light from the sun. I'm particularly fond of this picture, the colors really pop out and the picture is nice and crisp. Oh right the food, Aloo Gobi or Spiced Cauliflower and Potato. This was the dish that was featured on the paper (and online here). I was quite a bit concerned with the lack of liquid in the recipe. But just as the author promised the whole thing really cooked down. With this dish, I used White potatoes and I wasn't necessarily happy with the texture. The potatoes were cooked all the way through, but they had a really firm texture that at first bite made me think they weren't done. I believe this is from the lower starch/waxy characteristics of the white potato. With this slow dry heat treatment, I'm wondering if a russet (baking) potato would be a better choice the higher starch content would soak up the excess liquid from the cauliflower and have better flavor.

Palak Aur Sabut Moong Dal is a green lentil with spinach stew/soup. Really it could be considered either, as a classic dal you eat it with rice, but i've seen references to this recipe called a soup, which if you think split pea then you've got the right texture in mind. I had my doubts that the moong dal would actual break down, in Chinese cooking the moong dal is used as a dessert "green bean soup" (and the moong dal is called moong bean rather than lentil). Even under pretty generous pressure cooking the bean still has a reasonable held together texture. But I suppose if you subject anything to eight hours of cooking time even the most hearty of ingredients break down.

I got pretty good marks on this bento, and the theme requester was quite happy. I'll have to circle back to the cookbook and try out a few more of the recipes. Anyhow, as always thanks for reading!