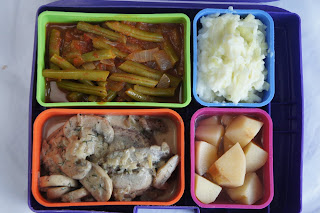 It has been one long and hot summer here in Texas. We broke quite a few records locally, most days 100+ degree weather, most consecutive 100+ degree weather, and I believe we clinched hottest August in the US *ever*. It's been one of those summer that felt so ridiculously hot you simply have to cry at the sheer absurdity when you step outside. Last week that all changed (apparently it was only a brief respite since we're back to 100F today) and over the course of a Saturday the weather was actually quite pleasant. Tons of people went outside and enjoyed the cool weather, and if that's our preview of fall then bring it on. In honor of that very brief week long preview, I decided on my theme to be a "preview of fall".

Fall and winter foods always scream meat and potatoes to me and that's kinda what I went for this lunch. I started lunch off with a Beef Tenderloin in a Mushroom Cognac sauce. As usual I went with a Sous Vide treatment on the beef, it's really the only way to go since you're saving space and producing amazing texture. I finished the steaks in a cast iron and made a stroganoff-like pan sauce. The sauce itself called for beef broth, which I supplemented from the leftover liquid from the vacuum bag. This added a pretty strong beefy flavor more so than just the broth alone. I liked the introduction of dill from the recipe it goes with the sour cream based sauce nicely.

Meat and potatoes can be quiet the heavy combo, so I made these tomato stewed green beans. I had them simmering for a good 30 mins or so and I had to hot swap the pot (with the boil potatoes) and I think the heavy heat caused my beautiful green beans to yellow slightly (they looked fine and tasted crisp as I was about to pull them but after I turned around it changed dramatically). Goes to show you how an additional minute with too much temperature can do to you. I liked how it soften the beans a bit more so they didn't crunch like they were raw but I wish they were able to retain their color a bit better. A simple blanch and throwing in tomatoes and onions would not have been enough to infuse the beans with enough flavor. This really did require a slow and delicate cooking process. Not a complete fail, but I could have done better.

For the potatoes I made some Sour Cream Leek Mashed Potatoes and they taste just about as yummy as they sound. The sour cream and milk made for a very cream texture. I'm a bit on the fence about the use of leeks here. They didn't really add much to flavor and they seemed a little stringy in texture. Had I chopped/diced them they would have just gotten lost in the potato. In this case I think go big with the onion flavor or go home, there are plenty of good applications for leeks I just think it's a bit too subtle here perhaps some scallions. I went with a white potato, I couldn't find any yukon golds both are fine for mashing they have a lower starch content so they hold up well under boiling but I like the yukon gold variety because they can be a bit drier which would have offset the creamy texture that the sour cream added. That or I should have been more judicious about adding and mashing/stirring.

Finally, I saw an interesting recipe that required poached quince. Quince is a cousin of the pear and apple, having a bit of the characteristics of both. It's pretty old fruit and has quite a bit of history. It's a fall fruit so I figure it would be a good addition unfortunately since it isn't fall, it was a bit harder to come by. Apparently as you poach the fruit for a long time they turn a nice deep red color. I didn't have enough time to carry it that far so I went for a quick 45 mins in a bit of water honey and lemon quince. The result was a very tender fruit that had a nice aroma of honey. The fruit itself is not terribly sweet so the hint of honey and lemon really sat well with this "dessert". I could actually see steeping a bit of tea in the poaching liquid and serving it as a hot tea. (hmm. I'll have to remember that.)

It's funny how quickly you get out of practice when you're not cooking regularly, this lunch took quite a bit of effort for me despite trying my best to be organized. I'll have to work on my planning this next week as I've got a lot going on. Anyhow, Thanks for reading!