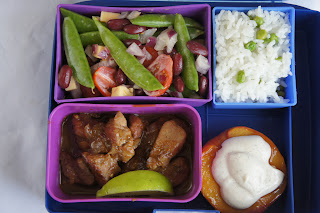 It's been hot out here. We just broke the record for most consecutive three digit temperatures, it was set in 1925 I believe. Not exactly a "We're #1" cheering kinda moment but I noteworthy none-the-less. As the days of summer drag on, it really gets harder and harder to contemplate making lunch. There's all the driving around to buy food, and then cooking and rushing around, something about this heat just saps your energy. I pushed through and decided that a simple bento around the tastes of summer would be a nice theme. I tried to stick with things that were light and vegetables that tended to be in season.

We start things off with the Asian caramel pork. I simply cubed up a bunch of pork tenderloin browned it up and made a nice sauce with some soy and brown sugar. After cooking the pork and onions I simmered the pork in the sauce until thick. This dish definitely needs some sort of accompaniment because I think by itself the sauce makes it too sweet. If eaten by itself the pork (sans sauce) was just right in that it picked up a ton of flavor from the sauce during it's braising time and still remained tender. This would have actually been great with a traditional steamed bun.

Whenever I think summer foods, I think of fresh vegetables, salads, vibrant colors and flavors. This Sugar Snap Pea salad is exactly that, the snap peas provide a nice interesting crunch texture and the vinaigrette is a nice burst of flavor. This dish produced a mix reaction and it mostly centered around whether or not folks like snap peas. Kinda like carrots some people don't like the raw snap pea. (too much crunch? too "raw" a flavor?). I liked the use of gouda in this recipe, it adds a bit of salt to the salad and combined with the slightly sweet vegetables balances out the acid in the dressing.

The pork was accompanied by a simple green peas with rice. The short grain rice was dressed with a little bit of rice wine vinegar, kinda like you would with sushi rice for making rolls. When combined with the pork it helped pull down the relatively sweet sauce in the pork dish. It's a great super easy side, I made use of frozen green peas and my rice cooker did all of the work.

Summer is definitely peach season, just going to the farmers market you see a lot of stalls featuring Texas Peaches. I love fruit based desserts they tend to be super easy to make and you can always rely on the natural sweetness of the fruits to bring a healthier alternative to usually empty calorie "bad" desserts. Here we toss the peaches in a bourbon mixture and slowly bake it down in the oven. I topped the peaches with a greek yogurt that I mixed with a bit of honey and vanilla bean. Universally this was the favorite in the box this week. I can actually see this as an easy party dessert to make, it's not quite finger food, but surely something nice to serve for a summer occasion, I'll have to keep a note of it.

On the tech side, I did get to try out my new light reflector, my kitchen has one bank of windows and a sliding glass door. Depending on when (time of day/sun position) I get to "picture time" for the food it can cast some pretty deep shadows. I have a two sided reflector (white/sunlight) and I tried some various light bounces to even everything out. I do still miss my SLR. (oh that reminds me I need to do a post on this camera of mine).

Enjoy Summer and try not to pass out in the heat. Till next time!