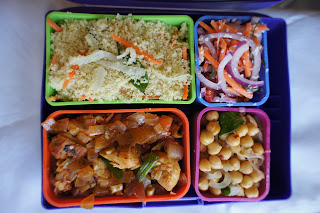 This week I saw a blog post in my google reader that took me into the rabbit hole of Sri Lanka cooking websites. Sri Lanka isn't one of the first countries I think of when I created my list of culinary countries to visit, heck outside of news reports of Sri Lanka I didn't know much about the place. From a brief study of the country it appears it inherits culinary traits from the Dutch and the Portuguese from colonial times, and Indian and Southeast Asia due to its proximity. I wish I was able to unearth more information about the culinary heritage. I only know what I've been able to find thru combing thru recipe stories and a brief blurb paragraph in wikipedia. What I know for sure is there's no shortage in the use of hot peppers, coconut and a large variety of spices and curry dishes which dominate the recipes that I ran across.

The main dish today is called "Devil Chicken" and let me tell you it's a scorcher. The recipes I ran across were a bit vague on exact ingredients and I had to do some extrapolation on tastes based on the regions around the country. Obviously the "Devil" in the chicken meant it needs to be hot, and since I had to scale the recipe up I changed up the cooking methods and ingredients. First I seared the chicken in batches with some home made chili oil to start the first layer of heat. Once seared brown I dumped the whole lot in and added the spices which flavored the chicken up. Then I cooked up the veggies which consisted of tomatoes, red onions, a healthy dose of fresh green and red chilies and took a moment to deglaze with just a bit of chicken stock. The recipe called for chili sauce which I wasn't quite sure specifically what type so I blended a bit of Sambal Ulek as well as some Sriracha, I figure the two complemented the tomatoes and the lemon juice. Finally once done I combined everything together to heat up and bring the flavors together. I personally didn't find it overbearing in heat considering the shear amount of pepper and sauce that went in. I had a few others that disagreed. >:)

For a bit of starch (and to difuse the heat), I found a recipe for spiced couscous. Although it called for dried chilies the actual final dish was not very hot at all. The main flavor contributor were the curry leaves. Three of the four dishes for this bento make use of curry leaves. This seemed to be a heavily used ingredient in Sri Lanka cooking. I've done a fair share of cooking Indian food and seldom run into the use of curry leaves. I mean I know it's used (I bought the fresh leaves from an Indian grocery store) I've just never had to use them in a dish. Definitely an interesting ingredient it has a very unique flavor. We use bay leaves to impart flavor in stews and soups but curry leaves are have a more prominent flavor and I don't believe have the same kind of application. I first fried up the leaves in some oil before adding the rest of the aromatics, this added to the chicken broth base and really gave the couscous some flavor.

Kadala Thel Dala is a very nice chickpea dish. It too uses the curry leaf, which is first pan fried with mustard seeds and chilies. This was a really quick dish to put together. The mustard seeds gave a neat caviar popping texture. It's not quite as full flavored as a Garam Masala, but simple is better in this case. I think I would have preferred to let the onions actually carmelize some rather simply soften as was called for. And it could have used a strong dose of heat.

Last we have a Carrot Sambol or carrot salad. Again lots of onions and curry leaves. There's a good amount of fresh chilies but since there was no heat applied you only get bursts of heat since no oil was released via a cooking process. The "dressing' is a bit of plain yogurt and lemon juice. The dish is a nice fresh flavor and texture to lighten up the menu not to mention an attractive color splash to the bento. I originally forgot to add the coconut flakes and I'm very glad I remembered to add it. It changed the flavor of the dish dramatically.


I really liked exploring Sri Lankan cuisine. I had a few of the dishes that I earmarked that used some more foreign ingredients but was afraid of introducing them without tasting the results myself. Dishes like Karavila Sambola, bitter gourd salad for example is made of an ingredient that I'm not the biggest fan of, but the cooking style might change my point of view I'm just not willing to roll the dice for my diners on something even I think twice about eating. Anyhow, thanks for dropping by! Ayubowan!