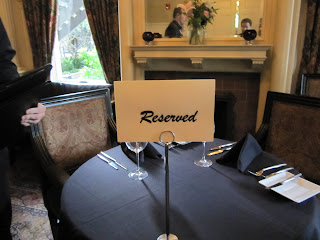 As I said, May is a tough month for my blog. Lots of travel and weekend commitments are keeping me from my usual bento delivery at work. I plan on doing one this weekend so stay tuned. In the mean time I wanted to post some pictures from my birthday dinner. My fabulous girlfriend Sophie treated me a very romatic dinner at the Mansion at Judges' Hill.

The restaurant is in fact an old Mansion that has been renovated to be a bed and breakfast. There are two dining areas one in a large hall and a smaller secondary room (about the size of a living room). We got really lucky because a large conference booked the mansion and large dinner space and they decided not to accept any further reservations or diners but since we reserved before the big group we got the whole secondary room to ourselves. (nice and cozy) 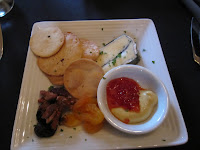 We each got the tasting menu, which at $35 per person is a really good deal for the amount and quality of the food we got. First course started with a cheese plate. The cheese is a Texas made cheese called "Eden" it's a blue brie wrapped in fig leaves. We got some candied pecans and dried apricots and it was served with a Chili jelly with Asian mustard. I was a little skeptical about the jelly, mustard combo with the cheese but it turned out to be pretty tasty. 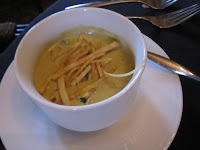 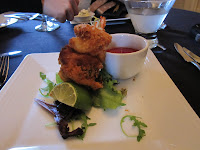 Second course we ordered the Fried Gulf Shrimp and the Smoked Gouda and Poblano Soup. The waiter commented that the soup was the best thing on their menu and he was right! The consistency was not to thick as to feel heavy when eating it and the choice of smoked gouda was interesting, I'm not big on smoked cheese generally, but I guess when turned to soup form it's pretty good. The Shrimp was stuffed with Hatch green chilis and was very nice as well, just not as nice as the soup :). 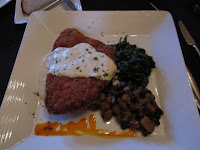 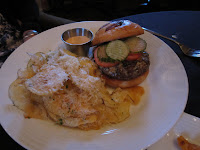 For our main course I went with the Broken Arrow Ranch Chicken Fried Antelope. It came with a black bean Chayote hash (which I had mistaken for eggplant). I liked the antelope, it's the first time I've had any, the meat was pretty tender and had a "gamey" flavor but it was very subtle. My girlfriend got the Strube Ranch Kobe Burger, the waiter explained it was an American Kobe. It was served with some kettle chips with a bit of truffle oil. I'm not a huge burger expert so I can't say that I could tell the difference between the Kobe beef versus regular beef in this form. It was a good burger. 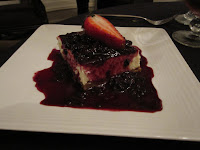 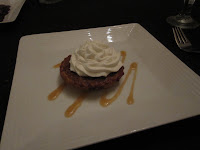 Last but not least dessert. There were only two selections so we just got one of each. The Texas Chevre Cheesecake with blackberry compote was good. Not too sweet and an interesting looking texture. The Chocolate Bourbon Pecan Tart was just as tasty. We had a bit of trouble with the shell it was a little hard to break into but the pecan pie filling was very nice.

Thanks to my wonderful girlfriend for one of the best birthday's I've had in recent years. So happy!
birthday event yammering