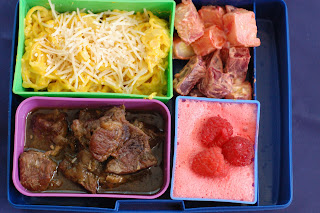 Back to Peru, I still have ingredients on hand from the last Peruvian bento so this is still a continuation of my pantry raid. There were so many awesome dishes that I spied from last time I felt it was a perfect time to sling in another Peru based theme. The cuisine is quite rich, lots of starches and heavy meat so I really struggled to make recipe alterations and pick things that would at least feel light. I think since my bento-ers eat these things in two sittings I'm still ok with the healthy theme.

We start with a Seco De Res. I again went with a Chuck Shoulder Roast cut of beef here, I think it's probably the best cut of meat to stand up to four hour slow cooking. I alternated the crock pot between high and low settings each of the four hours hoping to shorten the cooking time but still get the most out of the longer slow braise. I loved the braising liquid, it consisted of two bunches of cilantro pureed down, some aromatics and of course beer (I only had guiness on hand, seemed to work). The beef was melt in your mouth tender and the stewing liquid had a wonderful taste of cilantro. I'm really happy with this dish.

Next in a bid to use up all my gluten free spaghetti and the unopened jar of Aji peppers, I present Tallarines con Salsa de Aji. The sauce is a pureed yellow pepper that is enriched with some evaporated milk. I cut the butter and added a touch of cream and cooked the sauce down really good before adding the pasta and tossing it. The Aji peppers have a nice healthy kick to them, so it should satisfy my current audience that seem to have no fear of the capsaicin. This indeed makes the bento fully gluten free so a happy coincidence. (some of my diners or significant others are GF so it's nice when I can keep it that way.) I was quite surprised at how rich this dish came out, evaporated milk is not something I usually make use of, but seems to be very prevalent in Peruvian cooking. It might have to be something I stock in the pantry since it seems to have some versatile uses.

I looked really hard for some sort of vegetable side that wasn't full of cream or butter or starch and carbs. The best I could do is this Beet, Potato, and Carrot salad. A very simple dish, boiled root vegetables and tossed in with some olive oil mayo and mustard (I opted for both dijon and simple yellow mustard) I liked how it turned out, the beets and carrots added a good degree of sweetness to the dish without feeling too heavy, the potatoes were a nice addition and I like how they picked up stripes of the beet colors while I was cooling the veggies.

, we have a Raspberry Espuma. I used some evaporated milk and whipped it like I would whipping cream and combined it with a bit of raspberry gelatin. It actually setup a lot harder than I expected. I was thinking a foamy like substance, but it was more like an airy more substantial gelatin. I garnished it simply with fresh raspberries.

Again another super fast bento, I clocked a nice three hours and 25 mins. Not too shabby. I'm gonna have to keep this trend for next week since I'll be cooking for a dinner party later in the evening. Ok enough yammering. Thanks for reading!