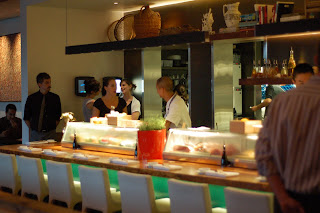 I'm all kinds of jetlagged from my trip to Europe but I couldn't help but accept an invitation to visit Uchiko. Uchiko is the sister restaurant to Uchi, my favorite restaurant in Austin. Chef Cole is a owner here but he's put executive Chef Paul Qui in charge of the endeavor and he was a lovely host. I really love the ambiance and vibe here you can see the influences of Uchi. The restaurant is similar but still stands on it's own on atmosphere, there's a lot of energy the staff were buzzing around and extremely friendly. I've been invited for a return visit next week so there will be a follow on to this post.

Lots of delightful showcases and many of the items we were presented were fanciful ideas and experiments so it's hard for me to map them to existing menu items, but it's a great show case of what they're all about which is taking ideas and experimenting. The first round of appetizers included some "cracklings" of squid in black ink and truffle shrimp paste fried up and served with a black truffle sauce. To the right you'll see their take on Srirachi sauce, the sauce had a nice sneaky heat to it but was at the same time creamy instead of tangy.

We moved on to a dish of scallops with a nice cilantro sauce with a "cereal and milk tulie", I believe this was a slight departure from their koviche, a very tender yummy bite of scallop with kalamata, none the less a beautiful single bite. There was a nice slice of green apple that provide a bit of tartness and helped to deliver a crisp taste. You can see the care and attention to detail on the watermelon and tuna "akami te", the masterful knife work to cut the tuna and the attention to individual ingredients was humbling in that someone would put that amount of care and attention for every single tasting but the results were delicious.

We had two fried entrees the first was the tempura fried eggplant "tempura nasu" with a nice sweet chili sauce. I could only have one since we had so many other delights to sample. The real treat was the fried Tuna tendon that is usually the "leftover" for the kitchen staff. Basically after harvesting the tuna meat you have the tendons of tuna that they fry and let the kitchen staff have as a snack. In my opinion this is one of the best and most delectable "treats", the fish tendon was definitely tempura-ed fish that had a nice "chew" to it, not as flaky or dry as fried fish.

The next appetizers are a yakitori which was quite similar to normal yakitori, perhaps my untrained palate didn't pick up anything distinguishing, very tasty. And Chef Qui presented a nice spring roll with asian pear and pork belly with fish sauce. It was a fun dish but I think there are some kinds that need to be worked out. I didn't get the usual rich tastes of pork belly and it fell apart really quickly.

Ok as I say constantly desserts are lost on me. We had a full court press of tobacco cream, chocolate fury and corn interpreted many ways. All of them were tasty and good however, I was most impressed with the corn dessert. Chef Cole told me that he challenged the staff with the color yellow as a theme and they worked back and forth until they settled on corn. I will say that they represented corn in texture and taste in more ways than I expected and still kept with the idea of dessert. YUM! (that says a lot since I hate sweets) If you go to Uchiko I would highly recommend getting this: sweet corn sorbet, polenta custard, caramel salt and lemon the dried crumbles were some sort of dehydrated corn tossed in with sugar.

As always it was good to see my blogger friends and geek out on new camera gear. Thanks to the staff at Uchiko for such a warm reception and showing off their skills. I'm looking forward to dinner on Monday!
Update: Here's what I had on at my dinner at Uchiko. Superb! 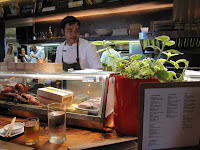 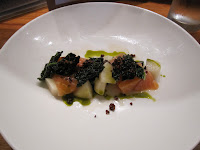 At Left Chef Paul Qui was on the front lines with his army of sushi chefs. My first starter was yokai berry - atlantic salmon, asian pear, yuzu and dinosaur kale. The dinosaur kale is fried and topped with a candied red quinoa. The sour yuzu was a great pairing with the sweet fruits. I was really interested in the candied quinoa what a great idea! 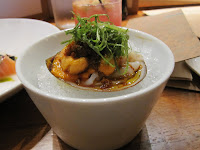 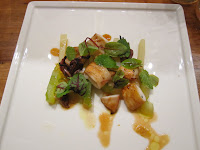 I ordered the Uni sashimi and Chef kicked it up by adding some fresh ingrediants they had on hand, he added some shrimp roe (? I didn't even know that existed) and some very fresh clams. I followed it with ika yaki, fresh squid with korean pepper compressed apple sorrel and red curry. Very tender and delicious. You really can't go wrong with anything you order here. 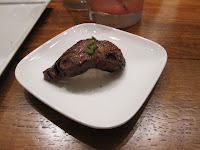 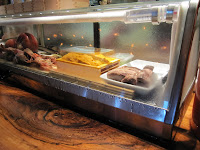 I saw this beef tongue on their sushi list so I had to give it a go, simply delicious and tender. Took a picture of the case. 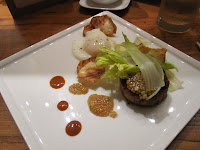 My final two dishes. I had to get the ninjin bacon, a grilled pork belly over a carrot puree (the sweet carrots with the granulated pecan/olive dust help cut the amazingly delicious butter like pork belly. I ended the night with a usagi yaki, seared rabbit confit with a slow-poached egg. The egg was heavenly and I had to ask the chef whether it was cooked sous vide (no way you can get that perfect even texture doing otherwise), he confirmed they used the technique. Had I not had this before I would never have guessed but holding the egg at the perfect temp you have a poached egg where the yolk is a perfect custard with no hint of clumping.