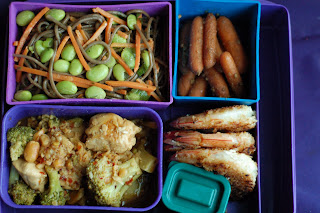 So short post today, it's been tough with all the travel to make food for my folks. The one good thing about travel is that I take the time to catch up on my food magazines and try to get some inspiration for my bentos. For today's creation I found a magazine that focused on recipe makeovers, or taking stuff that tastes great but is bad for you and turning them into something healthy. I took the challenge a bit further and tried pairing together recipes so that I could make even further cuts in the calories and fat department. Without further ado Lunch time!

I start us off with a Kung Pao style chicken breast. The authors used chicken breast instead of the usually cheaper chicken thighs and went with a lighter version of sauce. Not much variation for me here. I like that they substituted fat with a lot of flavor in the form of a more fragrant and sauce thanks to the sesame oil and heavy dose of ginger.

Instead of going with the traditional rice as a starch, I picked up this recipe for a Soba Noodle with Edamame and Citrus Vinaigrette. I halved the Vinaigrette to let it be the "rice" for the chicken. Originally this was meant as a main with shrimp as the protein, cutting the shrimp gave me another 400 some odd calories to work against, the portioning size of the obentec container did the rest.

I found this great side for grilled five spice carrots, instead I kept the marinade and turned it into more of a glaze. The flavorful marinade was something I couldn't just wash down the drain. I'm sure the flame grilled outside taste would have given it a more smoky component but I wasn't willing to sweat it out with my grill to make this side dish happen.

For soup, I went with the Spicy Coconut vegetable soup, again it asked for shrimp as a protein, but I readjusted the recipe and saved some calories by going with some bamboo shoots instead. To my pleasant surprise this is very close to a indonesian soup I've been trying to replicate for some time. The new findings will give me something to work with, but I'll lean on the opinion of one of my diners to tell me how close (we've been on the hunt together for years on the recipe for this soup.)

Finally, I end lunch with a Spicy Coconut Shrimp with Naga pepper Mango sauce. The original called for habenero, but my eaters have a good tolerance for heat, so I used a bit of the naga pepper sauce I had on hand to put a few more heat levels to the sauce. I should have used the blendtec for a better smother sauce. I'm still working on my plating design :)

I'm glad to be back in the kitchen if only for one or two bentos. I hope to churn out one more before my European trip. I did take this Kimchee class this weekend that I'll post about later.