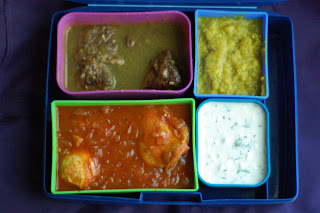 So once upon a time, many years ago I asked a friend for a food challenge. I was in the full swing of my life goal of cooking as many cuisines from appetizer to dessert to learn as much as I can about food. Austin, at the time was still more of a college town and food had not exploded to be what it is today. My friend said, "fine Ethiopian food" my response, "well that's not fair, we don't even have an Ethiopian restaurant for me to try the cuisine." him, "you asked for a challenge, and my favorite place in Houston is an Ethiopian restaurant". I wasn't really willing to drive out to Houston so I set to the web. I studied countless recipes and poured over every description I could find and created the tastes in my head. Did I pass? An enthusiastic yes. This turns out to be my favorite cuisine to cook, and I think it was because of the surprise complexity of the cuisine as well as the amount of research I had to do to get there. Anyway, I'm very happy to finally get a chance to do this box, my previous audience was not amenable towards Ethiopian food.

Ok we'll start off with our main entree. Doro Wat is one of the classic dishes you'll find at any Ethiopian restaurant (we now have three in Austin). The base for this dish is onions, lots and lots of onions, it brings a sweetness to the stew, but the real kick is the berbere. I was dismayed at how difficult it was to obtain the spice mix I would have thought it easier to find these days. I resorted to putting the spicy pepper seasoning together and toasting it myself. Basically you put together the base and then stew chicken and hard boiled eggs together for a very hearty stew. It's usually a bit thicker than what I have pictured and that's due to the amount of butter used, I opted to lighten this box up as much as possible so I'll have to live with the thinner sauce.

Next dish is Alicha, it's slow cooked meats usually lamb or goat (I went with Sirloin Chuck shoulder as suggested by my butcher) in a nice flavorful curry. The amount of spices used really gave a really tasty "gravy" to the meat and my butcher was completely spot on in his recommendation for the cut of meat. I think the only thing I did wrong this time around was the sheer volume I was cooking (12 boxes this time) hosed me over so the sauce didn't get a chance to evaporate down as much as I would have liked. That's the beauty of cooking for 6-8 most recipes scale for that size in the same cooking vessels you'd normally use. Double that quantity and instead of caramelizing onions you're steaming them, or instead of a skillet you're using a pot which produces very different results.

For our first side Misr Allecha, it's very reminiscent of a Indian Dal. This is a very simple dish cook some lentils throw in some turmeric for color and add good amount of fresh green peppers (I used Serrano peppers). The relative "blandness" of this dish works well against the flavor explosion of the previous two dishes. I think one of the surprising things about Ethiopian cuisine is how heavy it is. I didn't really have any experience with the food those many years ago, but my thoughts were similar to the reactions I got when I told folks I was going to do Ethiopian bento "what an empty box?". A rather ignorant remark, but it does say a lot about our assumptions of the region which can be a bit unfair. I hope my work will change a few minds.

Finally we have Iab, usually it's made from a local farmers cheese. It's usually served with the meal as a last course, to help quell some of the spicy food. I've also read it to be eaten with food spicy foods to help cut the effects. Just a small layer of it in the injera and grab whatever you're eating. Ethiopean food is generally eaten with your hands using injera. Injera is a spongy, stretchy crepe that has a sourdough-like taste. In my first trials on Ethiopian food I tried four different methods and although some had the texture, none had the color, texture, and taste described. Real injera takes about three days to make and I wasn't feeling quite so ambitious. Now that we have Ethiopian restaurants I simply went down and bought some.

This was actually a delightful easy box to put together. I think it would have gone even faster had I chose not to double my audience for this week. I just had so many people respond, the first set of empty spots were full within the first minute of me sending my email. I also had a bunch of new people sign up as alternates, I decided I had to open another set of slots. Hopefully they enjoy!
Box Contents:

Carl said…
There is an Ethiopean restaurant in Pflugerville off of Grand Avenue Parkway. I have not tried it, but could be worth an adventure.
August 17, 2010 at 8:10 AM

Ironjack said…
Actually we now have a total of three in the area. The one you mentioned, Aster's at I35 and Dean Keaton, and one on the East Side. I can for sure say that Aster's is awesome! Still need to try the rest.
August 17, 2010 at 8:47 PM

Optimista said…
OMG, I am DROOLING! This looks positively amazing. I wish every time you post that I could get in on this bento deal!

Also, Taste of Ethiopia (the place in Pflugerville) is head and shoulders above Aster's. Karibu on the east side is somewhere in between the two.
August 18, 2010 at 12:00 PM

Ironjack said…
@Optimista All you gotta do is become my coworker :)

I'll have to check out Taste of Ethiopia, many people have been telling me how great this place is.