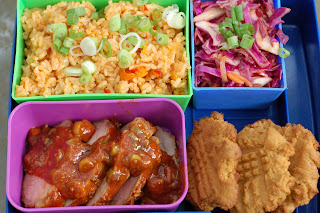 Ok today's bento was brought to you by the fine folks at Heinz. I was sitting in a meeting and saw a little ketchup packet that proclaimed, "The worlds best meatloaf". I thought to myself, "that's a bold claim my little friend" which lead me to this link containing a small archive of Heinz ketchup based recipes. Flipping through various links, I was fairly impressed with what all was being made with ketchup and when I landed on the peanut butter cookies (yes made with ketchup) I knew I had to build a box around it. Not much in the way of tweaking this time around (only a bit in the soup) I didn't want any mishaps to be blamed on my tweaking, let the ketchup shine through!

Ok I was going to go into a case between Catsup, Ketchup and the origins of both in terms of word and sauce. This appears to be very diffcult to ascertain and give correct information. There's various citations on the spelling of Ketchup (catsup, catchup) by 16th and 17th century writers and the origins of the sauce are murkey with a strong leaning towards Chinese origins . Here's what we do know, the modern Ketchup is made with tomatos, tomatoes being a New World plant could not have been introduced until somewhere around the 1590s (depending on who you talk to). So the modern day sauce is not some ancient recipe, but it could well have been an older sauce augmented by tomatoes. There are plenty of opinions citing a difference between something labled Ketchup and something labled Catsup. Either way as I see it, when I'm at a Fair or event and I have a hotdog I'm getting that red tangy stuff to put on it, I really don't care what you call it they generally only have one version.

We lead off with an Asian inspired marinated pork tenderloin. As always pork tenderloin is probably the most flexible meat out there, it will fit any sort of theme and you can marinate it and dress it however you like. There was a slight difference in preparation I noticed in their instructions 350F for 20 mins (or 145F internal temp) then broil. Typically, I sear the outside first to lock in the moisture and then put it in the oven. First, 20 mins I knew would not be enough, it's probably closer to 40 at that temperature. Second, I was concerned that the broiling process to produce the crust would bring the ideal temperature up beyond what I normally would consider optimal (if you consider resting after that). The recipe as stated brought the final temperature up to 160F. I felt the pork came out ok, but not the way I like it. There was no appreciable crust, and although the pork came out tender, it's not quite what I would have liked especially knowing that my bentoers are going to reheat it. Flavor? Well the marinade was pretty good and the recipe called for boiling down the marinade and topping the pork as a sauce. The ginger really came out and added a great flavor component to the dish.

First side was a Fried Rice with rainbow peppers. Growing up, one of my favorite dishes my mom would make would be a simple fried rice stir fried with a bit of ketchup. This version is more complex and has a great deal more moisture. The ketchup sauce featured ginger garlic and lime juice. I like this version although I of course prefer mom's version. I think next time, I'll use rice that's a day old in the fridge the rice would be a bit drier to absorb all the moisture. This is a nice recipe that allows for quick upgrades in protein to make into a meal, just add some roasted chicken, ham, or sausage and it's easily upgraded from "side" status to "entree" status.

Once again I pulled out the slaw, which is always a love hate with folks. Usually I'm able to convert some slaw haters with my versions, I tend not to like the heavy mayo based opting for vinegar based cole slaw so this version was up my alley. I loved the colors in this red cabbage slaw the addition of the purple onion to hid amongst the cabbage gave the dish a nice spicey bite to it and took a bit away from the cabbage-y flavor. Hopefully everyone else will agree. The dressing was more akin to a light bbq sauce, using mustard, ketchup, and vinegar as their main components. All in all very tasty.

For our soup today I put together this Manhattan Clam Chowder, I decided to combine chopped clams with whole baby clams to give some more body to the soup, besides, I happen to have both on hand. I'm a New England chowder guy myself, and although this version is no doubt healthier since it lacks all the cream and butter, I still like the taste and flavors of the New England version. The ketchup came through a bit strong on this one, I would have opted for less sweet taste. If you use a flat tomato juice base you can tweak up the flavors individually by not going with ketchup. I'll have to ask how the soup went over.

Finally for dessert, I whipped up these "Tic Tac Toe" peanut butter cookies. This was a big surprise to actually incorporate ketchup into cookies. It was interesting to me that the batter/dough was quite light and fluffy, I attributed that to the vinegar/tomato acids interacting with the baking soda. The cookie was light fluffy where I normally would expect a dense chewy texture for a peanut butter cookie. All of the folks at work that got the extras were pretty surprised at the use of ketchup as part of the dough.

World's best meatloaf? I'll have to save that for another time, but I'm definitely happy with the lunch menu today and it was fairly easy to turn out not bad for a five courser. I'll have a brief intermission next week as it's my birthday, but I'll try to put up one of the posts that I've been saving. Until then, thanks for coming by!

Unknown said…
Happy Birthday next week! I've been reading your blog for a few years now, and always enjoy reading what you make. :D
May 13, 2010 at 6:34 PM

Ironjack said…
@Mel Hey Thanks for reading! Always great to know folks actually see this stuff. Have a great weekend!
May 14, 2010 at 9:07 AM

It was nice meeting you last night at dinner. Hope to see you again soon! And second, I *really* want to try the peanut butter cookies with ketchup. Will probably do so tomorrow.
May 15, 2010 at 2:17 PM