Foodblogger Event: The Trailer at Gibson 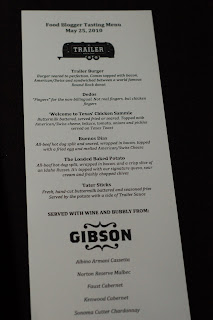 I was invited to The Trailer at Gibson, an unassuming bar located on south Lamar. I didn't really know what to expect, was it another trailer restaurant? was it a bar? Anyhow, I was very happy to get a chance to see my food blogger friends. As always it was a pleasure to chat and catchup on their latest culinary adventures or new hotspots that they've uncovered.

Ok, so a bit of explanation let's clear up the confusion. Gibson is the actual bar it's got a cool vibe, going for that NY neighborhood dive bar (kinda nice for a dive bar). Dark interior with some outside seating. The windows face lamar so you can go in for a quick happy hour and wait out traffic. Now The Trailer, is actually a trailer on the side of the bar that serves all the food for the bar. They just opened it during SXSW and have been open full on for six weeks. So to answer my question, it's both trailer and bar and I think it works.

Our hosts tonight were Shag (pictured above) and Jourdan a couple of the owners of "The Trailer". They were a lot of fun and very engaging. The were all about the food and really welcoming. So a word about what you're about to read or rather a word from Shag: "We're show casing some of our staples on our menu. After about six weeks this is what most people are ordering regularly." And yes, this is some decadent food, I think a choice quote was, "Wow, that is so freaking good, can someone call an ambulance I think I'm about to have a heart attack". But the thing is, you can't help but chomp down every bite, it was delicious. Now before you health nuts put the big X on trying this out, they have a full menu that includes lighter fare such as hummus, edamame, and a bevy of sandwiches and salads that will sit well for you too.

Onward with the orgy of badness. We'll start out with two of the appetizers. Dedos and the Tater Sticks. The chicken was very tender and the batter of the Tater Sticks were very tasty. It's a strange texture, it felt like eating crispy battered mashed potatoes it's a great texture contrast. The king here was the Mustard dip for the Chicken, it was Cousin Leroy's mustard sauce. Cousin Leroy is going to launch his own brand of sauces so I'm looking forward to that. The mustard was really tasty, it had that awesome zing and sweetness but more bold than what I normally encounter with a honey mustard taste

On to the sandwich and burger. First we have the "Welcome to Texas Chicken Sammie", a tasty treat, again a moist and tender fried chicken, the pickles were a nice addition to kick it off as different than your average chicken sandwich. The "Trailer burger" was the heart attack on a plate. It features a burger with cheese and bacon but for a bun you have a Round Rock donut split in half and pressed. Wow, so good, the sweetness of the donut totally was a great complement to the salty bacon.

We finish up with two dogs. The first one was the "Buenos Dias" a hot dog wrapped in bacon fried and topped with cheese and a fried egg. Who can hate a fried egg? It was very tasty but my favorite of the night was the "Loaded Baked Potato" hotdog. Again with the bacon wrapped dog this time with with potato strips and a sour cream sauce. It had the right combo that said "mmm. loaded baked potato, hey there's a hot dog there"
Thanks to the folks at Gibson bar for having me over I really enjoyed it and have earmarked the place for happy hour. As always great seeing my friends.
chicken event hot dog