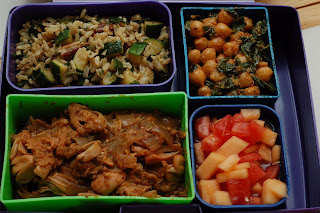 Today's lunch is a collection of vegetarian items that I've had in my notebooks that I had been meaning to try. It just so happens that they all had a Latino flair to them so today's "Vegimex"/ "LatinoVeggie" theme happened to fall in my lap. This is actually a fairly low calorie/low fat, gluten free lunch . As with most vegetarian dishes, there's a lot of interesting flavors and spices used to make up for a lot of the flavors that animal fat and protein bring to the table. Also, there's a lot of attempts to bring meat like texture (some successful, some not so successful), probably to help out the new vegetarians with the transition. I've always been perplexed of this mock tofu duck breast that was sold at a buddist monastery, is not eating a fake duck in spirit the same? It seems like it's a question of intent to me. Anyhow I'm sure I'll get some flame in the comment for saying that. Let's get on with the description.

First up, Jackfruit Carnitas. This has made it's way across the internet and originally made famous by an LA restaurant called Pure Luck. It's a really simple recipe that calls for using jack fruit and throwing a bunch of stuff in a slow cooker for eight hours. Visually speaking it did look a lot like meat, but texturally I think it lacked a bit of substance. It's a tasty taco to be sure, lots of flavors come from the huge list of spices and the tomatillos. It's almost necessary to have the tortilla to bring some balance to the amount of flavors going on. The jackfruit itself didn't have much in the way of base flavor which is why this works so well, after the dish was complete the jackfruit had a texture of soft bamboo shoots. I won't completely discard the recipe, but I think the use of either tofu sheets or some combination of tofu would have fixed the texture problem.

For a bit of filling we have a Herbed Zucchini Coriander Rice. The zucchini was slightly under cooked with a healthy dose of ground cumin and coriander, to give a crispness and bunch of flavor. Mixed in with the zucchini were a bunch of parsley, cilantro and some brown texmati rice. The addition of some toasted pecans was a nice treat that rounded out all the flavors in the dish. I really liked this dish and I think it'll go well in any picnic basket. Again keeping in theme of light and healthy this dish was flavorful, crisp, and light. I think the only addition I might make would be some fresh chopped roma tomatoes mixed in the end both for texture and a touch of acidity.

Espinacas con garbanzos or Garbanzo beans with spinach is the next dish added to the bento. The garbanzo beans add a nice heavier feel to the lunch which hopefully will prove to satisfy a feeling of fullness for my diners. Again lots of latin spices were added to this. I precooked the spinach and tossed it in at the end with the beans but I think the better way would have been to cook them down with the beans. The spinach tended to clump up in the dish and proved to be difficult to "toss" together. The flavors and spices reminded me of a Chana Masala and definitely made this dish very tasty since it had so much going on.

I definitely didn't want anyone to feel hungry so I put in this Spicy Cauliflower Soup. Cooked down some onions and carrots and added a modest list of spices and a bunch of cauliflower. The cayenne actually provided a decent kick to the soup and it took me by surprise. I felt a little bad because my past two bentos have been challenging my eaters heat tolerance, at least this one wasn't blazingly hot. Anyhow, the flavors were wonderful and despite it's creamy heavy look, the soup was actually pretty light.

For dessert I wanted to stay on the light side: Cantaloupe and Watermelon marinated in Triple Sec and Tequila. Basically it's a margarita with fruit, I believe I can thank Rachel Ray for this little number. Fruit's a great way to satisfy the sweet tooth without dipping to far into the bad meter by indulging in dessert. I tried to hold back on the tequila since there was no cooking off the alcohol.

Amazingly, despite having five dishes this week I was done in record time. Next week we'll finally get to test out my Sous Vide Supreme on that three day short rib recipe I've been eyeballing since I bought the device.

Nicole Kreiling said…
Absolutely devine! Andy and I shared this for dinner tonight. You are such a talent! The flavors were fantastic. Everything was to die for. I love how all the flavors of each dish complimented the next—perfectly seasoned! The healthy and gluten free factor didn't hurt! Thank you!!!!! I want the recipes! nkreiling@gmail.com
April 20, 2010 at 8:42 PM