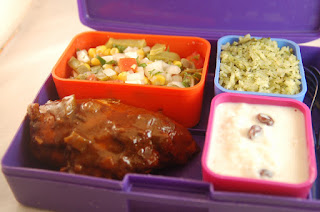 My wife and I were having lunch last weekend and she had commented on not knowing much about the food of interior Mexico, things like differences between a Mole and Adobo sauces etc. That, I was able to answer, but I figured this would be an opportune time to look up and understand some of the foods you don't see in our heavily Tex-Mex laden city. This one is actually slightly not 100% gluten free (there was a bit of wheat in the pre-packaged mole) had I done this from scratch the whole meal would have indeed been gluten free.

First we start off with a Mole Poblano de Pollo, or Chicken in Mole sauce. For those of you that haven't had Mole, when folks here say Mole they specifically mean Mole Poblano (there are several types of Mole sauce most do not contain chocolate). Mole sauce has a complex rich smokey sweet flavor from the various dried peppers, nuts and of course chocolate. The process of making a proper mole sauce takes hours. I unfortuneatly do not have that much time so went with a store "concentrate" that I thinned out with chicken stock and layered in some flavor via some green pepper and onion. The results were still very tasty. Amazingly easy dish to put together, I simply seared some chicken breast, pulled them out and dumped in the veggies sauted till soft deglaze and put the Mole sauce and chicken together and dumped it in the oven.

For a salad I put together this Nopalito Salad. The ingredient list is pretty much just anything that I had on hand with a jar of Nopalito (cactus) and chopped queso fresca. I'm not sure if this was just because it was jarred nopalitos or if this is true for fresh I found they had a nice salty taste that made this dish really pre-seasoned and I only needed a bit of red wine vinegar to round it all out. Very fresh light and good for you. If you've ever had chinese pickled cucumber, nopalito is a similar texture (jarred).

Next we have arroz verde, green rice. This was an interesting dish for me to whip up. I've never cooked rice with milk and not have it be a dessert. The green is provided by cilantro and spinach and the flavors were wonderful, the milk added this hint of richness without resorting to butter. I like this one a lot and will be tagging it heavily for use at a potluck or something.

For a soup we have Sopa Albondigas. It's a meatball soup that I lightened up by using turkey instead of beef and chorizo. This is one of those soups that eats like a meal, 3 meatballs would go a long ways towards filling you up. Delicious! the cumin, oregano and cinnamon were an amazing treo that makes this simple looking soup taste great! The meatballs themselves were easy to put together and by substituting the meat makes them fairly healthy.

To finish off why not some more rice: Arroz Con Leche, Rice pudding. I had to score a mini bag of rice (I don't usually use long grain white rice) and this helped me use the rest up. Here I lightened things up by using some Splenda and Truvia (I find the combination to work well instead of all one or the other). I could have thickened things up using some condensed milk, but I favored healthy rather than rich and used some tapioca flour to get some added thickening.


My adventure into culinary interior Mexico was a lot of fun. Learned a lot of new was to use rice and it was fairly easy bento to put together. Look for a post from me about another food blogger event I was invited to over at Fino! Until then happy eating

coffee and queso said…
Whaaa?! I'm so impressed you pull this all together for $6 a box (is that right?)

Where do you find your recipes for those dishes you don't just pull together organically? I historically have done a lot of western European cooking or just simple healthy/vegatarian cooking, but I'm interested in learning more Latin flavors and Mexican traditions. LMK if you have any recommendations!

Ironjack said…
yup the budget is $6. Sometimes I dance under which allows other lunches to go over a bit.

The recipes come from everywhere, food network, magazines, other blogs, and I'm usually fussy enough to change them to my tastes or cut corners to make things healthier. Most of the time, on very specific themes, I pull lots of recipes and fuse them together to make the best of all worlds. I'm happy to share any of the recipes you find on the website. (I keep and catalog all my recipes even my inventions) Usually there will be a request in the comments and I'll post a reply with the recipe.

I had a great time meeting you at Fino it's so much fun meeting and talking to fellow foodies. I really need to blog about the event as it's still fresh in my memory.

Anonymous said…
I recently came accross your blog and have been reading along. I thought I would leave my first comment. I dont know what to say except that I have enjoyed reading. Nice blog. I will keep visiting this blog very often.