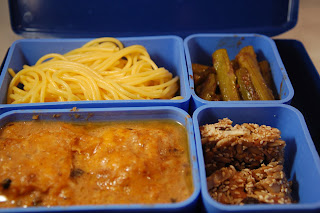 Welcome back readers! 2009 starts out with a proper challenge for me. The household has decided to try out a gluten free diet for the next two months. This extends far out of my bento territory as now I'm preparing building blocks for a whole weeks worth of food. So for those that aren't in the know on the gluten free thing, I'll write up a bit after the food post to explain some of the reasons why we moved to gluten free and why it's suppose to be good for you. So all that said, gluten free doesn't necessarily mean healthy. You can be gluten free and still eat like a pig, so my original challenge still stands of building a healthy bento for my eaters under budget, but with the added constraint of it being gluten free. So you might be asking what is gluten free? Well in a small nutshell, no wheat products (it's more complex than that, but just go with me on this one) This type of change is a lifestyle change, we basically re-bought our pantry and had to become more diligent on label reading (did you know soy sauce is not gluten free!) I had to start off in a hurry and picked up a gluten for dummies book. I think the recipes here have a little to be desired for, e.g. the chicken although tasty, I think I would have done differently. That said they probably had a different crowd in mind for the book, either way I'm going to have to learn to adapt. Well let's get started shall we?

First up, I have a cheesy easy chicken. I think this was meant to be more cassarole like but it ended up being more like a braised chicken. It's pretty tasty, I think I next time I'll add more herbs to punch up the flavor. It was slow baked in the oven but for some reason the chicken didn't seem to pick up the flavor. I purchased some "corn" pasta which tasted very very close to normal wheat based spaghetti pasta. I'm encouraged that moving into gluten free won't mean giving up too much. The dish overall should be pretty yummy.

Next we roasted up some asparagus and then dressed it with a viniagrette. Very yummy, I used a grain mustard hear to give the dish some texture. The idea here is once you roast the asparagus you finish it off in a viniagrette back under the oven. The result is a very flavorful dish.

It's been cold here lately, and I had to make a soup. Working within calorie constraints I made a delightful vegetable soup. I was a bit worried when I started that all of the vegetables seemed to sit above the liquids but after a few hours of cooking the veggies finally cooked down, I think we could have used a bit more liquid as well as seasoning (I think I'd add a bit of cinnamon and a touch of cumin to improve the taste). The shear volume of healthy vegetables here really make this a powerhouse of healthy.

Finally dessert. My wife has a bit of a sweet tooth, so I made a batch of this nutty trail mix hoping that it would provide enough of the "sweet" component that she didn't feel like she was giving up too much on this gluten free diet. I got to break out the candy thermometer again to test for "soft ball" consistency with my sugars. The end result is actually a very yummy (albeit calorie laden) dessert.

Ok so, now that I've described the bento. For those that are still following, why gluten free? Well gluten free diets have been shown to be successful in helping with certain conditions among them: autism, digestive problems, migraines, nutrition absorbtion, hormonal imbalance, the list really goes forever. Whether or not gluten free fixes this, well my jury is still out however, it's worth a shot. I know a friend that put his child, who was mildly autistic, on the diet and has seen wonders occur. The idea here is that we as humans were not made to digest wheat, we don't have the luxury of 4 stomachs like cows do. In fact, the undigested parts of wheat wreak havoc on our digestive systems. There have been studies of how more primative cultures did not contract modern diseases (diabetes, heart risks etc) until refined wheat was introduced by the modern world. Alternative studies show that gluten acts much like drugs on certain younger children and actually perpetuates cycles of bad development in young children. Believe me, I've read up on as much as I could in one weeks worth of time, I think there might be something to follow here, sure some of it might be speculation. Is this propoganda true? I don't know, I'm simply a humble cook trying to experiment and keep the family healthy. So if that means I get to learn to bake without flour and cook around constraints, then I take it as a challenge as cook and hopefully it'll be an adventure you'll enjoy reading about as I try to tackle it.

Julie said…
Interesting read....I know you'll find lots of resources out there to help you. My son has autism, and though we've never followed the GFCF diet, I've heard quite a few success stories. Good luck!
January 11, 2009 at 9:43 PM

Ironjack said…
Hey thanks for the encouragement. I was really surprised at careful we had to be on reading labels that and asking questions at the restaurants we went out to this weekend. Fortunately for us there are several restaurants here that actually carry a gluten free menu.
January 12, 2009 at 11:06 AM