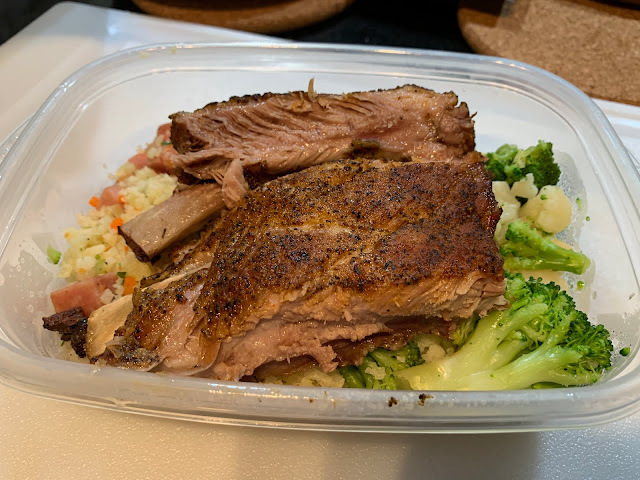 I gave in about a year ago on an instant pot. I know, I'm late to the game but, it certainly is a life changer for me. I've been traveling a whole lot as a consultant over the past 18 months and it didn't leave me much time for cooking (or posting) but I did find the convenience significant. And as a vegan at the beginning of that time there were lots and lots of dishes that the instant pot helped save significant amounts of time. I've since been allowed to return to regular meat eating which opened up a huge catalogue of things to cook. The one dish that I had been eyeing was ribs.

Ok I'm going to be completely up front and honest here. The ribs were only a partial success and I'm going to explain it right now up front. The ribs were incredibly tender but my approach lacked a lot of flavor and that's because of a couple of mistakes. 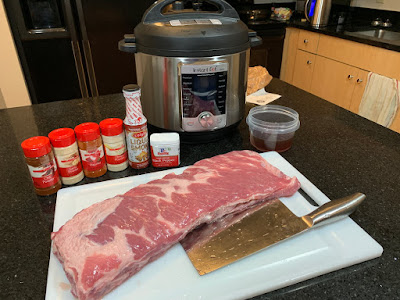 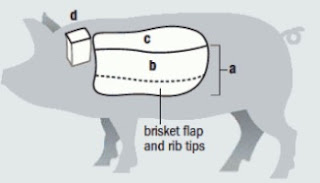 A quick education on ribs everyone has their own thing. There are 4 cuts of ribs you usually find in the grocery store. There's the country style rib which is not really a rib, but a shoulder loin cut. Then there's the baby back ribs. Those are cut from near the loin near the top of the pig. Then you have the spare rib which is the bottom half of the rib that goes down to the belly. Those are the big meaty ones with the cartilage (soft bone) at the top. If you cut off the soft bone tip and are left with just the meat and rib bone, that is called St. Louis style ribs. (I stole this image off google, I can't find the credit for the illustration. ) 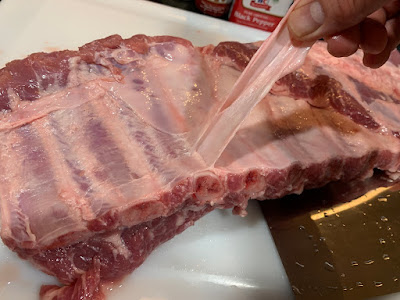 So I chose St Louis style rib mainly because I wasn't convinced the spare rib would fit in the cooker. But this would still give my preferred meaty pork rib. (I'm not a fan of the leaner baby back rib). Either way with any rib, you need to trim the inside silver skin, if you don't this layer becomes very tough and really wreaks the ribs later. 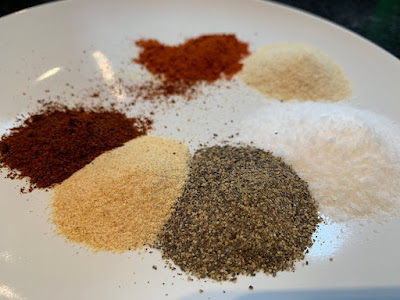 For spices I went with Salt, Pepper, Chili powder, Garlic powder, Onion Powder. Remember add more salt and or salt it again before you put it into the oven. 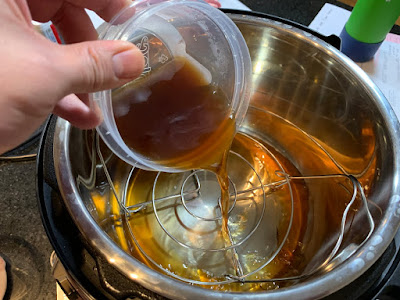 I went with a cup of beef broth (the instant pot requires that you have a minimum amount of liquid for pressure to be attained. 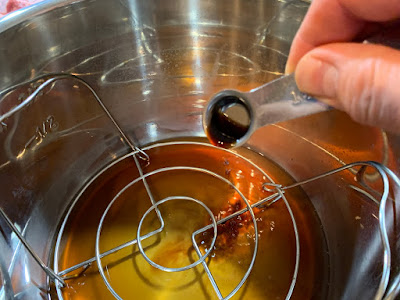 I added liquid smoke. (I should have either rubbed into into the ribs or tried to use more (or both) 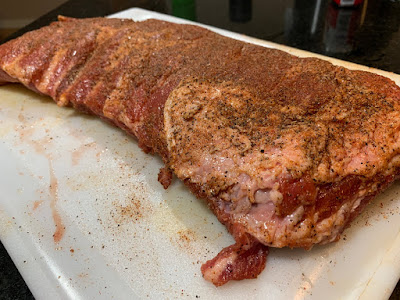 Cover every bit of those ribs with spices. Maybe some cumin next time too. 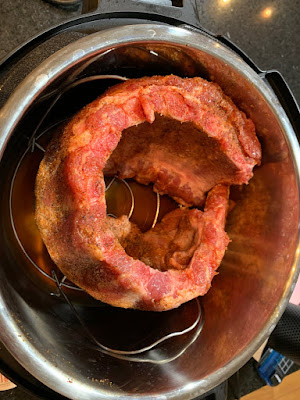 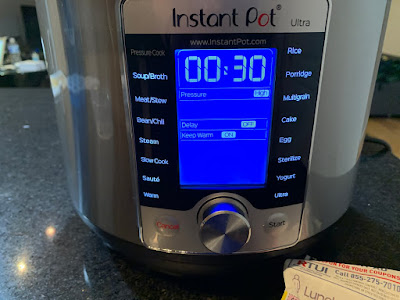 Set up for 30 mins. I gave it a 10 min wait afterwards before releasing out the steam 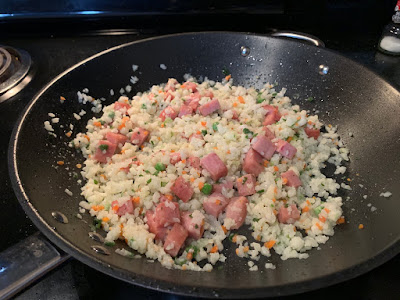 While I waited. I stir fried some cauliflower rice with some cubed spam. This turned out to be quite a nice combo. I was going for a low carb version of spam fried rice, and could not have been happier. Next time I'll dice the spam smaller. 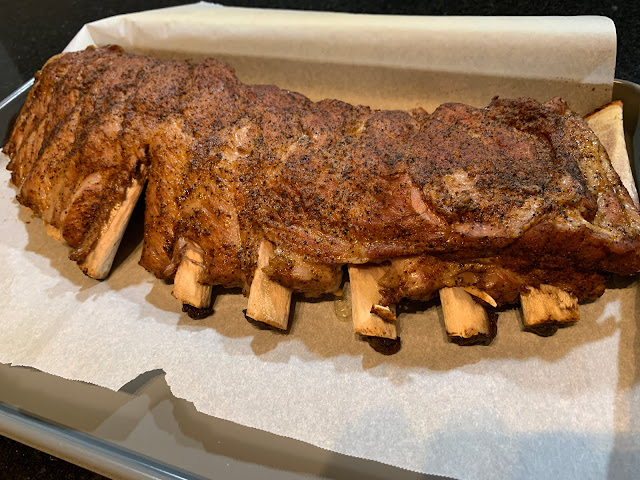 Ok once the ribs were ready I popped them in the oven. This is the point you would have glazed it first. But I broiled them for about 3-5 mins (checking on the how done you wanted them.) You can see how fall off the bone tender they were. 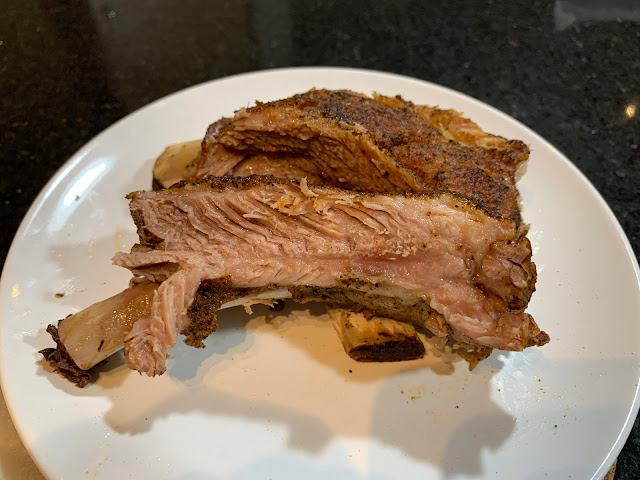 And there you have it. Ribs out of the instant pot. It was truly a painless preparation. I'm as always amazed by this device. Are these going to result in BBQ joint quality ribs? No. But considering I'm cooking this in a small condo away from my main kitchen with all my gadgets and smokers etc. It's pretty darn good. Below is what I will use in my recipe for next time adjusting for seasoning.

Trim the ribs and remove the silver skin on the back of the ribs.

Mix together all of the "rub" ingredients. Cover the ribs front and back in the rub. Once done sprinkle on the liquid smoke directly on to the ribs smooth over the surface of the ribs.

In the instant pot inner pot put in the rack at the bottom and add the beef broth. Curl the ribs with the rib "back" facing the center and stand it on top of the rack.

Close the lid and set for high pressure for 30 mins. Once complete let it depressurize naturally for 10 mins before manually releasing.

Pre heat the oven on hi broiler while you're waiting.

Remove the ribs from the cooker and place on a baking tray lined with parchment paper. Apply bbq sauce on the surface of the ribs as a glaze. And broil the ribs for 3-5 mins (checking frequently) and remove when the ribs achieve the desired color.