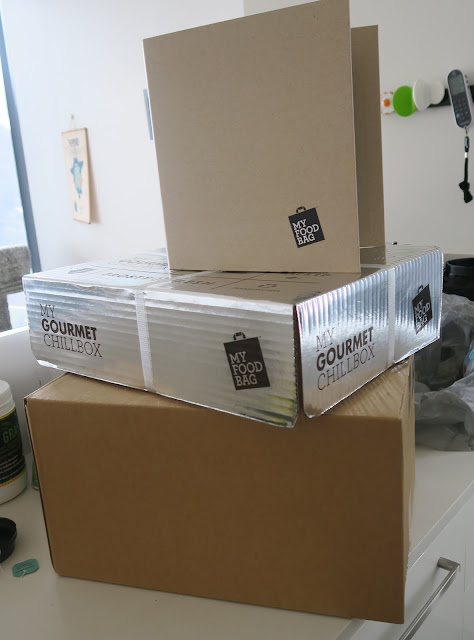 So, a friend of mine had a free week to give away for me to try out My Food Bag. They are in both Australia and New Zealand I know there are similar services in the US.

The high level idea is that they deliver a box (or boxes) of groceries that have been pre-portioned and partially prepped with a series of recipes. It saves you a trip to the grocery store and simplifies meal preparation which is nice after a hard day at work. I really love the process, you pick your box type: classic, family, gourmet, or own (single diner) on the website, and they send you a mail and follow up text on when they will delivery and it just shows up. You get another email during the week to let you know the recipes so you can read through and buy any staples you might be out of. This box is four meals for two people (the different boxes feed different amounts).

Disclaimer: this was provided free for me, but no one asked me to post anything, it's just my honest impression of the service.

As you can see I got two boxes. The first box was a "chill" box which contained all the cold goods packed with a reusable ice block, if you're not home they'll stash the box somewhere out of the way so the ice bag helps keep your meats and perishables intact until you're able to get to your goods.

Picture of the second 'non chill' box. As you can see, stuff is portioned out for cooking. Some of the ingredients are more than you need for the recipes, some are used for multiple recipes. There are some staple items that they expect you to have on hand. It's denoted in the recipe legend. Spices are pre-measured and bagged as well as any sauces or marinades, super handy! 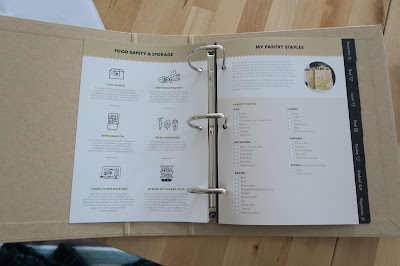 For the first delivery they also give you this great little binder to collect all the recipes you cook. It contains a brief overview of the service, staples you should be stocking. They even talk about food safety. This is a nice touch, we've tried other services and the cards are all over the place. 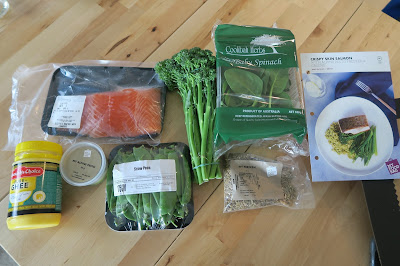 So what are the recipes like? Well, as soon as I got the box it was nearly lunch time so I broke out the first recipe: Crispy Skin Salmon with Alpine Pesto Freekeh and Greens. I gathered the simple ingredients (I had to supply butter/ghee) and below are literally the six steps I followed to getting lunch done. (OK I lied, the broccolini needed to be cut into three segments but that's the only pre-prep other than washing stuff. 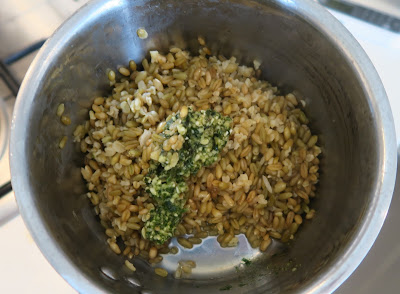 1) Boil the freekeh for 20 mins. when it's done drain and mix in the pesto 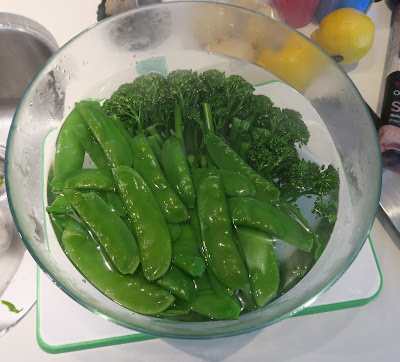 2) while the freekeh is going cover the snow peas and broccolini in boiling water from the kettle. 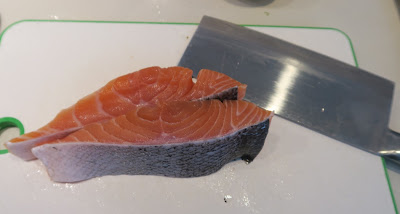 3) clean the salmon and cut it in two pieces 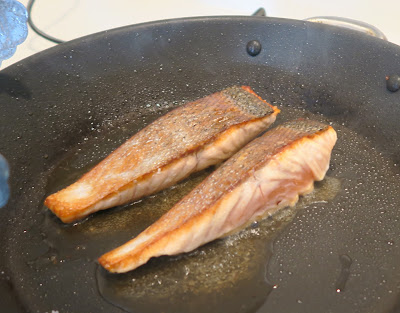 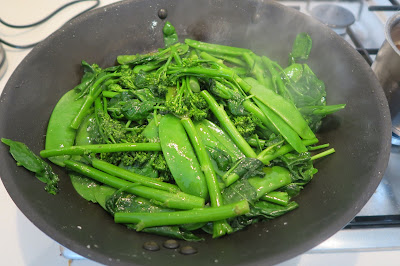 5 and 6) (melting butter is not an exciting picture) wipe off pan, melt butter saute the snowpeas broccolini and spinach. I deviated here and used the "full punnet" since the spinach wasn't being used anywhere else. I made the mistake of using all of the snow peas I didn't notice the icon that it was being used in another recipe. 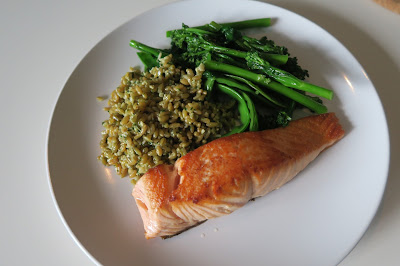 It was as easy as It sounds. The recipe card said 25 mins cooking time. I seriously doubt it took me that long.

I really like the convenience of the service. The folks at My Food Bag take you through the entire service. The produce was fresh and well packaged. Living in Sydney, I’ve learned the value of groceries being delivered. I was very accustomed to living back home where I could pile just about anything I wanted into my car and drive it back. When you have to carry everything home you start getting pretty picky about what you buy and stock at the house. Having everything basically prepped and ready for you was a huge benefit as well, it made cooking a breeze. The “Missus” even found it pleasant to cook so it was nice that it helped her enjoy cooking.

My only wishes would be:
Some of the ingredients say thing like 1/2 a punnet of XYZ. (punnet is a tray, or container) It would be nice to have an actual weight measurement. I realize you're cooking from their service, but I think the point of giving us the recipe cards is that we might want to re-create the meal one day even if it's not in "my food bag" for the week. It'd be nice to know how much half a punnet of spinach was because the it didn't seem like a standard size of spinach (100 grams) since the grocery sells it in bags (350grams). Not a big deal since I just wrote my own notes on the card just a nitpick.

The other thing is, since we’re trying to live a low carb lifestyle I kind of wish they had that type of option for a bag but I understand that it creates another variation and complexity to their service. That said each recipe is created with “healthy” in mind and they even list the nutritional facts.

Would I recommend the service? Absolutely! Would I personally continue the service? I definitely think I would, we’d have to reconcile the low carb thing. The price of the bag I picked (the gourmet) was $140 AUD (Australian dollar). I think it’s worth the price if you divide it out it’s cheaper than going out to eat About $17.38 per person. There were other bags that brought the dinner price down to $6.36. Can you do better shopping for yourself? Sure, but the price of convenience and prep goes a long way. We try our best to cook for the week but with both of us working it’s tough so cooking becomes a production and spending time in the grocery store cuts down on our weekend time so we either burn time or go out to eat.

accommodation search engine said…
This comment has been removed by a blog administrator.
December 8, 2017 at 11:17 PM

aaronnssd said…
Excellent work. This post about Food Bag that you have shared is attractive. Really, I was searching for these types of blogs. Thank you for sharing this blog. Mylar Pouches For Store Retailers
November 4, 2020 at 11:55 PM

driplocbaggies said…
This comment has been removed by a blog administrator.
January 20, 2021 at 6:38 AM