Microwave and Mugs: brunch in a box 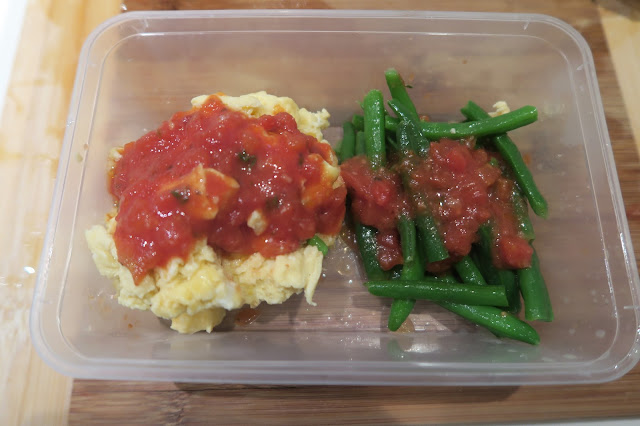 So this paleo/gluten-free friendly mug bread has been making the rounds on facebook recently. Mug/microwave cooking has been around for a bit but people have gotten pretty creative over the years. I mentioned that I should created a bento box out of mug items made in a microwave. Since it's a rainy crappy day outside I decided to play in the kitchen.

The microwave is a surprisingly versatile piece of equipment. I usually use it to reheat items (never to my satisfaction). There's some debate what the nuke box does to nutrients, some say it preserves them, other say they get nuked to death. All the supporting scientifically measured evidence I've read seems to support the former. Anyhow, that's not the subject of this post, the challenge: make a bento box around items you make in a mug and a microwave.

I settled on brunch because it's probably the easiest thing to do because eggs are easy and most every other recipe out there sort of dessert or cake so brunch is the closest thing I could use to compose a meal. I already had a bread so I figured on some sort of "golden arches" type breakfast muffin with an accompaniment. I'll admit I cheated and used a ramekin because it has a wider mouth and allowed for better pictures, it's just a large handleless mug. 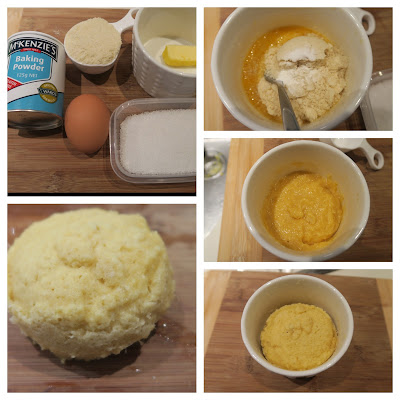 First up I had to test the english muffin. All of these recipes were pretty simple. Ingredients: 1/4 cup almond flour, 1/8 tsp baking powder, 1 egg, 1 tbsp butter, and a pinch of salt. I nuked the butter for 30 seconds in the microwave and stirred the butter until it was fully melted. I then tipped the mug on it's side and coated the edges. Stir in the ingredients and mixed until incorporated. Set the microwave for 90 seconds on full power and let it go.

The resulting bread was pretty dry, not exactly like an english muffin, but it had air pockets and was pretty springy.  It's definitely a gluten free bread. As one of my friends pointed it looked like  the insta-bread that Rey made in the new Star Wars movie. 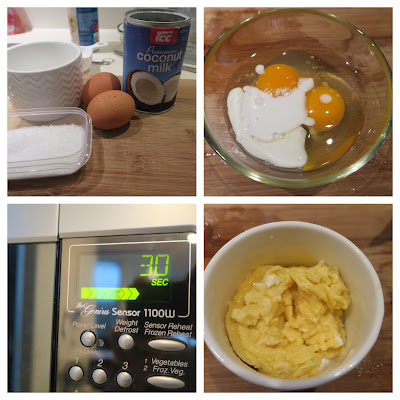 Ok bread: check. Best thing to do with this thing was some sort of egg type muffin. And the easiest was a scrambled egg. I didn't have any milk on hand but I did have some coconut milk since we're doing the paleo thing. Ingredients: 2 eggs, 2 tbsp coconut milk, a pinch of salt. I sprayed the mug with cooking spray and whisked everything together and put it in the mug. I set the microwave to 70% power and nuked it in 30 second increments stirring along the way. After the third trip the egg was as you see in the photo, still a little runny but the carryover heat from the mug and egg let it set nicely. The eggs were well cooked and still soft. Beware overcooking, they become tough and rubbery if you nuke them too long. 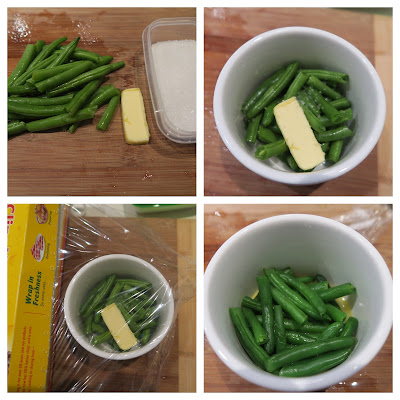 Now for a side. Veggies are the easiest thing to prepare in a microwave. Many super markets sell broccoli and cauliflower in a bag and you microwave them for 2 mins and they steam in their own baggies. I figured I could probably do the same thing with green beans. Ingredients: 1/2 tbsp butter (optional), pinch of salt, 1/2 cup green beans, 2 tsp water. I hand snapped the green beans to fit in the mug, dropped in the butter, pinch of salt and added a bit of water to the bottom of the mug to help with steaming. I sealed the mug with cling wrap and poked a few holes at the top and set the microwave to 90 seconds. The green beans were soft and retained their color I think 60 seconds would be fine if you still want some snap to your beans. 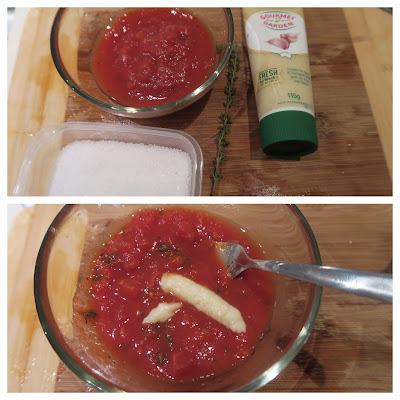 I thought the egg muffin was probably too dry on it's own. I figured a topping of a simple tomato sauce would probably spice things up a bit. I had some left over crushed tomatoes from a can, garlic in a tube (I'm not too proud of that one) and fresh thyme, so I went to work. Ingredients: 1/2 cup crushed tomato (or diced), 1 sprig of thyme, 1 tsp minced garlic, extra virgin olive oil (not pictured). If you want some dried oregano and basil would go well here too. I mixed everything up and added a splash of olive oil. I covered the mug in cling wrap and poked some holes and set the microwave to 60 seconds.  I gave it a final stir before topping. 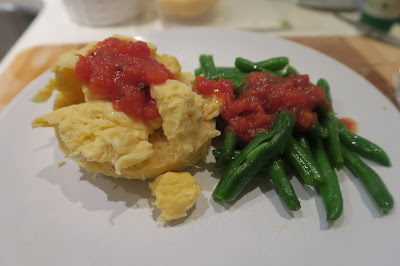 Here's the meal plated. Total cooking time: 10 mins with prep. I wouldn't call this a masterpiece but, if you have a few mins and are at the office I could see how you could make this happen. It's definitely tastier than some of the microwave breakfast items I've had from the freezer.  For the speed and convenience I'd give it a thumbs up.
brunch green beans microwave mug scrambled egg tomatoes