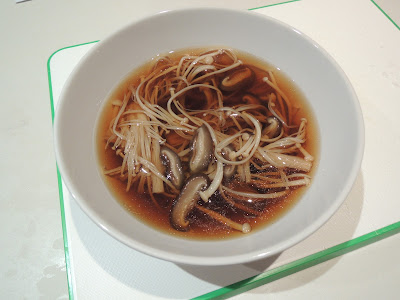 I've been craving this simple enoki mushroom soup that I had at my favorite Japanese restaurant back home so I've been on this crusade to make my own. While not quite the same, I like the version that I've managed to come up with. It's a simple recipe and although not quite a lunch time bento I've brought it in a thermos for breakfast after a brisk walk to work in the Sydney "winter" (I put that in quotes, it's so far been more like a chilly rainy fall than any winter I've experienced in Texas). 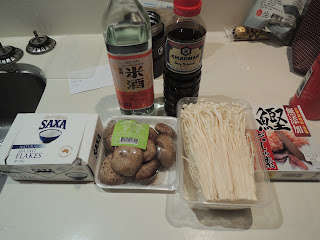 I digress. After a bit of hunting and improvising this is what I ended up with. Let's start with the ingredients. As you can see it's a pretty simple soup: I have 100g of fresh shitake mushroom, 250g enoki mushroom, Dashi broth package, Soy Sauce, Chinese Mi Jiu 米酒 (Since I didn't have Sake or Mirin, but I like this better, less of a sweetness), and salt to taste. Yup that's it! 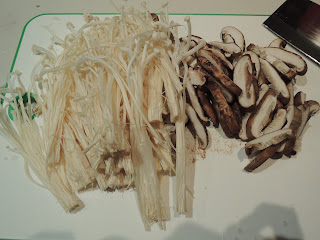 First I remove the stems from the shiitake caps and slice them thin. I also cut off the end of the enoki mushroom bunch and separate them into small 1/2 inch bunches. I know the conventional wisdom is not to wash mushrooms, but Alton Brown did a good enough job convincing me otherwise besides, they were going into the stock pot for soup so what's the harm. 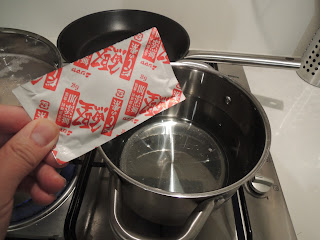 Next I heat two quarts of water and I disolved 1 packet (6 grams) of dashi granules. 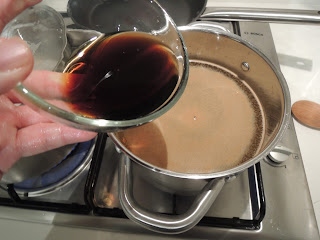 Add 2 tbsp of soy sauce and 2 tbsp of Mi Jiu and bring the broth to a boil. 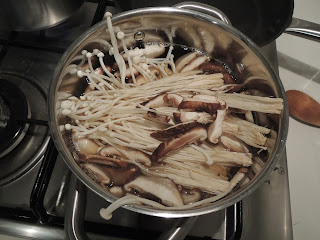 Once there I lower the heat to a simmer and drop in the mushrooms and cook for about 20 mins.  If you like some heat I would suggest adding some white pepper.

Done! Delicious and very simple. Also most stores also carry a Kombu dashi which would be a fine substitution for regular dashi if you want this to be a vegetarian/vegan soup.

Clean mushrooms, remove stem from Shiitake mushrooms and slice thinly. Cut off base of Enoki Mushroom bunch and pick off small "bunches" about 1/2 inch thick.

Heat water and add Dashi granules. Once disolved add Soy Sauce and Mi Jiu and bring to a slow boil