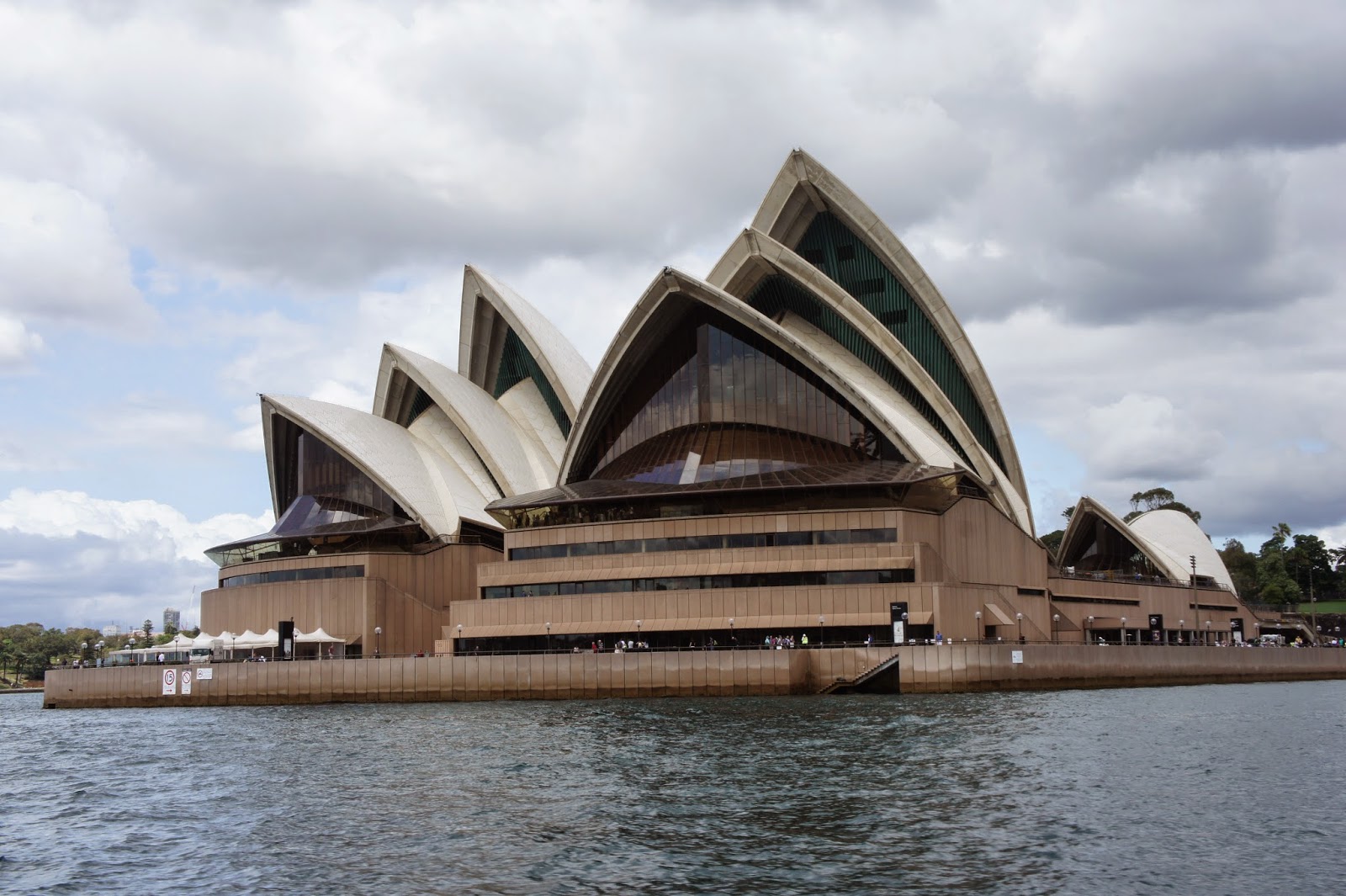 It seems that I'm doing more travel than I'm doing cooking this year. Heck, I still have a couple of posts from the last trip that I never finished. (One features a visit to a chocolate museum in Belgium) I still have a couple of cooking posts that I haven't managed to post either. I'm a bit behind.  As you can tell from the title picture we're in Sydney, Australia! This is a view from a harbor ferry of the opera house. 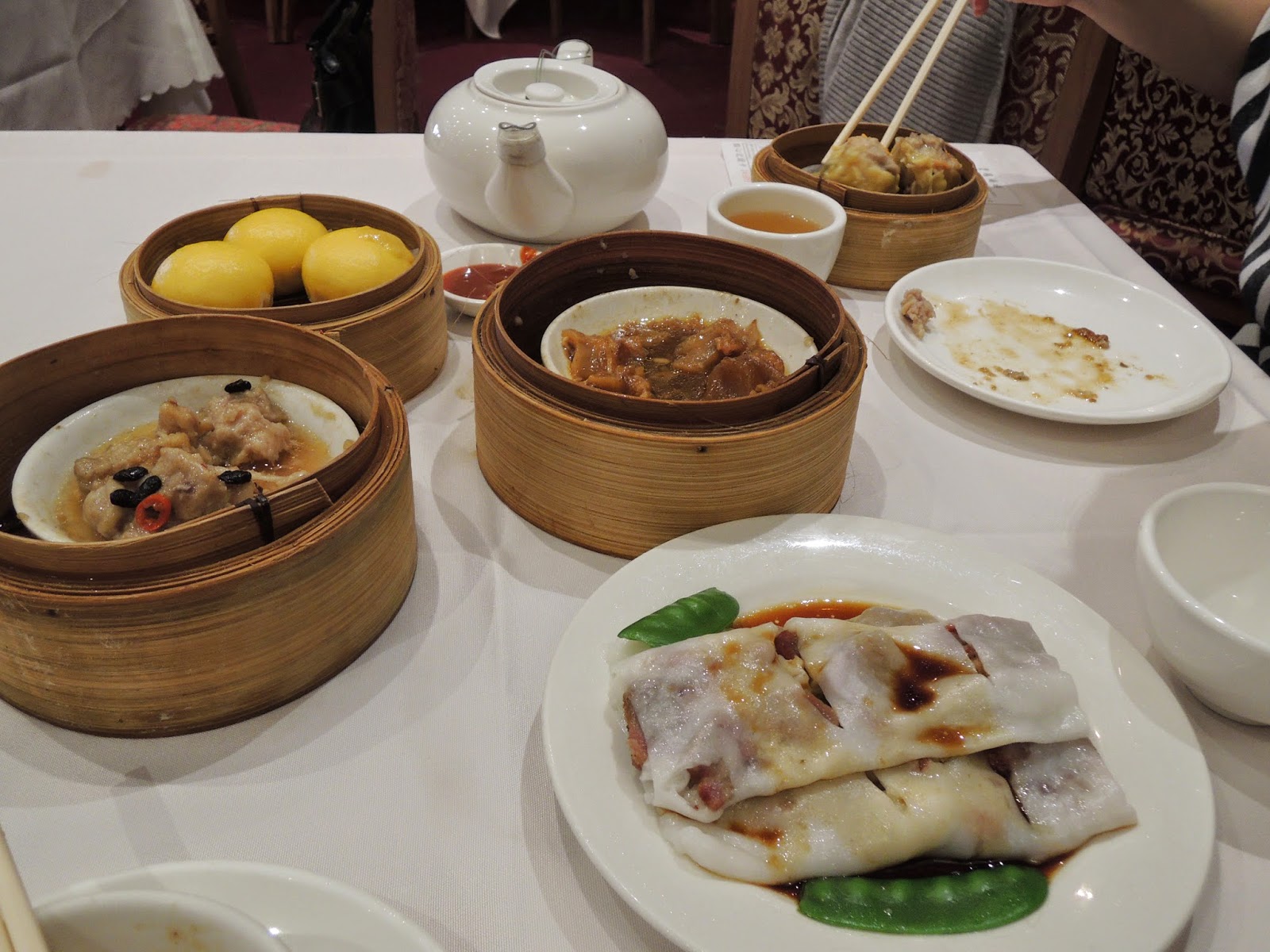 This was a two week visit but I'm going to consolidate it into one post and skipped a few of the places we ate at (I left my camera in a few instances). We landed 6 am and since we had time to kill before checking in (and had to keep ourselves awake) we walked down to Chinatown and got some Yum Cha (Dim Sum) at the Emperor's Garden. It was ok, the fact of the matter is it was the only thing open so we couldn't be too picky and since we didn't have a fridge we couldn't order a lot to check out the variety. 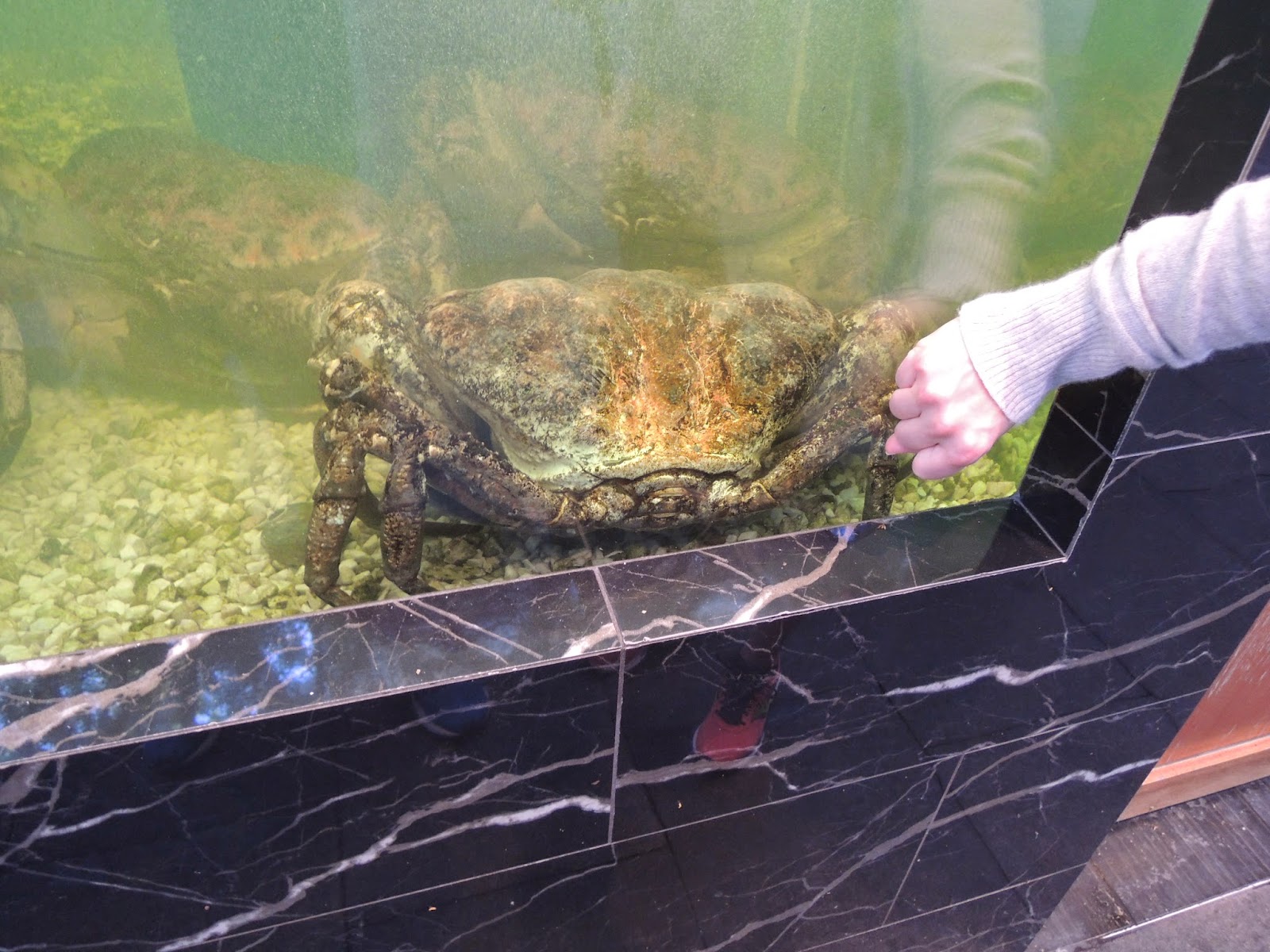 Here's a picture of a crab at another restaurant window (not open) pictured is my wife's fist to give you a sense of the enormous size. 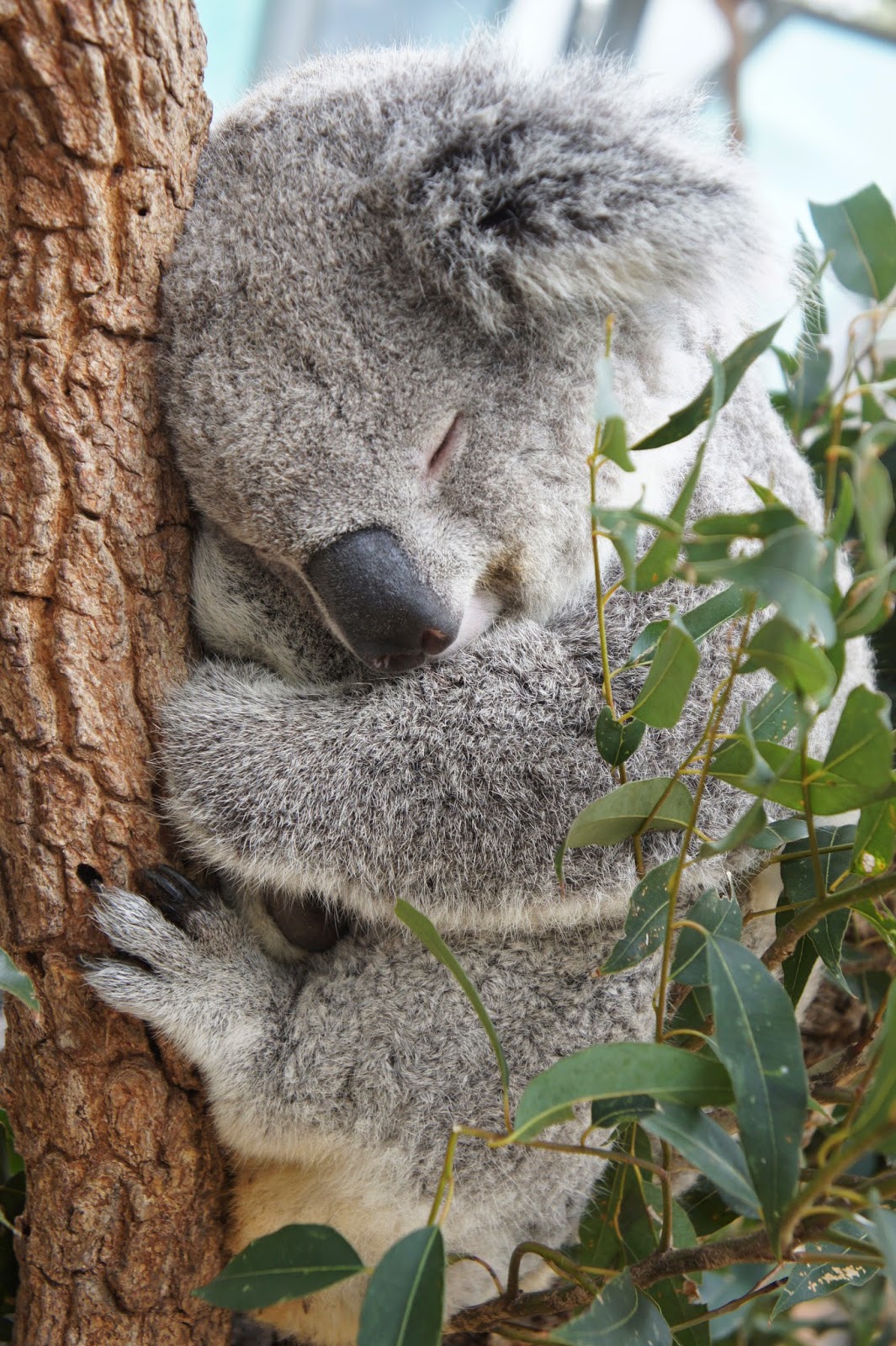 We hit the Taronga zoo and sprung for the "Koala encounter" we were allowed into the pen where the Koala's slept, no touching allowed but we did get close enough to be within inches of the cute little fuzzy ear animals.  This is a picture of the mother, I twitter posted a picture of the 1 year old baby. I have a picture of us next to the baby it was literally the size of my head. So cute. I highly recommend visiting the zoo especially the Bird show, they managed to train birds for an interactive show it was simply amazing we blew a whole day there. We had fish and chips at one of the restaurants in the zoo, nice but didn't warrant a picture. 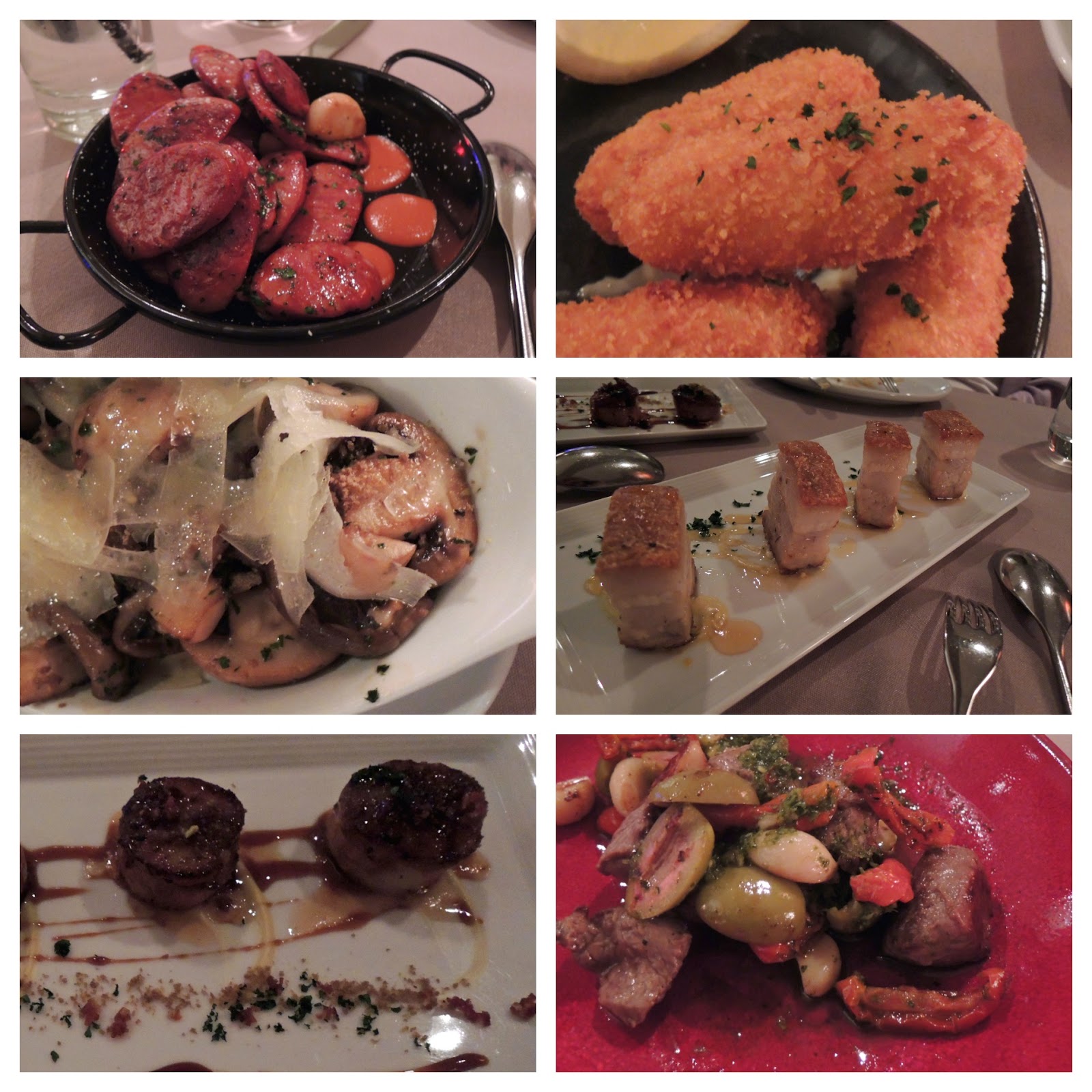 The hotel had a basement area with a Pizzeria, seafood restaurant, sushi, greek and Tapas restaurant. I hit most of them but did get pictures of what we had at the tapas bar. Featured in the picture: Grilled chorizo, salt cod croquettes, sautéed mushrooms with manchego, pork belly with honey, Pan fried scallops wrapped in Jamon serrano,  and Grilled lamb served with confit garlic and green olives.  "Pro Tip" (or don't make our mistake): if you want water like in America ask for "tap water" or get charged for an expensive bottle. 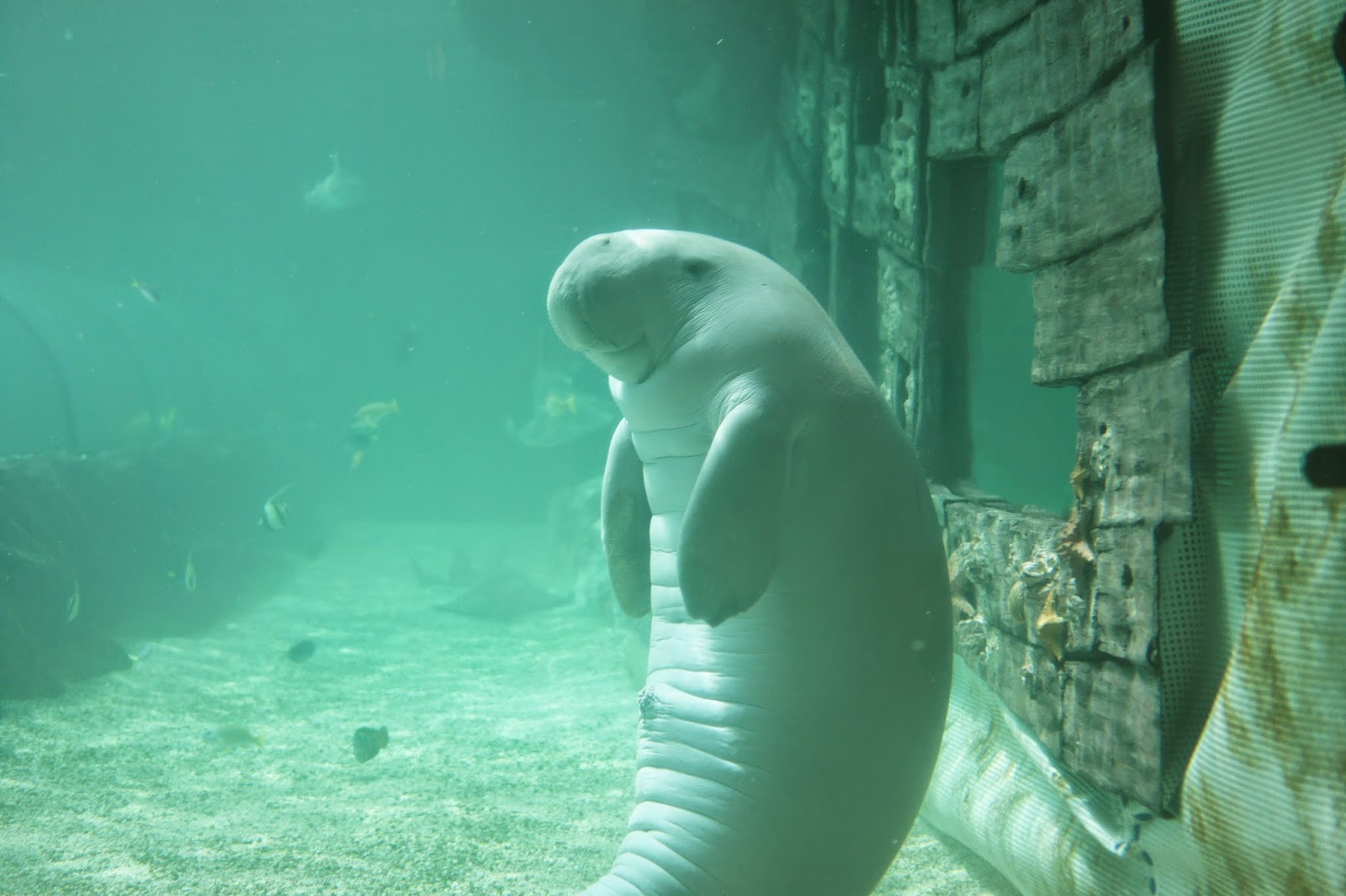 After the Zoo we figured the Aquarium would be an equally impressive place to visit. Here's a picture of a Dugong it's a relative to the American Manatee. They are highly intelligent and cute as hell. You can't resist smiling back to that face. We elected to take a behind the scenes look at the aquarium it was neat but you don't get to take pictures. 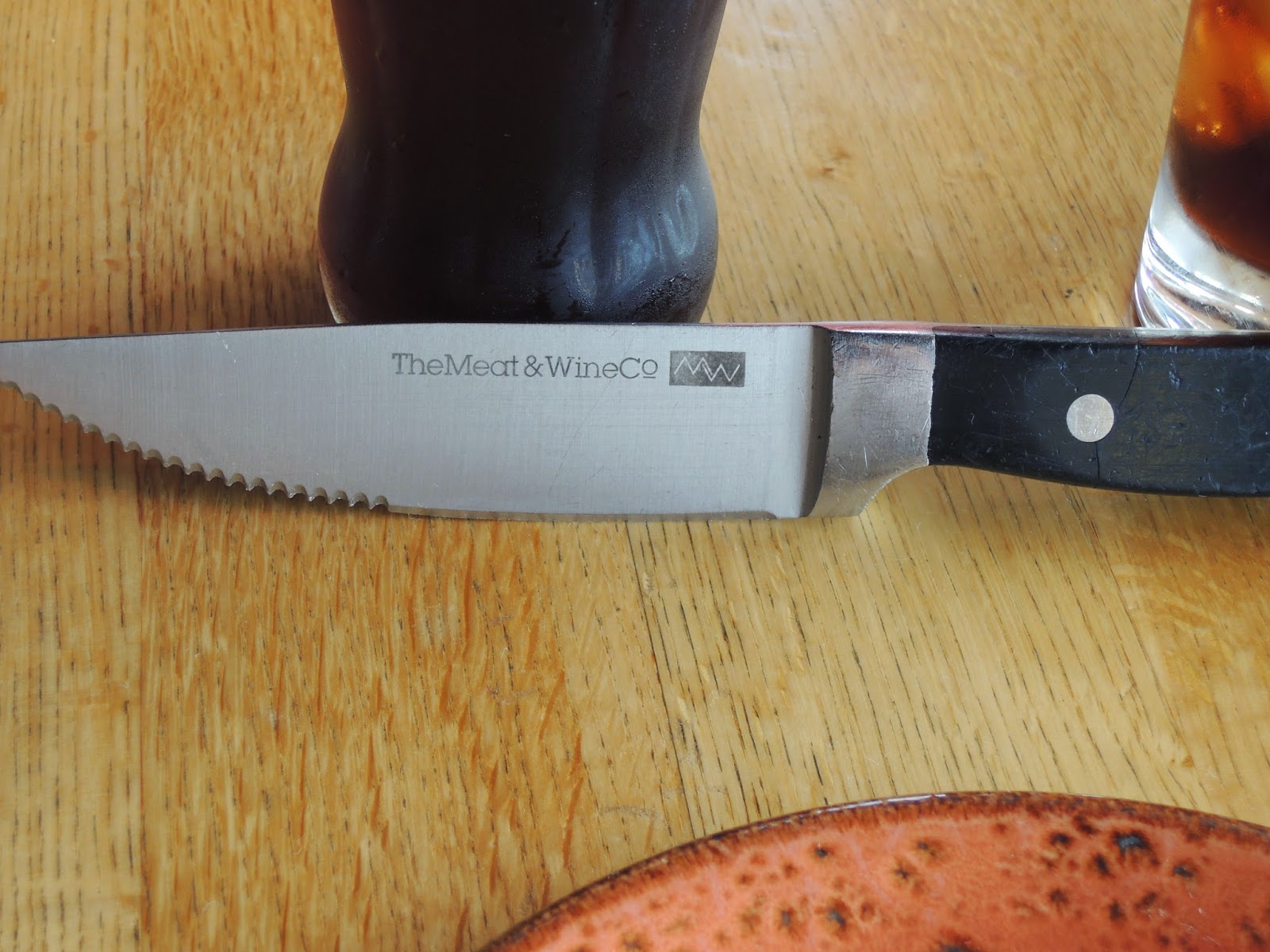 My friends suggested that I try some kangaroo so we went to Meat and Wine Company. Apparently kangaroo are much like deer at home in Texas, a cute but enuisance animal. 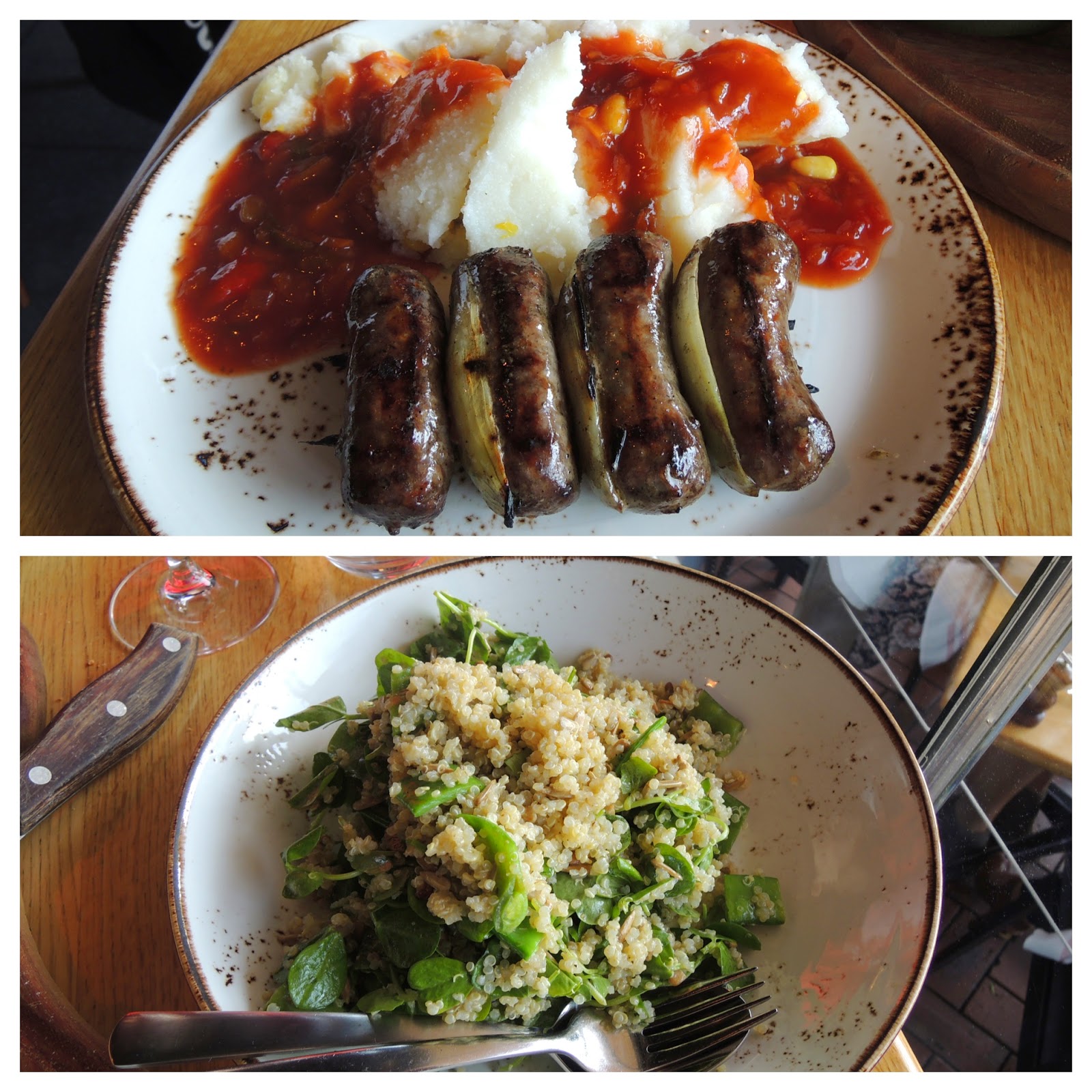 For appetizer we shared African Sausage with Mielie pop (a hominy porridge) and Quinoa and Snow Pea salad with sunflowers and white wine vinaigrette, this was delicious and something my wife asked me to replicate. 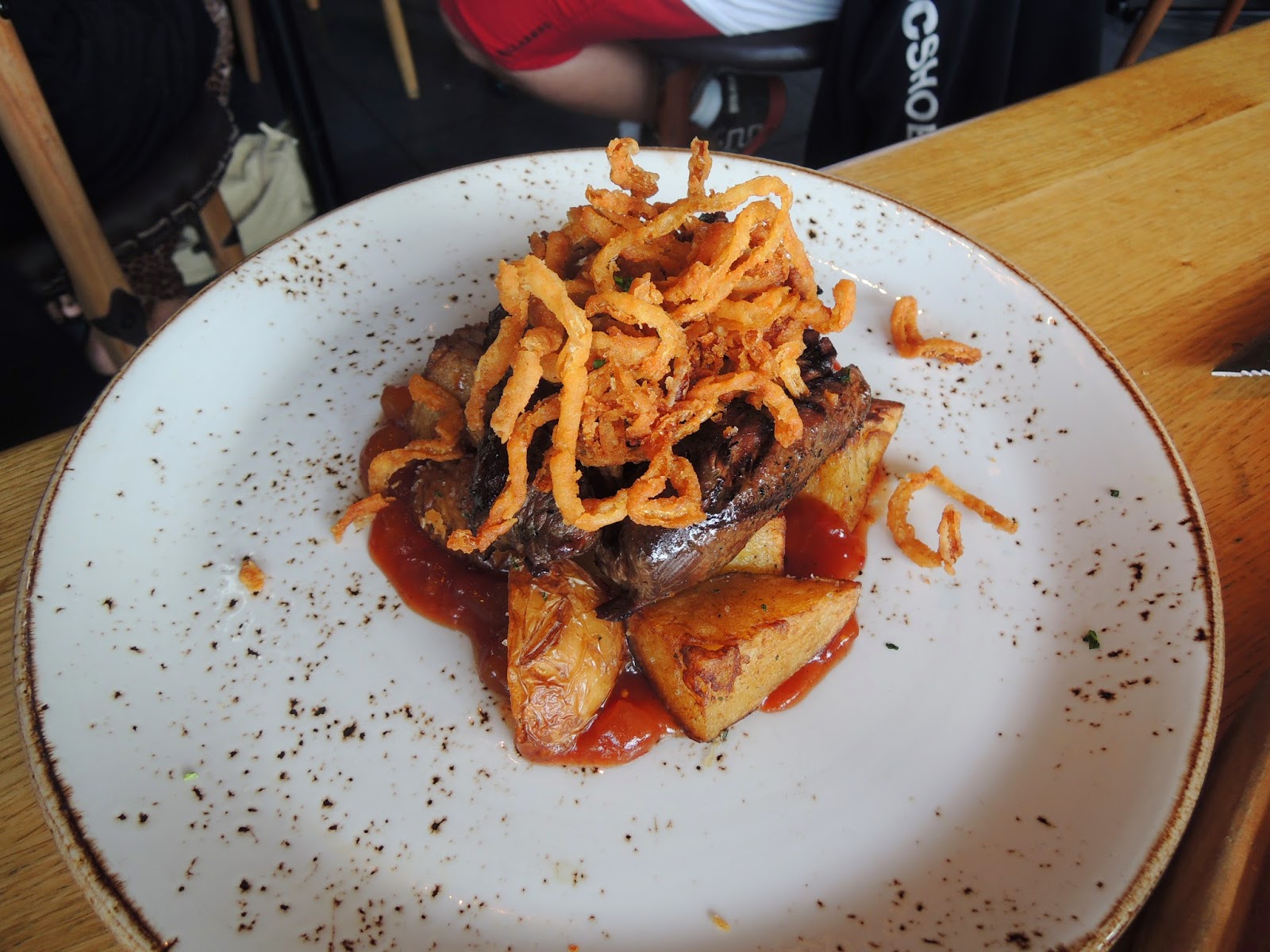 Finally the Medium Rare Kangaroo fillet. I have to say it was pretty tough and had a very iron/liver-y/gamey flavor very distinct and unique. Glad I tried it, I might have to try sous vide and different marinades and preparations. 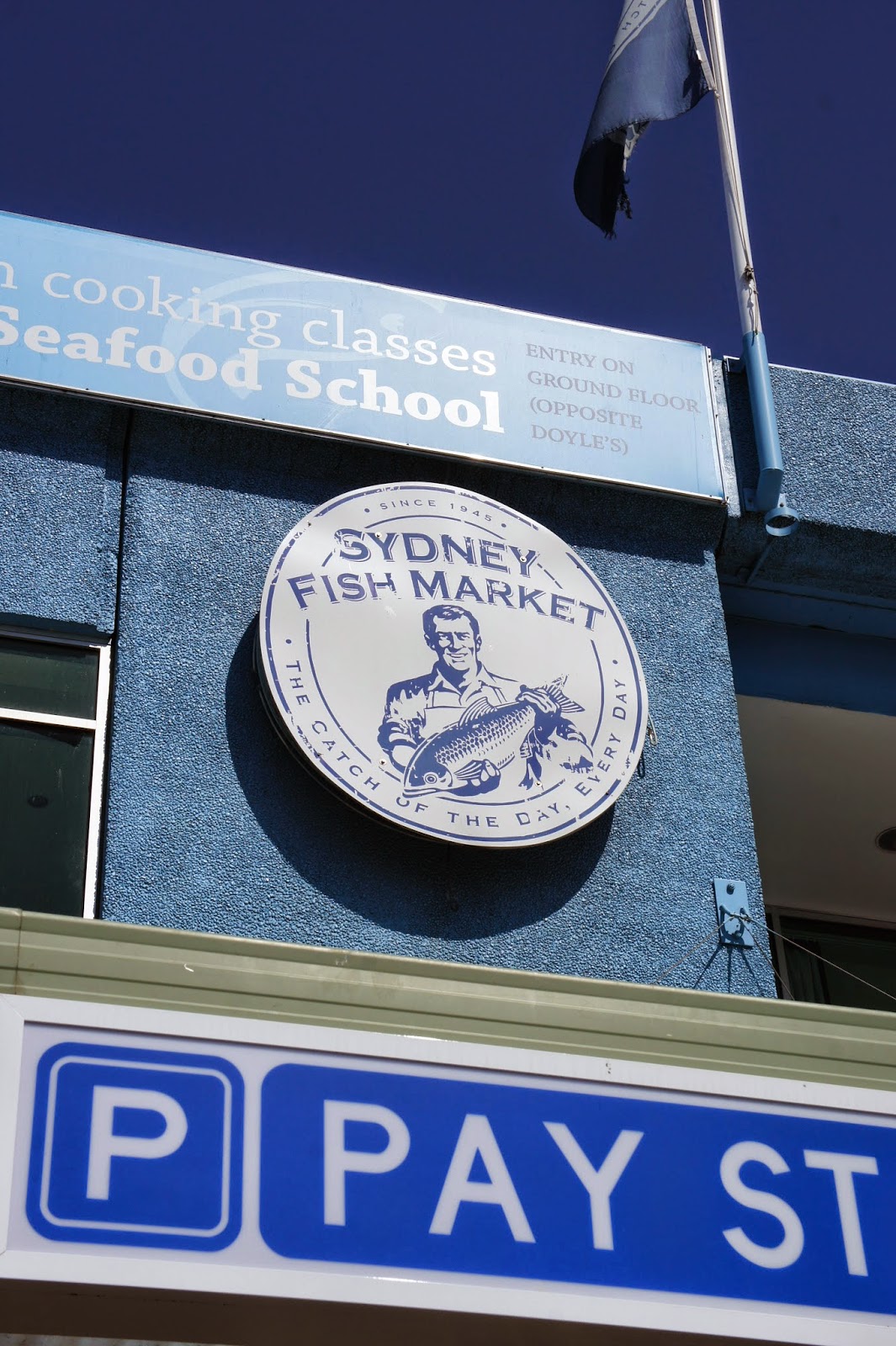 Again, off the recommendation of my friends I hit the Sydney fish market. 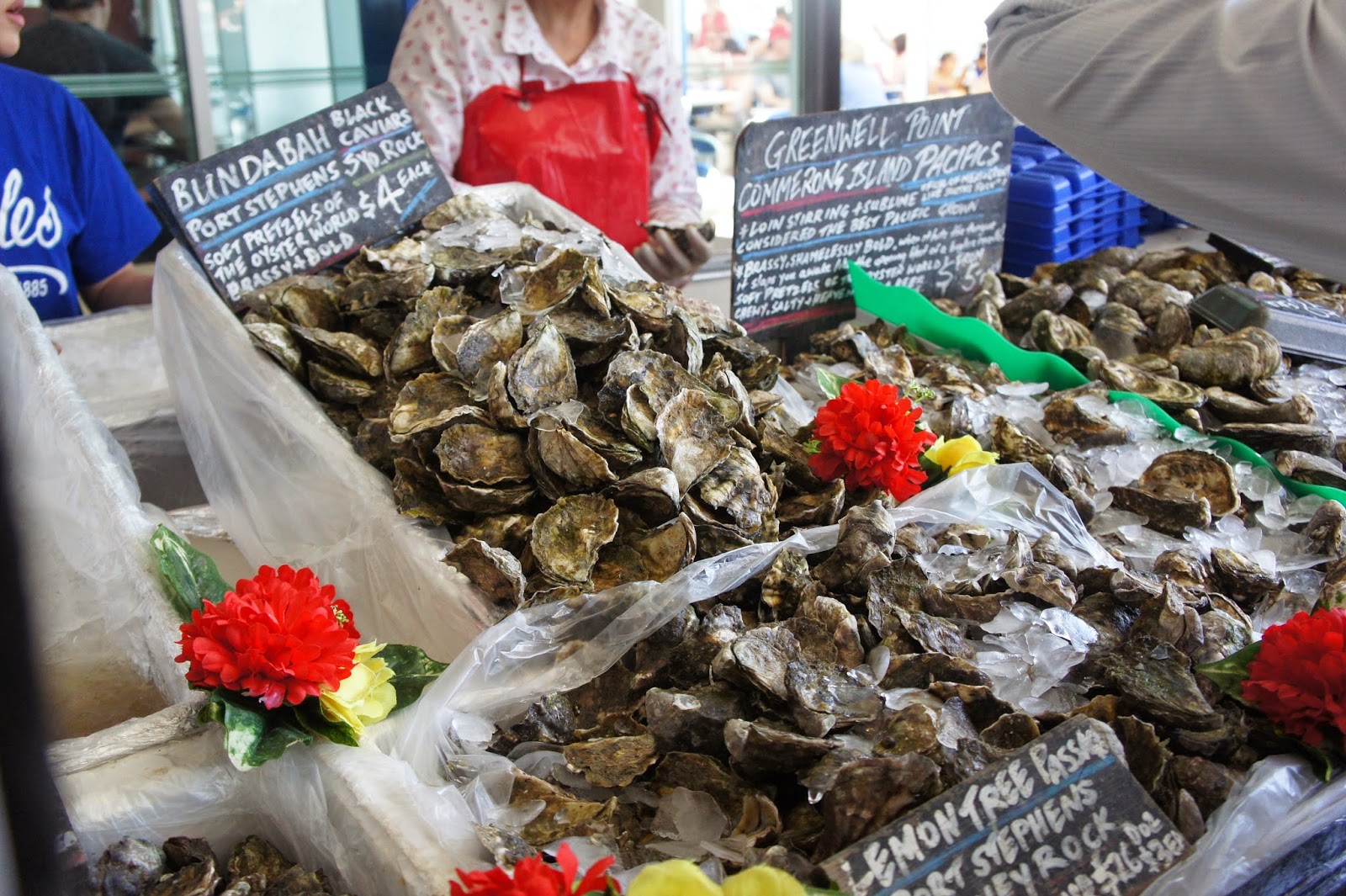 It was a bit smaller than I expected but it was chuck full of oysters. 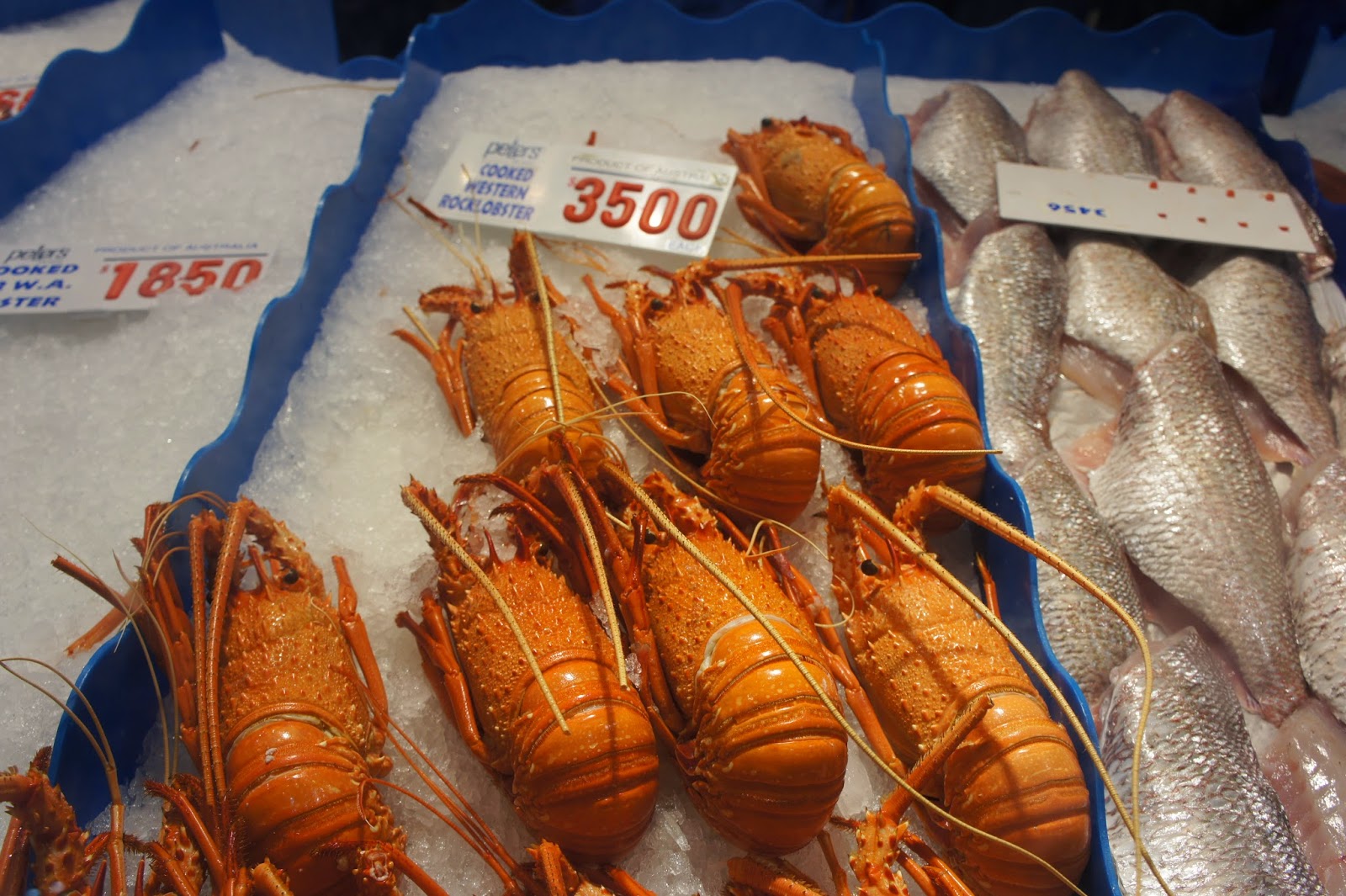 and other Amazing shell fish 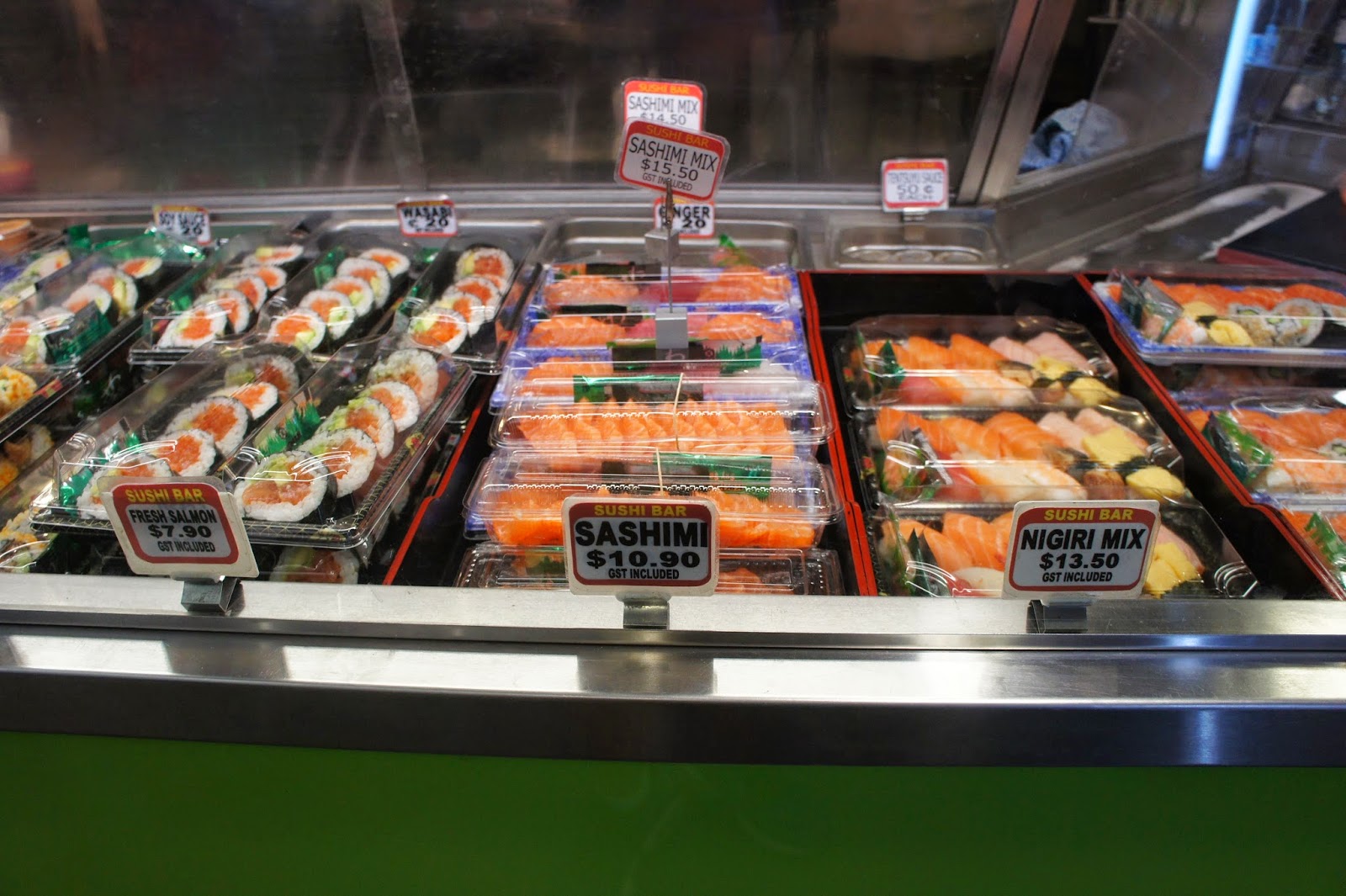 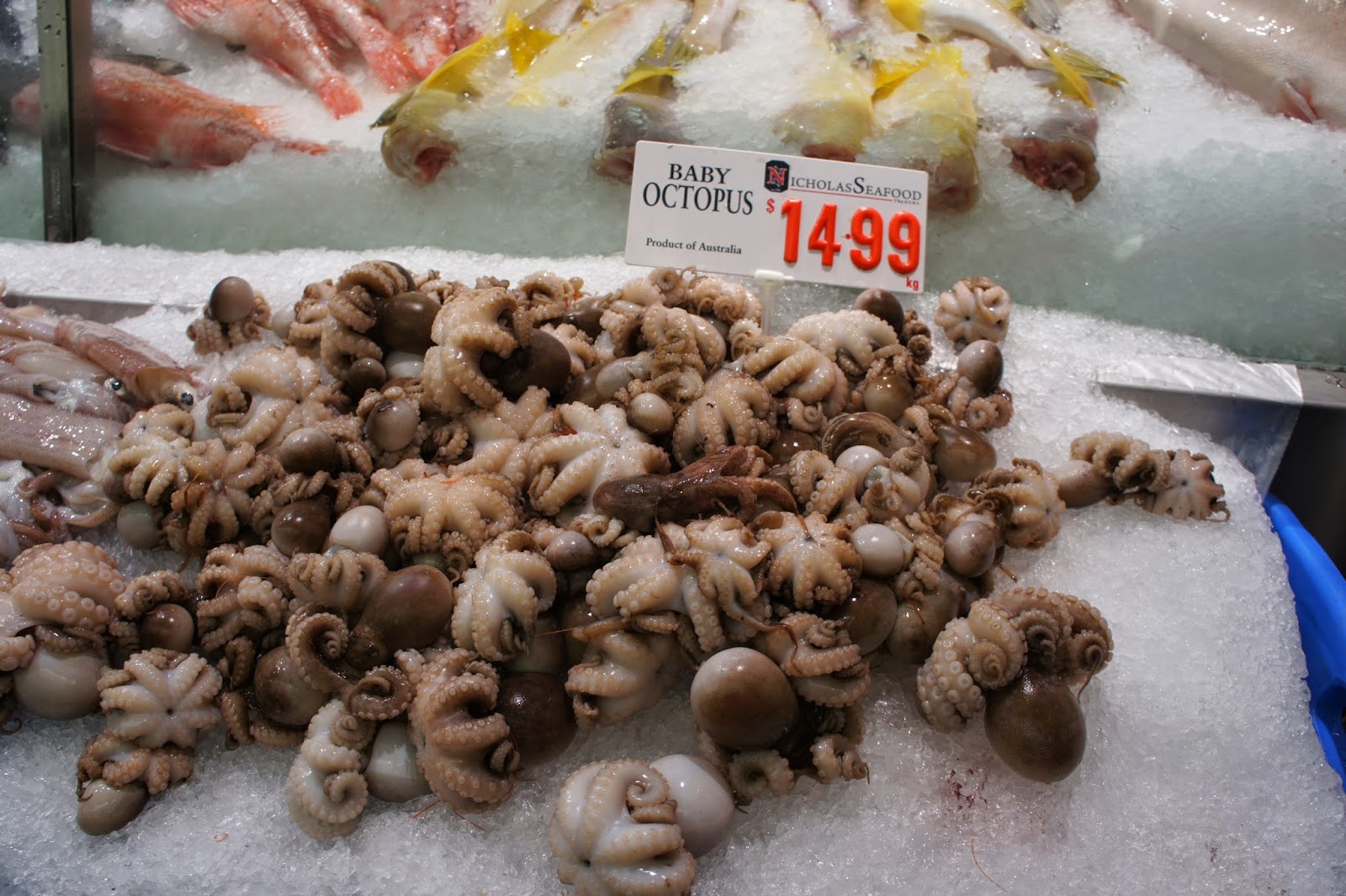 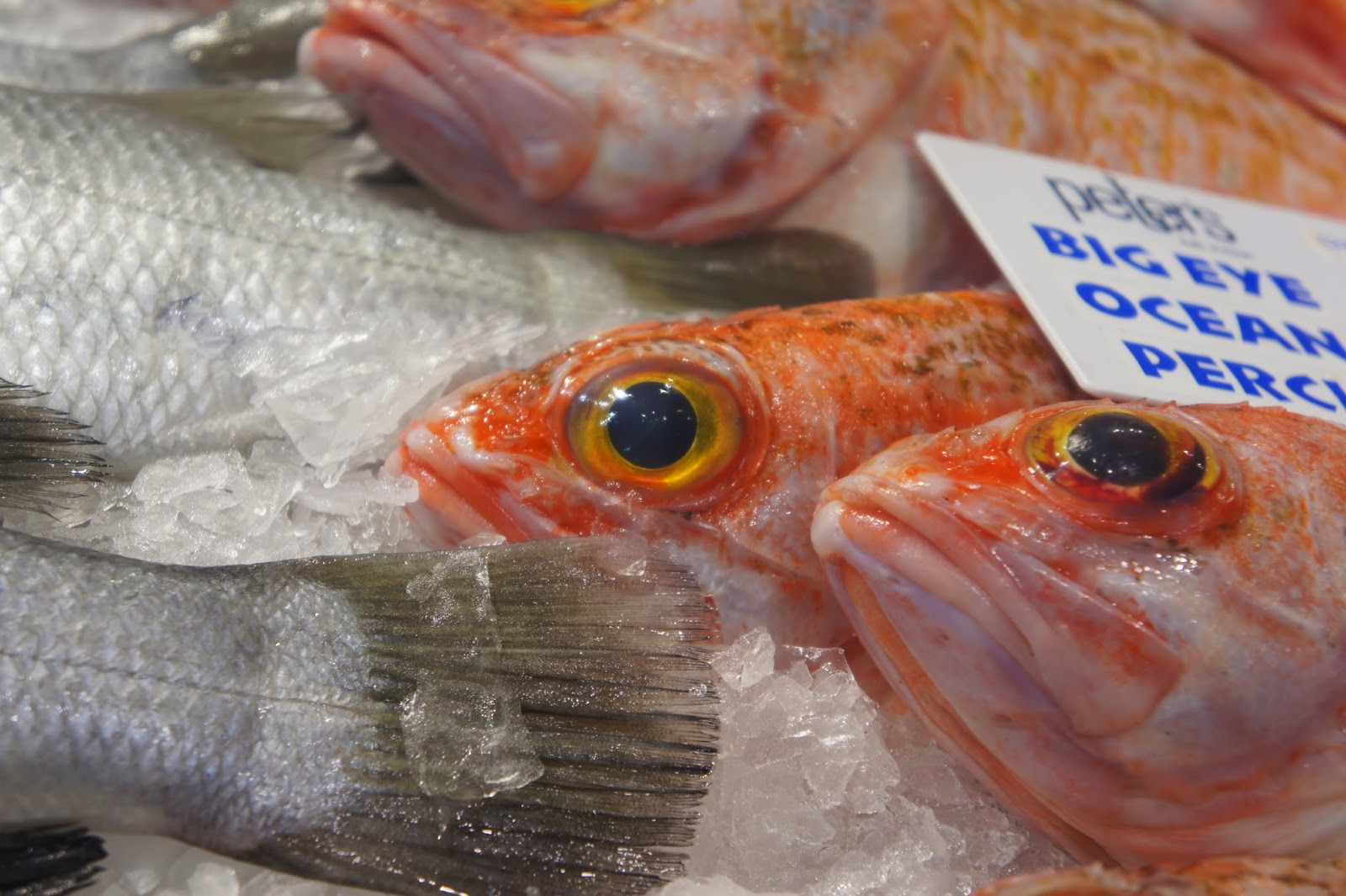 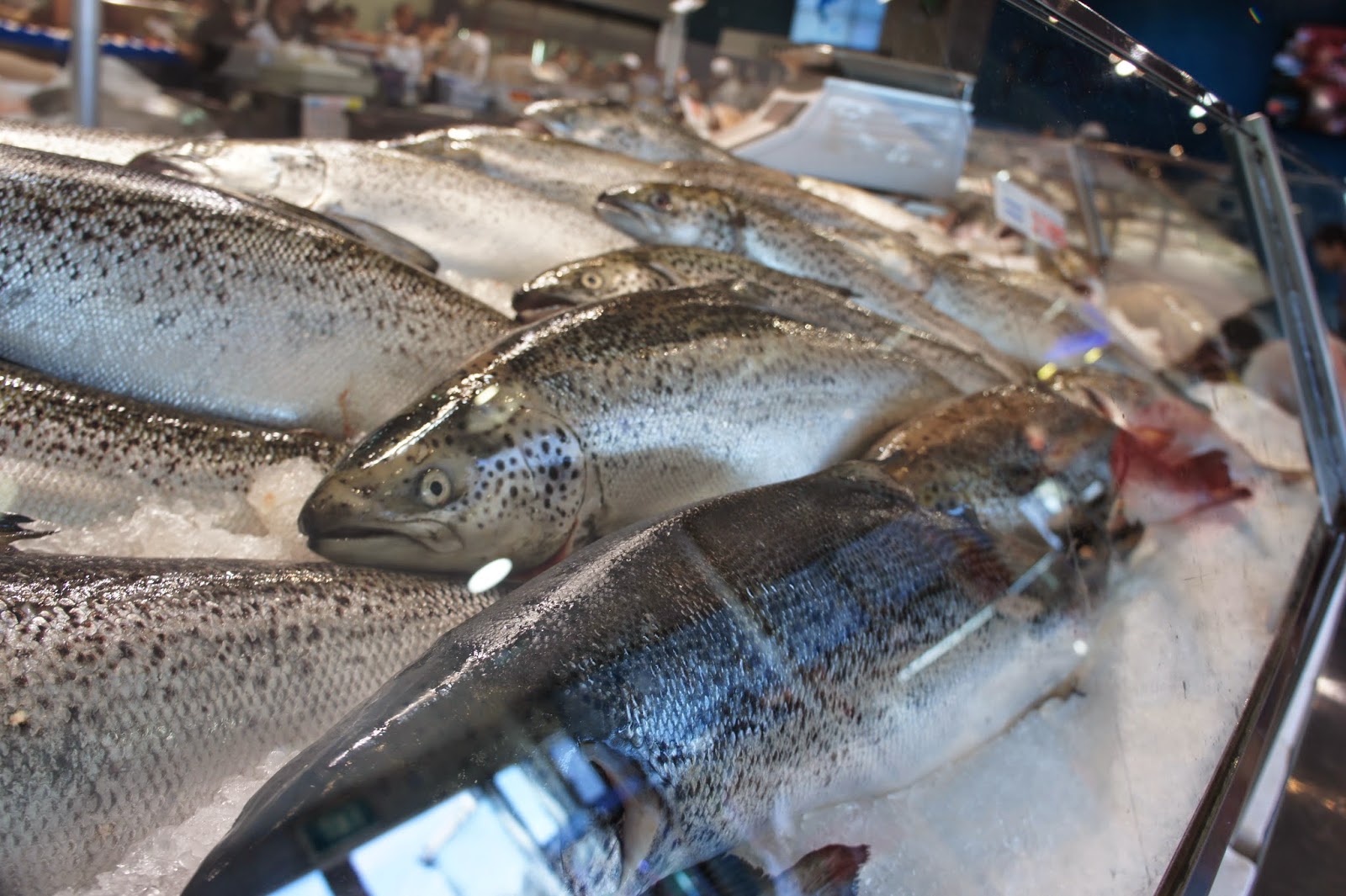 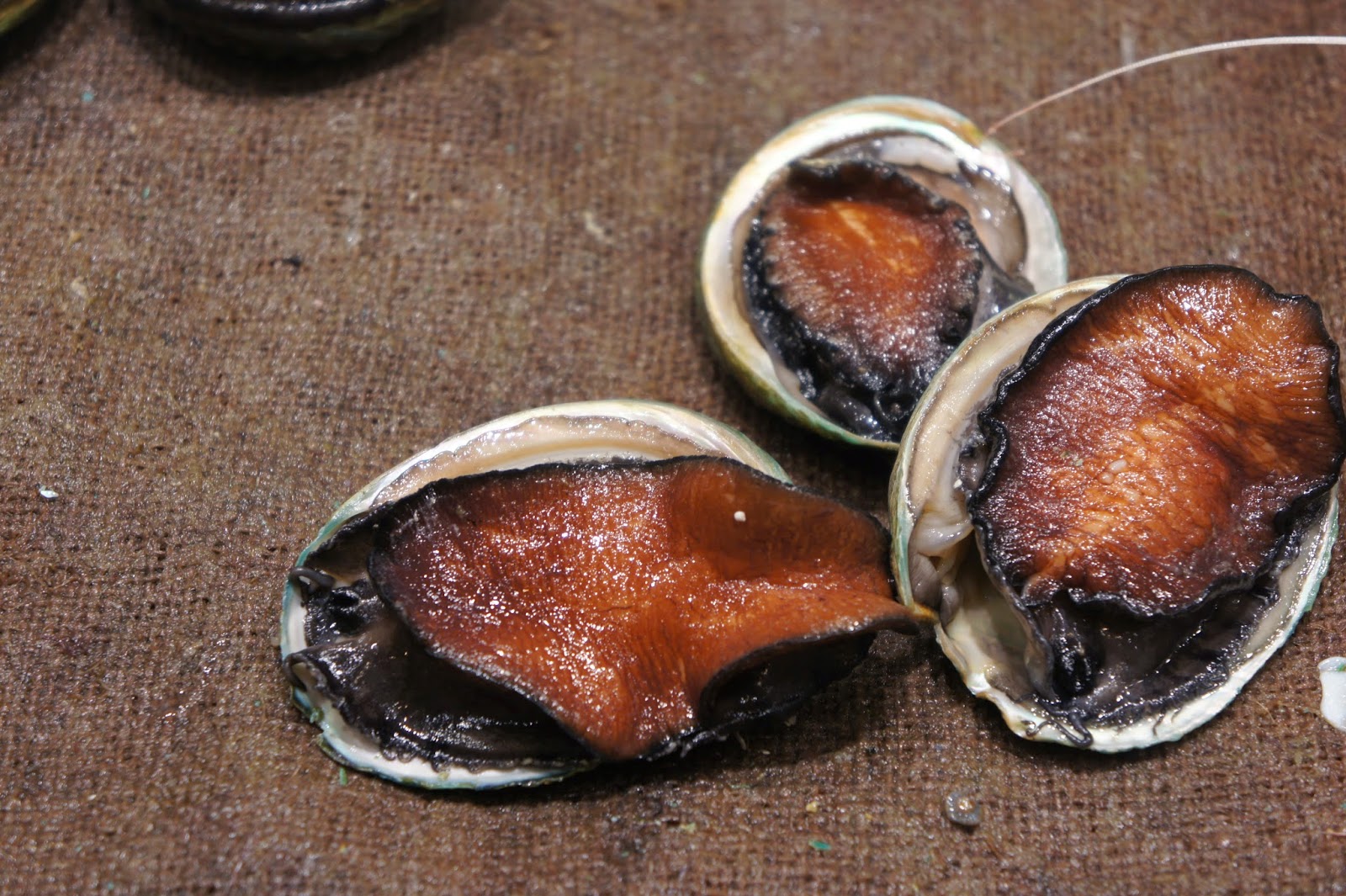 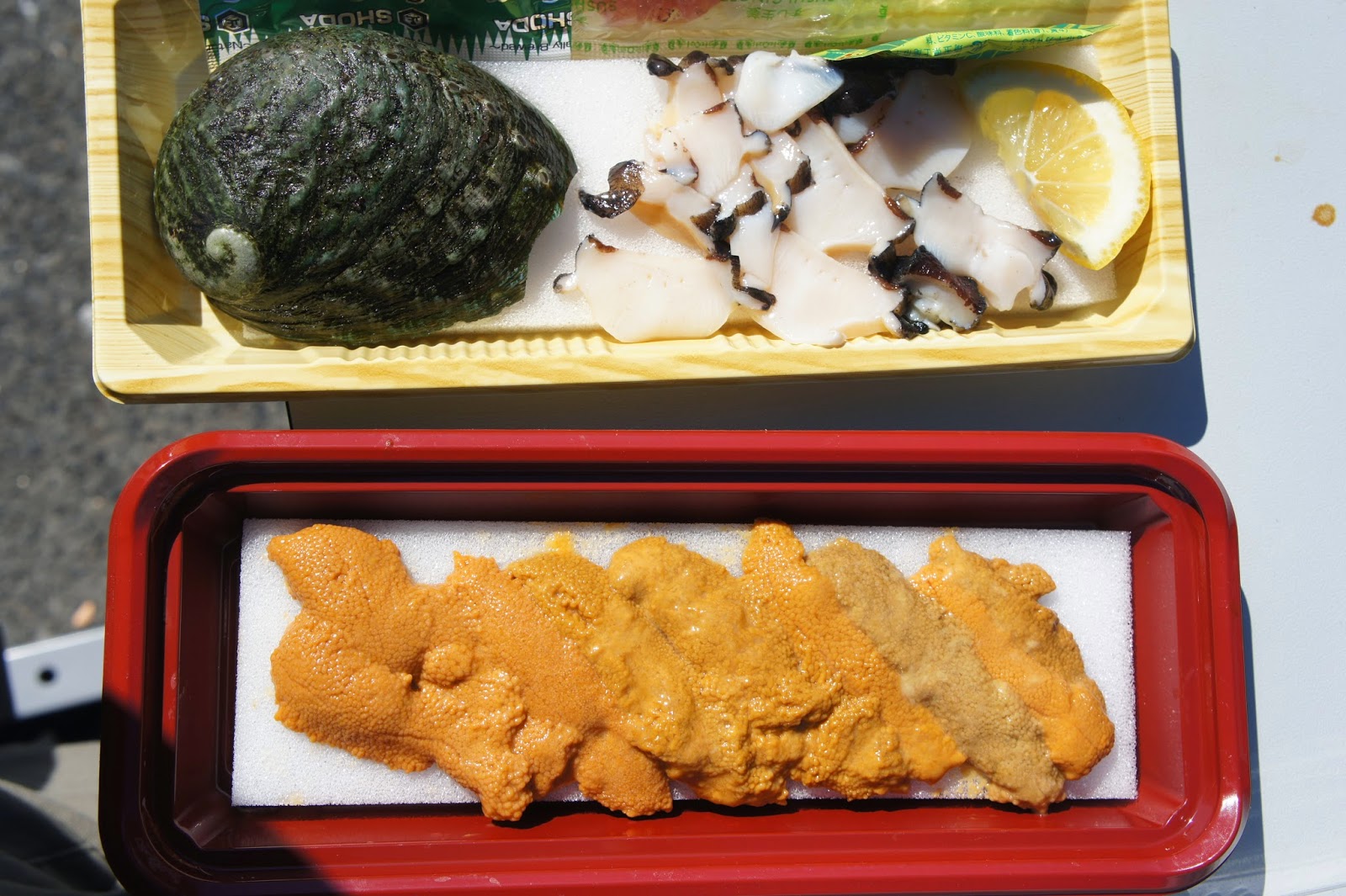 I settled on lunch picking a box of my favorite Uni (sea urchin) and some fresh abalone. The uni was very clean tasting with a hint of salt water the abalone was very crunchy without a distinctive flavor. I was in heaven eating the uni! 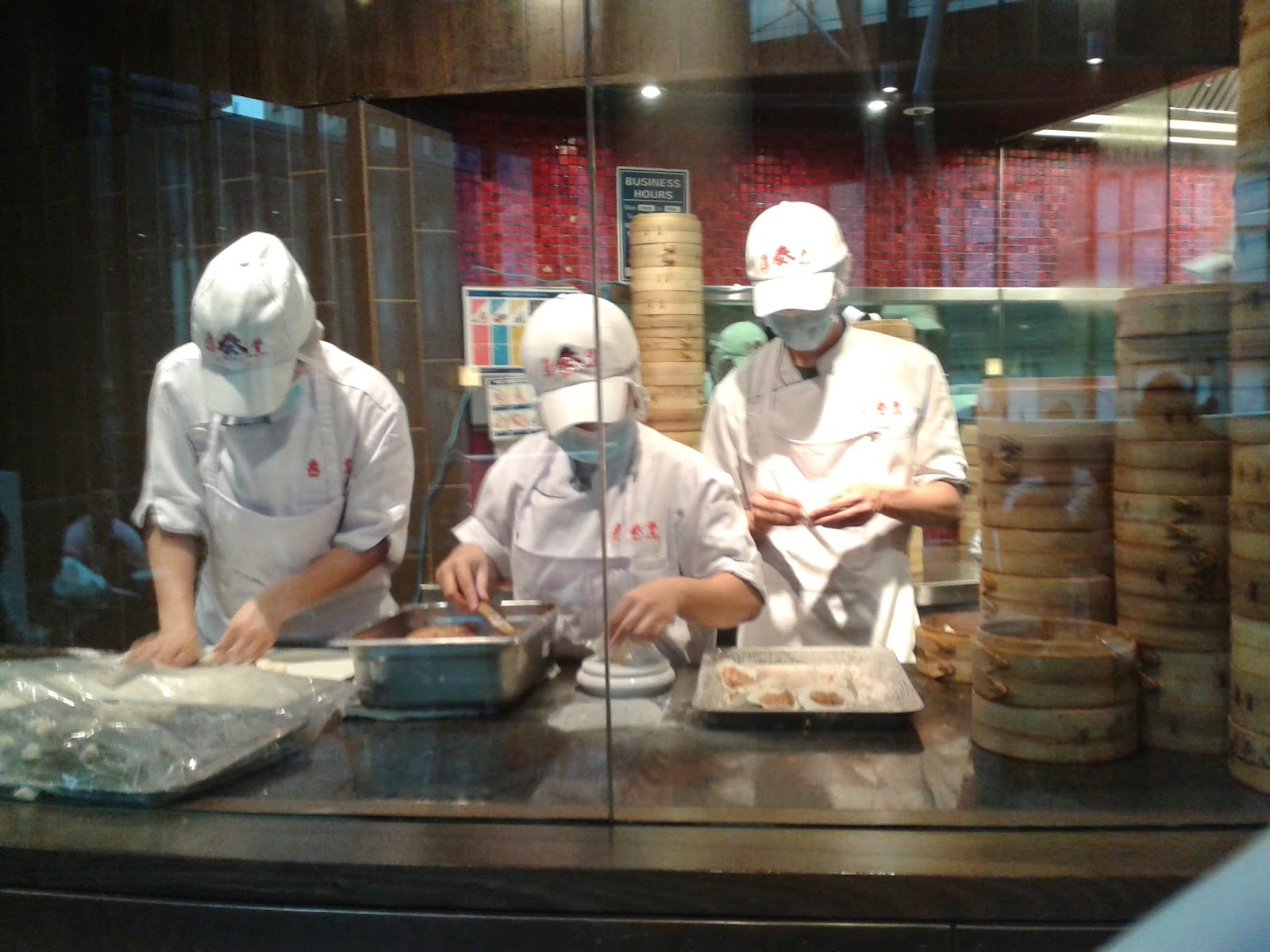 Finally, I was very excited that Sydney hosts one of my favorite restaurants Din Tai Fung. Not just one of them but three! I visited their Taiwan branch with my inlaws and had to stand in a 2 hour line to get they're famous Xiao Long Bao. The production photoed above is in the "mall food court" the guy on the left was rolling out the elastic dough, the lady in the middle was putting in the filling and measuring it on a scale and the last guy was pinching the dumplings together occasionally someone would help him as that seems to be the bottle neck in production. 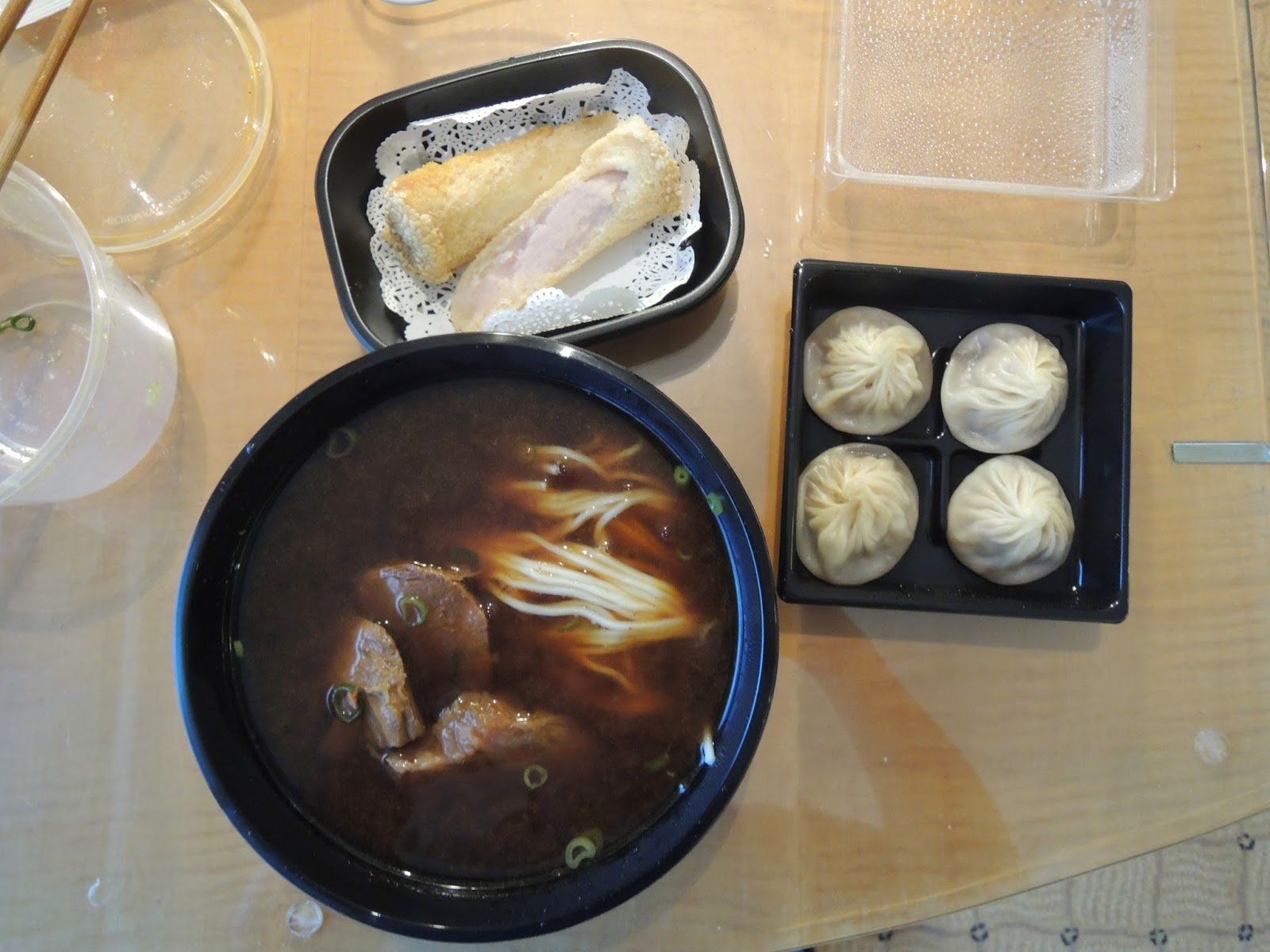 I ended up going a total of four times while I was here. Above was a meal of Red braised beef noodle soup. Xiao Long Bao, and Fried taro dessert.

It was a lovely visit to Sydney, the weather was spectacular and there is so much to do. Be prepared for a lot of walking if you come to visit but the land down under has a lot to offer we didn't even get to the beaches!